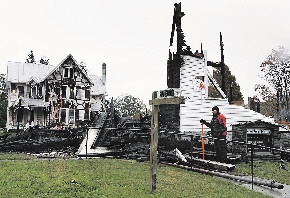 New York State Police Investigator Robert Bennett holds a survey rod in front of the remains of the Sidney Center United Methodist Church on county Route 23. In the background, the damaged exterior of the former parsonage can be seen. 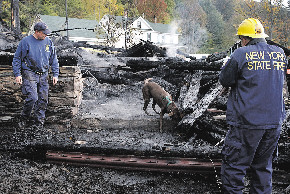 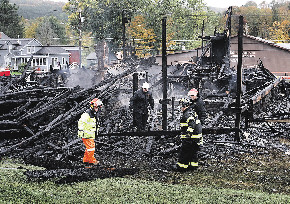 New York State Police Investigator Robert Bennett holds a survey rod in front of the remains of the Sidney Center United Methodist Church on county Route 23. In the background, the damaged exterior of the former parsonage can be seen.

The fire that destroyed the barn on Road Thirteen, also in the Sidney Center fire district, was called in about 20 minutes later, fire officials said. The barn, belonging to Glen Cove resident Rocco Innamorato, has some old furniture and other items, but officials said they did not know if it was insured. The church was insured.

Vredenburgh did not have details about why the fires were determined to be intentionally set, and it was too soon to say whether they were set by the same people, he said. When asked, he did say there was no indication the church fire was a "hate crime."

More information about the determination would be provided today, he said.

The finding that the fires were intentionally set was made by a task force led by the Delaware County Department of Emergency Services and Sheriff's Office, with the support of state police and state Office of Fire Prevention working at the scenes.

The task force was in place for several days in response to several "incendiary" fires during the past few months. More information about what the task force is dealing with will be released today as well, Vredenburgh said.

Before the arson determination was made, church trustee Carol Bennett said "we're in shock" as she watched with others as investigators and firefighters worked at the scene Thursday afternoon. She has been a church member for more than 43 years.

There was a meeting of church officials scheduled at her house today to see what the church would do in the immediate future, she said.

There are about 150 members of the church, according to Bennett. Among the items lost were the organ and the stained-glass windows, which were part of the original building from 1896, she said.

Others at the scene were Sandra DeCocker, who has been a church member for more than 60 years.

"We are like a family," she said. "Everyone has been supporting each other."

Former member James Bryden, 42, of Afton said, "I devoted 25 years of my life to the church," so the loss was painful.

"It kind of feels like part of my life went up with it," he said.

Church lay leader Ernie Bartz said he has received calls of sympathy from former pastors and other churches. He said he is fairly certain there will be Sunday services at some location. Those plans will be finalized at the meeting at Bennett's home.

The church shares a pastor, Barbara Pease, with the First United Methodist Church of Unadilla.

"It's a devastating loss," she said.

Pease came Thursday morning to see her parishioners. Many walked to see what was left of the building and found only black ashes, she said.

She talked with them about how "the people are the church" and the idea of "resurrection coming up from the ashes," she said.

The Sidney Center Fire Department received mutual aid at the church fire from Franklin, Sidney, Unadilla, Wells Bridge, Trout Creek and Walton, with about 70 to 80 firefighters at the scene, Gill said. It took about an hour to get the fire under control and two-and-one-half to three hours before it was extinguished, he said.

Because of the intense heat, water was sprayed on the nearby church parsonage to keep it from igniting, Gill said. It had been rented to Delaware County Department of Social Services to house about six foster children. All were evacuated and located at other facilities, Gill said.

The approximately 15 Sidney Center firefighters stayed at the church fire when the second alarm was called in, Gill said. Crews from Sidney, Masonville, Deposit and Otego, with about 50 to 60 firefighters, were at that scene.

There was a report of one minor injury at the barn scene, but that was not yet confirmed, Gill said.

Fire departments from Bainbridge, Mount Upton and Gilbertsville were on standby, he said.