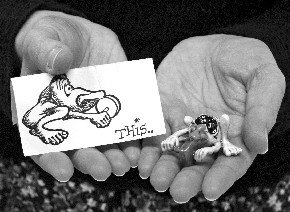 Heather Heyduk, an archivist at SUNY Oneonta, holds a ceramic trinket from the time capsule at her office in Milne Library on Wednesday. (Star photo by Denise Richardson) 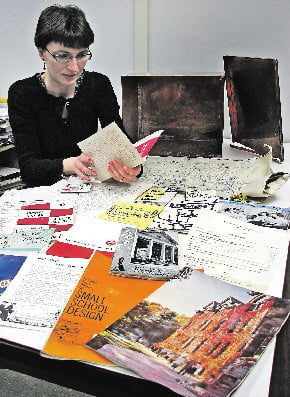 Heather Heyduk, an archivist at SUNY Oneonta, looks at items from the time capsule at her office in Milne Library on Wednesday. (Star photo by Denise Richardson)

Heather Heyduk, an archivist at SUNY Oneonta, holds a ceramic trinket from the time capsule at her office in Milne Library on Wednesday. (Star photo by Denise Richardson)

Heather Heyduk, an archivist at SUNY Oneonta, looks at items from the time capsule at her office in Milne Library on Wednesday. (Star photo by Denise Richardson)

ONEONTA _ Construction work at Tobey Hall at SUNY Oneonta revealed an unexpected artifact _ a time capsule from 50 years ago.

The capsule held brochures, a city map, a ceramic trinket, a Valentine and other papers from a half century ago.

No documentation has been found about who, why or exactly when the capsule was stored behind the 1958 date stone that was beside the main door of the dormitory at the State University College at Oneonta. College staff and construction crews said they are on alert to check for time capsules during other planned projects.

The capsule's contents are in the hands of the college archivist, who is seeking answers to the origins of the materials.

Heather Heyduk, acquisitions and special collections librarian, said she searched through the State Times college newspaper between 1957 and 1959 but found no reference to the capsule. She is heading a committee to present the materials and find other items to put into the capsule and re-install it at Tobey Hall.

Several students and a faculty member who heard about the capsule agreed the discovery was ``cool.''

Tracy Small, 19, a senior from the Bronx, said it's unusual to hear about a time capsule found locally. ``It's awesome,'' she said.

``It's almost as cool as finding a treasure chest with ancient gold coins,'' said Rick Grimaldi, professor of earth sciences.

The time capsule and its contents will be on display during the college's Reunion Weekend at the "Celebrate the Past, Present, and Future Exhibit" from 10 a.m. to 2 p.m. Saturday, June 6, in the Hunt Union International Lounge.

In October 2002, a time capsule from 1951 was replaced into a cornerstone in the renovated Human Ecology Building on campus. Computer items, a videotape and course information from the Human Ecology Department were among 2002 materials added to the 1951 items, which included with a college catalog, newspaper articles and brochures.

The capsule found this year at Tobey Hall is a copper box measuring 15 by 12 by 12 inches. The box was sealed inside a limestone crypt that had a date stone on one side.

With college officials unaware the capsule was inside, the crypt sat in a snowbank during the winter, said Jeff Hyney, supervisor with contractors Andrew R. Mancini and Associates in Endicott. One day during the January thaw, crews sent the chamber to Hobart Stone in Binghamton to have the date stone section removed. But the sawing drew sparks from the metal, he said, and an investigation revealed the capsule.

Contributors put items into the capsule that date from when the college was known as Oneonta State Teachers College, and the brochures present facts and photographs about the programs and campus.

``They definitely wanted to give an impression of where the college was at the time,'' Heyduk said. ``I thought it was really cool that 50 years ago they thought to do this.''

In an envelope, labeled "From Margaret Baughman," was a Hagen-Renaker ceramic figure with its nose to the grindstone. Baughman was assistant dean of students until 1971, officials said. She died in 2004.

The capsule will be returned to Tobey Hall and installed inside a wall, with a plaque designating its location. The installation is tentatively scheduled to take place during the rededication of the building, which may be in October, college officials said. Associate Vice President for Facilities Thomas Rathbone is coordinating the placement.

College officials shared the following story of how the capsule was found:

Demolition work on Tobey Hall began in July. The 1958 dated cornerstone was slated for disposal, but it seemed architecturally valuable, and crews suggested salvaging the stone and finding a place for it within the reconstructed building.

Thus, the cornerstone was saved. The limestone panel was attached to a larger piece of masonry, about 24 by 24 inches, which appeared to be solid stone.

The masonry block couldn't be installed into the existing brick facade, which is 4 inches deep, and the block was sent to Hobart Masonry in Binghamton, where crews could ``slice off'' the dated section. After sawing revealed the metallic lining, the stone yard notified the contractor. A laborer at the stone yard chipped around the block, and after about an hour realized that the saw had created an opening. The laborer used a flashlight to peer through the quarter-inch opening and saw papers inside.

The sawyer adjusted the saw to 3.5 inches to open the block, and the capsule inside the limestone crypt was revealed.

The crypt, dated stone and time capsule were returned to Tobey Hall the next day, which was in early February.

Heyduk said she was appointed chairman of the ``time capsule committee'' during a meeting Feb. 20. The group will include students, faculty, staff and administrators and be responsible for the display at Reunion Weekend and identifying contents for the re-installed capsule.

``I'm looking forward to working with the committee and hearing everyone's ideas,'' Heyduk said. ``It's going to be fun.''

SCHENEVUS - Kurt A. Prager, 50, passed away peacefully March 5, 2021, following a long health battle. A memorial and Masonic service will be held later this spring. Expressions of sympathy may be shared at www.hellerskinnerfh.com.