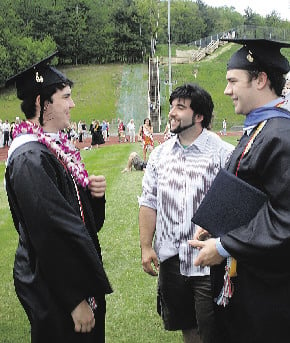 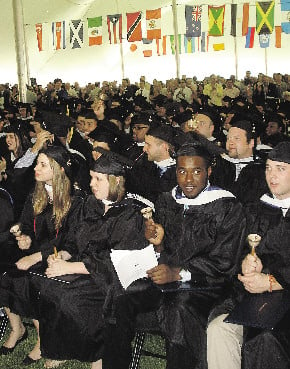 Hartwick College graduates ring bells they were given that symbolized their academic achievements and connection to Hartwick during the college's commencement ceremony Saturday.

Hartwick College graduates ring bells they were given that symbolized their academic achievements and connection to Hartwick during the college's commencement ceremony Saturday.

ONEONTA _ In a procession led by bagpipers, Hartwick College graduates and professors in black and jewel-colored robes walked into a giant white tent on Elmore Field for a commencement ceremony marked by talk of the recession and lots of bell ringing.

West Street and Hartwick's hilly campus were full of cars with license plates from Massachusetts, Connecticut and Vermont, and local restaurants were reservation-only Saturday as 322 students from 25 different states and eight countries graduated from the private liberal-arts college.

Hartwick President Margaret L. Drugovich presided over her first ceremony with words of Hartwick's far-reaching influence and a reminder for students to be grateful to those who had helped them through the years.

Drugovich instructed students to rise, turn around and acknowledge their families with applause for their support. Then, she had students turn to their professors and applaud them as a sign of gratitude.

The commencement speaker was Cyrus Mehri, a class of 1983 graduate and lawyer involved in some of the largest race and gender class-action lawsuits in U.S. history, including those against Texaco Inc., The Coca-Cola Company and Morgan Stanley.

Mehri did not talk about choosing the road not taken or the world being an oyster. But he also did not side-step the significance of the economic downturn, likening it to the Great Depression of the 1930s.

"These are sobering times ... It's the closing of an era of recklessness and the beginning of a new era of responsibility," he said. "Class of 2009, you are the new wave of change."

He urged students to take advantage of opportunities to rebuild civic societies; for example by being involved in health care reform or participating in Teach for America.

Highlights of the ceremony included an a cappella group's rendition of Huey Lewis & The News' "It's All Right," to which graduates and audience members clapped along. Also, graduates were given bells to ring when instructed that symbolized their academic achievements and "eternal connection" to Hartwick, among other things.

"I feel a little overwhelmed," said Patricia Otis, of West Winfield. "It was an awesome program, and I feel blessed to have had the chance to do it."

Otis, who completed a nursing program at Hartwick that partnered with Bassett Hospital, where she works in the birthing center, was a nontraditional student as a 35-year-old.

"She's amazing," said Otis' coworker, Jessy Barrett, of Schenevus. "And she has six kids, too!"

"Some of my favorite memories of Hartwick were my fraternity, field trips with the geology department and working with the kids at Riverside (Elementary School)," said Avery, who graduated with a geology degree and is student-teaching at Cooperstown High School in the fall.

"They (Hartwick) set you up with a series of situations that really help you grow," Avery said.

"It was great," said Tweedie of his four years at the college. The history major said he was looking for a job as a social-studies teacher and plans to study part-time for a master's in history at either SUNY Albany or SUNY Binghamton in the fall.

"Hartwick's made me who I am today," he said. "I came here a naive freshman. I'm leaving here a naive graduate, but I learned a lot in between."