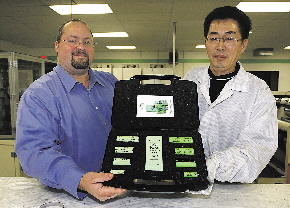 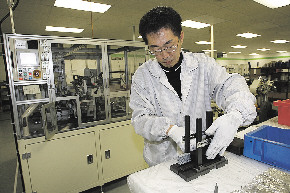 Eun-Sung Lee, a manufacutring manager, works on an ultracapacitor at Ioxus Inc. in Oneonta on Thursday.

Eun-Sung Lee, a manufacutring manager, works on an ultracapacitor at Ioxus Inc. in Oneonta on Thursday.

ONEONTA _ Ioxus Inc. has been building inventory, developing applications and finding markets for its ultracapacitors since production started in July.

Ioxus produces electric double layer capacitors _ also known as ultracapacitors or supercapacitors _ in a variety of sizes. In most applications, an ultracapacitor doesn't replace a battery but does make it last longer by reducing spikes of current, product descriptions said.

Ioxus ultracapacitors are developed for use in forklifts and other vehicles, wind-energy development, telecommunications and in retrofitting energy devices.

Production machinery is humming five days a week in the plant at 118 Winney Hill Road in the town of Oneonta, Chad Hall, Ioxus chief operating officer, said during a tour Thursday.

On July 13, Ioxus made its first sale toward a goal to supply an emerging market, Hall said, when it sold 365 ultracapacitors to an undisclosed buyer.

Rob Robinson, president and chief executive officer of the Otsego County Chamber, said Ioxus is the result of entrepreneurship that is introducing a newly developed product into a growing market. Finding venture capital is difficult, he said, and the founders ``took a real big chance,'' the result of which is a ``long-term, viable growth industry for Otsego County.''

The area has long needed light-manufacturing jobs, Robinson has said.

Hall said the manufacturer is a spin-off of Custom Electronics, which is a co-owner of Ioxus with Braemar Energy Ventures.

Bradley Friis, a cell-production technician, said he started working at Ioxus in March.

``It's interesting learning about the new technology,'' he said Thursday, after taking an ultracapacitor from the production line.

Ioxus staff levels are projected to be 30 to 35 employees by mid-2010, 60 to 65 the following year and about 95 workers in the third year, Hall said. Production workers, who earn a minimum of about $10 an hour, have been hired locally, he said, and searches for more-specialized employees involve national searches. Three employees are from South Korea and have relocated with their families.

According to Ioxus' business plan, the worldwide market demand for small- to medium-sized ultracapacitors is expected grow nearly 20 percent within five years. Company officials said the employee total could reach 180 or 185 within five years.

Ioxus has received grants, loans and other funding assistance through Otsego County, the New York State Energy Research and Development Authority as well as private venture capital. Hall said government-related sales could help the firm as it starts up during a recession.

``Our market seems to be supported well by the government,'' Hall said.

CARSON CITY, Nev. - Joan K. Mayhew, 86, a former resident of the Village of Cooperstown and retired first grade teacher, passed away Tuesday evening, May 25, 2021, at Carson Tahoe Care Center in Carson City, Nevada. Born Aug. 6, 1934, in Oswego, Joan was a daughter of Frank and Clara (Bears)…