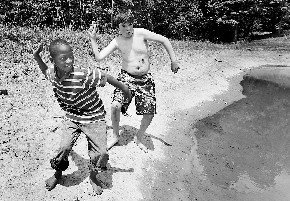 Gavin Thomas, from the Bronx, left, skips stones with Aidan Woishnis at his home in Gilbertsville on Sunday. Aidan and his parents are serving as a host family to Gavin, as part of the Fresh Air Fund program. 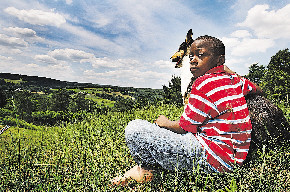 Gavin Thomas, 9, of the Bronx, and his host family-s dog, Cynda, look over the Butternut Valley in Gilbertsville on Sunday. Gavin is a participant of the Fresh Air Fund program that allows inner city youth to travel outside the city to visit host families during the summer.

Gavin Thomas, from the Bronx, left, skips stones with Aidan Woishnis at his home in Gilbertsville on Sunday. Aidan and his parents are serving as a host family to Gavin, as part of the Fresh Air Fund program.

Gavin Thomas, 9, of the Bronx, and his host family-s dog, Cynda, look over the Butternut Valley in Gilbertsville on Sunday. Gavin is a participant of the Fresh Air Fund program that allows inner city youth to travel outside the city to visit host families during the summer.

GILBERTSVILLE _ From a hilltop, Gavin Thomas, 9, can see lush trees and fields and a few homes and barns across the Butternut Valley.

He is more accustomed to the concrete and bricks of New York City. But as a guest of Aidan, 12, and Bill Woishnis and Jeri Wachter, Gavin can spend part of this month swimming in a pond, hiking in the woods and riding a horse, among other outdoor activities.

Gavin, who arrived and met his host family in Oneonta's Neahwa Park on Thursday, is among about 50 children in the Fresh Air Fund sessions this summer. The current session ends July 17.

Families in Oneonta, Norwich, Sidney, Walton and Bainbridge also have invited children to their homes to take a break from sweltering city heat, and organizers said they still are looking for families to participate in the Aug. 1 to 11 session.

Since 1877, The Fresh Air Fund, a not-for-profit agency, has provided free summer vacations in the country to more than 1.7 million New York City children from disadvantaged communities, according to the organization's website. Each year, about 5,000 children visit volunteer host families in 13 states and Canada through the Friendly Town Program or attend a Fresh Air Fund camp.

Darlene Pondolfino, chairwoman for Oneonta Friendly Town, said she is interviewing families this week and about 1,200 children await placements.

In Gilbertsville on Sunday, Woishnis said Aidan anticipated Gavin's arrival with excitement. The family had called Gavin in New York City before his visit. On Sunday, Aidan was showing Gavin how to skip rocks across the pond near the house.

Gavin said he has had fun playing tag with the family's collie, Cynda. He knows how to meow and has managed to coax the cat, Shayde, into being held.

Wachter, who grew up in New York City, said she wanted to participate in the program to make a friend and exchange views between city and country life.

``Growing up in the city, I know that other angle,'' Wachter said. A favorite activity of hers is hiking in the woods, and she said she looks forward to taking the boys out to explore nature.

The couple moved to Gilbertsville 14 years ago and have a business, William Andrew Publishing, in Norwich.

Gavin said he lives in the Bronx with his mother, a brother, Marvin, 12, and some aunts and cousins. This summer is his fourth with the Fresh Air program.

On July Fourth, the family went to an ice-cream social in Gilbertsville and from home watched fireworks across the valley.

Helen Regenbogen, representative for the fund's Central Leatherstocking region, said families take children berry-picking, swimming, to parks and camping. Star-gazing, walking barefoot in the grass or seeing a frog are new experiences for some children, she said.

``Everyday things that we do, that we take for granted, are a big deal to them,'' Regenbogen, of Nineveh, said.

The children are between the ages of 5 or 6 and 13, and hosts may choose an age and gender, organizers said. About 75 percent of the children are invited to return, they said, and in such cases, a child may stay longer than the designated visiting periods and also may return until age 18.

Pondolfino said children have been placed in traditional families and in homes with single mothers, retirees and same-sex couples. Retirees are encouraged to host two unrelated children, she said.

The application process includes a family interview, a visit to the home and a background check, Pondolfino said.

Regenbogen said she was a Fresh Air visitor when she was growing up in Astoria.

Regenbogen said she couldn't wait to move to the country. This summer, Donte Spence, 11, of the Bronx, is returning to spend six weeks with her on his fourth visit. Host families, she said, benefit from the program as much as their visitors.

BAINBRIDGE - On Jan. 10, 2022, it was discovered that Douglas Richard Anderson, 75, had passed away at his home. Cause of death was later determined to be the COVID-19 virus. Douglas was the first of two children born to Damia L. and Richard Elmer Anderson in Schenectady. Doug graduated from…