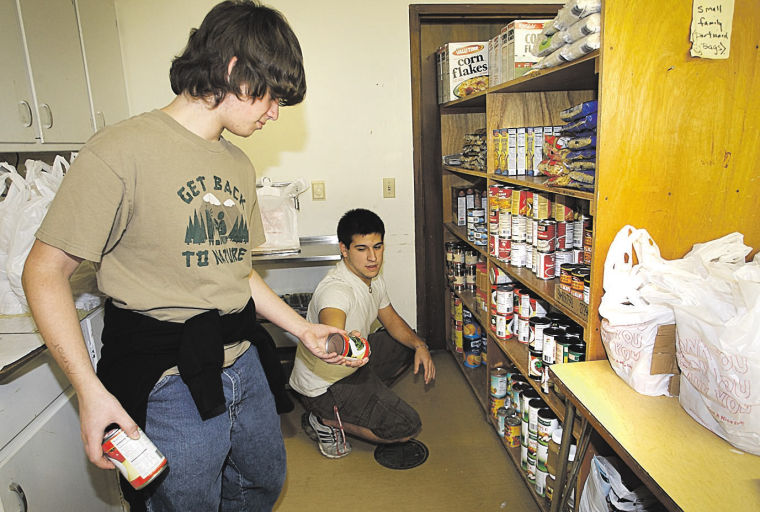 Volunteers Matt Langsdorf, left, and Danny Reis, both freshmen at the State University College at Oneonta, work in the food pantry at the Salvation Army on River Street on Friday. The two are volunteering as part of a community service project for a geography class. 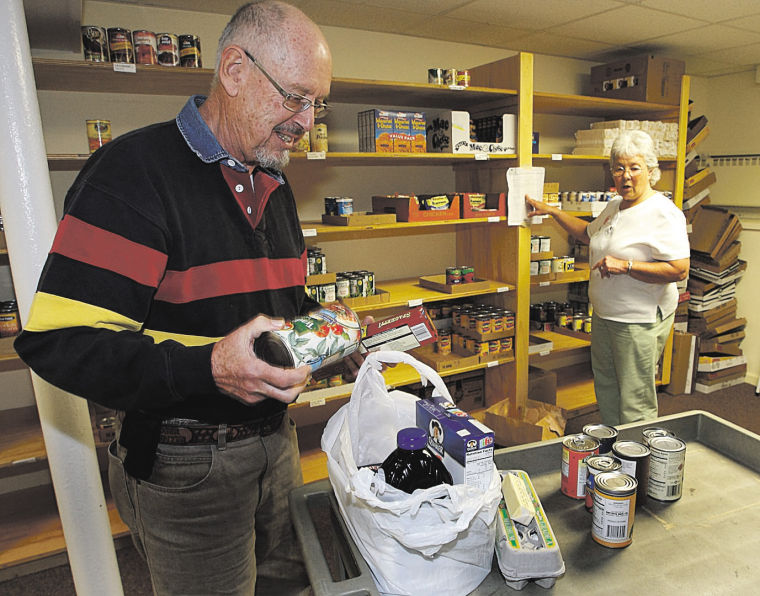 Carol Hubbard, treasurer of the Sidney Area Food bank, checks a list as she and volunteer Cliff Konnerth of St. Luke-s Lutheran Church pack an order in the food bank at the Sidney United Methodist Church on Liberty Street in Sidney.

Volunteers Matt Langsdorf, left, and Danny Reis, both freshmen at the State University College at Oneonta, work in the food pantry at the Salvation Army on River Street on Friday. The two are volunteering as part of a community service project for a geography class.

Carol Hubbard, treasurer of the Sidney Area Food bank, checks a list as she and volunteer Cliff Konnerth of St. Luke-s Lutheran Church pack an order in the food bank at the Sidney United Methodist Church on Liberty Street in Sidney.

"Places like this are like a godsend," said an Oneonta woman accessing services at the food bank at the Oneonta Salvation Army on Thursday. The woman, who asked to remain anonymous, said since her husband was disabled in an auto accident two and a half years ago, she and her three grown children are struggling to get by while they await the results of a lawsuit. This was the first time she had to use the Salvation Army food Bank, but has twice used services from other local agencies.

"I don't like doing this, but sometimes you have to," she said.

"Last month we ran out of food and had to refer people to other area pantries," she said.

This has only happened a couple of times previously in the 37 years she has worked there, she said.

The anonymous woman said that she was hopeful the family's fortunes will change with a lawsuit from the accident. "I will be giving back," she said.

The service was similar to others in the area, available once a month and providing about three days of food often in such staples as pasta, canned vegetables, juices and macaroni, Haines said.

Fresh fruits and vegetables and baked goods are sometimes available.

There are no income requirements, she said.

"We realize everyone runs into trouble" for a variety of reasons, she said.

The overall situation is similar at St. Mary's Food Bank, also in Oneonta, according to outreach coordinator Janice Hinkley. September was the busiest month, with 178 households including 595 people served.

"That is the highest we've ever had," she said. In October, there were 593 people served. She blamed the upswing on the economy.

More people are coming in saying they lost their jobs or had their hours cut, she said.

The economy is also affecting donations, with numbers decreasing in the past six months, she said.

Hinkley said that although college students and other groups often conduct food drives at this time of year, it was too early to tell how these efforts might affect the food bank's holdings.

Even people who are doing relatively well are being more careful, she said. "They keep saying things are getting better _ I don't see it," she said about news reports about the economy.

But Hinkley said she is a careful shopper, buying items that aren't covered by donations, often at the Regional Food Bank of Northeastern New York as well as purchases at local grocery stores.

The needs of the Cooperstown Food Bank have been growing because of the economy, said volunteer Ellen St. John. The food bank provided help for 3,417 people in 2005 and 6,169 people in 2008. It will probably break that total this year, she said. The community has stepped up its contributions to support the effort, she said.

"We are so fortunate," she said.

Opportunities for Otsego chief executive officer Dan Maskin said that his organization is involved with making holiday baskets. It's too soon to tell what the demand will be, but the effort will be hampered by the regional directive from the Post Office canceling a food drive for the effort.

This usually raises about 6,000 pounds a year. "Our challenge is to make that up," he said. Even if the numbers are the same as last year, that is still a deficit.

Maskin's organization is also involved with delivering items from the Regional Food Bank to food pantries in Unadilla, Richfield Springs and Hartwick. It also picks up perishable items on a daily basis from Price Chopper and Hannaford supermarket for distribution to local feeding programs and food pantry services, he said.

The numbers are up in Delaware County, Linda Vausse, food bank coordinator for Delaware Opportunities, said. The agency served 650 families in the county in October. That is about one-third more than a year ago, Vausse said. The central food bank also supports 14 food banks in towns around the county.

"There are some pretty sad stories from people coming in," she said. "It's a sign that things are not good."

Vausse said all the food pantries are struggling. The service relies heavily on donations, especially at this time of year, for holiday dinners.

The Scout food drive this Saturday will help, but "donations of food and money would be wonderful."

Vausse said she relies heavily on the Regional Food Bank to supply 14 food banks in the county in such places as Sidney, Davenport, Walton. There is one at the Delaware Opportunities building in Hamden.

"Sidney is one of our busiest locations," she said.

That site, in the Sidney United Methodist Church on Liberty Street, is seeing a steady number of people, said Ellen Reuter, one of the directors of the Sidney Area Food Bank. There are seven different churches that provide volunteers to operate the service on Monday and Thursday.

So far the needs not covered by Delaware Opportunities are being handled by the increased generosity of the community.

This includes businesses and the general public, a local farmer and farm stands are helping out as well, she said. The food provided by Delaware Opportunities meets about half the community needs.

"We have a good community that is very supportive," Reuter said.

Carol Hubbard has been volunteering at the site for about 10 years. She was helping the other volunteers on Thursday as they gathered food for a family of five, that did not want to talk about their situation.

The shelves were a little bare because a shipment was due from Delaware Opportunities on Friday, she said.

Clients need proof of residency, but there are no questions asked about income, she said. "We want to serve whoever needs it."

Area food banks and related services can use donations of food and money. Services mentioned in the article are:

AFTON - Laurence F. "Fred" Thomas Sr., 78, of Afton, passed away on Wednesday morning, Dec. 2, 2020, at his home. He was predeceased by his wife, Diane Thomas; daughter, Ann Grace Thomas; and brother, Ray. He is survived by six of his children, Laurence F. Thomas Jr., Timothy P. Thomas, Gary…