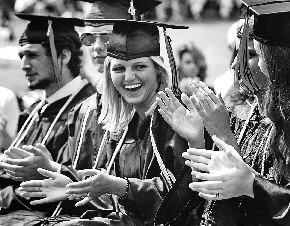 Cooperstown Central School graduate Claire Boutain Petroskey cheers in excitement with fellow students as they get ready to walk across the stage at their graduation ceremony Sunday. 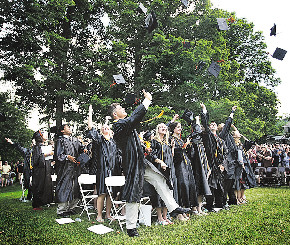 Graduates of Cooperstown Central School-s class of 2008 toss their hats into the air at the end of the graduation ceremony at the Fenimore Art Museum in Cooperstown on Sunday.

Cooperstown Central School graduate Claire Boutain Petroskey cheers in excitement with fellow students as they get ready to walk across the stage at their graduation ceremony Sunday.

Graduates of Cooperstown Central School-s class of 2008 toss their hats into the air at the end of the graduation ceremony at the Fenimore Art Museum in Cooperstown on Sunday.

``Commencement is naturally a time to celebrate success and the promise of the future,'' Laura Resnick, Cooperstown senior class president, told classmates and the crowd at the Fenimore Art Museum. ``The hard task for most of us will be leaving Cooperstown.''

Hundreds of relatives, friends and educators gathered on the lakeside lawn behind the museum to watch 90 graduates and four exchange students at the 129th annual commencement.

A slight breeze moved clouds, which sheltered spectators as students received diplomas, gave speeches and were recognized with scholarships and awards.

Resnick, of Cooperstown, said 49 students in the senior class had attended Cooperstown Central School since kindergarten, creating a bond throughout the years. Fifteen graduates were on their way to attend out-of-state colleges, she said, and seven were going to foreign countries on Rotary exchange programs.

Attending Cooperstown Central School has been a blessing, not a drawback, Resnick, 17, said, because its small size provided an environment where students could develop academically and socially, participate in activities and easily find guidance from educators.

But however promising the future appears, Resnick said, the reality is that failure ``at some point and in some form, awaits us all.'' She cited the experiences of Winston Churchill, Abraham Lincoln, Henry Ford and Michael Jordan as examples where ``failure was no match for perseverance.

``Failure challenges us and teaches us,'' Resnick said. ``Failure should be seen as a stepping stone toward success.''

Busse and other students said Sunday was a day marking ``the start of new beginnings.''

Mark Rathbun, school board president who leaves the board today after 12 years, shook each graduate's hand and patted each on the arm or back as diplomas were handed out. He shared ``congratulations'' or ``job well done'' with each.

Bob Birch, of Cooperstown, said the class of 2008 is special, as are the families who nurtured students. He said he and his wife, Marcy, were pleased with the accomplishments of Jonathan, 17, who will be a Rotary exchange student in Brazil next year and plans to attend McGill University in Montreal later.

``The weather is beautiful,'' Kuch said to the gathering as students sat bathed in sunshine. ``Whatever prayers you said, we appreciate.''

Rain sprinkles fell Sunday morning, he said, but between 10 and 10:30 a.m., the decision was made to have the ceremonies outdoors instead of in the school's gymnasium.

Parent applause and birds chirping punctuated proceedings at the museum grounds, and Glimmerglass Lake water rippled in the background.

``Look at this spot,'' he said, gesturing toward the surrounding lush landscape. ``It's gorgeous.''