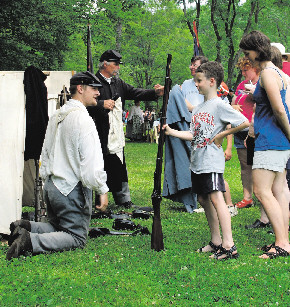 Jacob Maley lets Liam Jennings hold his gun to see how heavy it is at a Civil War camp display. The camp was part of Saturday’s Ice Cream Social in Oneonta’s Wilber Park. (Photo by Cheryl Clough) 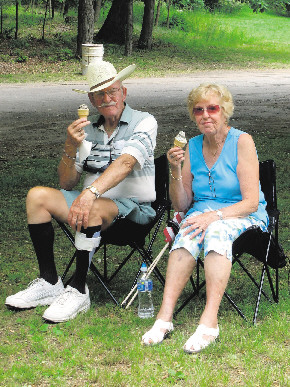 Connie and Bill Osterhout of Oneonta enjoy ice cream cones under a shade tree in Wilber Park on Saturday. (Photo by Cheryl Clough)

Jacob Maley lets Liam Jennings hold his gun to see how heavy it is at a Civil War camp display. The camp was part of Saturday’s Ice Cream Social in Oneonta’s Wilber Park. (Photo by Cheryl Clough)

Connie and Bill Osterhout of Oneonta enjoy ice cream cones under a shade tree in Wilber Park on Saturday. (Photo by Cheryl Clough)

ONEONTA _ The firing of guns from a Civil War re-enactment, tunes of a barbershop quartet and visits by a tortoise and a lizard were among attractions at the Oneonta Centennial Ice Cream Social in Wilber Park on Saturday.

The social offered activities that appealed to different members of his family, said Tom Jennings, of Oneonta. His son Liam, 8, is a Civil War enthusiast, Jennings said, and his other son, Kieran, 6, took an interest in wildlife presented by the Utica Zoomobile.

Bob the tortoise, about the size of a basketball, is 13 years old and could live to be 100, said Mary Hall, Zoomobile education manager, to a small group.

She picked up Chooch, an Egyptian spiny tailed lizard that had been crawling freely on the grass, and held him for petting. A woman marveled aloud at the softness of Chooch's skin.

``You wouldn't think a lizard has a personality, but Chooch does,'' said Hall as she held him. ``He's friendly.''

Children and adults strolled among the three ice cream stands, the tents of the Civil War re-enactors and the Utica Zoomobile. The Farmers' Museum presented games and demonstrations.

Applebaugh Gardens, where activities started after 1 p.m., was lined with U.S. flags in honor of the city's anniversary and Flag Day. Mayor John Nader and Tanya Shalor, publisher of The Daily Star, which sponsored the event, welcomed guests and invited them to have ice cream, which was offered in cotton candy and peanut buttercup flavors as well as traditional vanilla, chocolate and strawberry.

The Steppin' Out Barbershop Quartet performed "The Star Spangled Banner" at the flagpole in the gardens. The singers then wandered to the other side of the park, stopping to perform here and there, before giving a concert in the Showmobile. The Sweet Adelines also performed.

Storm clouds moved in later in the afternoon, but showers didn't fall until about 4 p.m., toward the end of the social.

John Arlet, of Oneonta, said ice cream was a ``good lure'' for a community activity. He and his wife, Ilene, said they appreciated the event. Before the advent of radio and television, people would spend time at such functions, Ilene said.

``It sounds so quaint,'' she said. ``People should socialize more and do things like this.''

Brad Morley, of Oneonta, was headed toward the Civil War encampment and said he was waiting for his daughter and two granddaughters to arrive before getting ice cream and spending time together for Father's Day.

Ted Shuart, who lives in Cobleskill, donned a Civil War uniform Saturday. He shared the history of the 124th New York Volunteer Infantry out of Rensselaer County, which he said would have known troops from the Oneonta area. Shuart described his uniform and mentioned battles the 124th faced as part of re-creating history.

``That's what we're all about,'' Shuart said, standing outside three tents and displays of artifacts.

Rene Prins, director of the Oneonta Community Concert Band, presented the mayor with a manuscript of ``Centennial March.'' He wrote the march in honor of the anniversary and conducted the band in its premiere. The band's program otherwise featured music that might have been heard about 100 years ago, including ``Take Me Out to the Ball Game.''

Under a bill signed by the governor in 1908, the village of Oneonta became a city.

Centennial Committee members are working on a souvenir publication, which may be available at Fourth of July activities in the city, Herrick said, and other events are planned throughout the rest of the year.

They include a hot-air balloon festival on Labor Day weekend and a parade Oct. 4, the weekend of the Pit Run race and the Oneonta High School reunion.