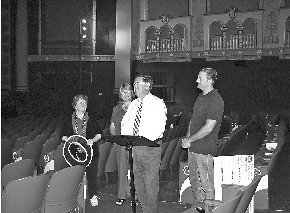 On Wednesday at the Oneonta Theatre, from left, Friends of The Oneonta Theatre board members Patrice Macaluso and Carol Halter stand with Sen. James Seward, R-Milford, and building owner Thomas Cormier during a media conference. (Star photo by Denise Richardson) 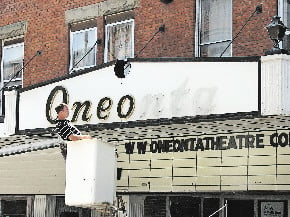 Andrew Coyle of New Berlin assesses the letters he installed on the Oneonta Theatre marquee on Chestnut Street on Wednesday. (Star photo by Denise Richardson)

On Wednesday at the Oneonta Theatre, from left, Friends of The Oneonta Theatre board members Patrice Macaluso and Carol Halter stand with Sen. James Seward, R-Milford, and building owner Thomas Cormier during a media conference. (Star photo by Denise Richardson)

Andrew Coyle of New Berlin assesses the letters he installed on the Oneonta Theatre marquee on Chestnut Street on Wednesday. (Star photo by Denise Richardson)

ONEONTA _ FOTOT has put the ``o'' back into the Oneonta Theatre.

Friends of the Oneonta Theatre and supporters said Wednesday that the stage at the 47 Chestnut St. theater has been cleared, water leaks in the roof are fixed and bats have been evicted. Plans are being made to show films, present shows and concerts and provide performance space for local groups and artists.

Plans and state funding were announced at a media conference among seats inside the theater Wednesday. FOTOT supporters then took newly made letters outside for the marquee _ where the second ``o'' in Oneonta Theatre had long been missing _ and the sign was made complete.

``It's going to be an art house,'' FOTOT board president Patrice Macaluso said.

The theater has 675 seats, plus an enclosed balcony, an orchestra pit and a 60-foot fly space. Since it was built in 1897, it has hosted vaudeville acts, movies and other performances. The property is listed on state and national registers of historic places.

Macaluso said FOTOT has an agreement with Thomas Cormier, the building's owner, to rent the theater. Lease terms still are being worked out, she said, and goals include keeping overhead low so the theater can be financially accessible to community groups.

State Sen. James Seward, R-Milford, said he designated $10,000 from the 2009-10 state budget as a member item for FOTOT. The grant will help in general operating expenses for the theater, he said.

The Oneonta Theatre is an important part of Oneonta's history, said Seward, who shared childhood memories of lines of patrons waiting outside the theater to see Disney movies. The theater should be part of Oneonta's future and development as a thriving arts center, he said.

``We announce the rebirth of this Oneonta landmark,'' Seward said Wednesday. ``This is a big step forward.''

Macaluso said FOTOT will be operating the theater, including making some improvements, paying rent and utilities and organizing performances. Turning on heat and arranging for insurance are among significant startup costs, she said, and the Senate grant will help ``fast-track our efforts.'' FOTOT will generate revenue through concession operations.

``The arts community is vibrant but not rich,'' Macaluso said.

For many years, the theater screened first-run movies, was the stage for local Orpheus Theatre shows and more recently presented musicians and a film series.

``I'm very excited that live theater and movies will be back in this theater,'' said Janet Lampo, a dancer and choreographer active in local productions.

The fate of the building and use of the theater became an issue this year as former owner Terry Mattison searched for a buyer of the property, which includes residential and commercial rental units. Cormier, who bought the building in June, said Wednesday that the rental spaces are leased.

Cormier said work inside the theater included removing a 3,000-pound wall on the stage, where a film screen now can be raised and lowered within minutes. Pigeons and other animals on the premises were ``evicted,'' he said, and humidifiers and other measures have been used to improve air quality.

FOTOT, a nonprofit organization, started meeting in February 2008, and had a business plan but not the funds to buy the building.

``As in any theater, there is a lot of backstage work,'' said Macaluso, chairwoman of the theater department at the State University College at Oneonta. Now the group will refocus its plan to concentrate on management, she said, and will build on the community's support.

About a dozen supporters were at the conference inside the theater Wednesday morning. When Macaluso said the theater will show movies ``that must be seen on a big screen,'' the response included ``Ben Hur'' and "Lawrence of Arabia.''

Philip Colone, a former owner of the building, attended the conference about the restoration project.

``It's what I've been hoping for ever since I got it on the historic register,'' Colone said. ``It's one of the best things that can happen for the city of Oneonta.''

ONEONTA - Our family lost a loved woman on Jan. 11, 2021, when Phyllis Sangetti passed away in her family home with her two daughters and son-in-law by her side. Philomena Castellano was born on April 18, 1919, to Angelo and Angelina Castellano in Brooklyn, where she was one of 10 children. …