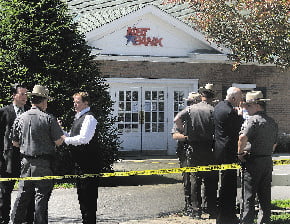 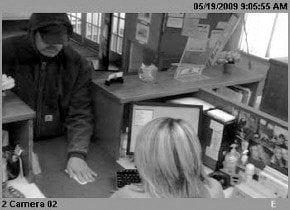 At the NBT Bank in Edmeston on Tuesday, a suspect is caught on surveillance footage robbing the bank. 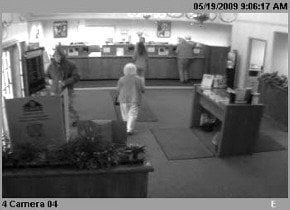 At the NBT Bank in Edmeston on Tuesday, a surveillance photo shows the robbery suspect at left.

At the NBT Bank in Edmeston on Tuesday, a suspect is caught on surveillance footage robbing the bank.

At the NBT Bank in Edmeston on Tuesday, a surveillance photo shows the robbery suspect at left.

EDMESTON _ The man whom police seek in the Tuesday morning robbery of the NBT Bank in Edmeston was seen by passers-by and photographed by surveillance cameras.

The bank on West Street was robbed at about 9:05 a.m. A tall, white, burly man, who appeared to be in his mid-30s, committed the robbery by passing a note to bank employees, said state police Lt. William McEvoy.

McEvoy and Otsego County Sheriff Richard Devlin declined to say how much money was stolen.

The suspect was seen lingering outside the bank before the robbery. McEvoy estimated the man stood about 6 feet 3 inches tall and weighed about 240 pounds.

``He was wearing a Carhart jacket with an attached hood, jeans and a dark baseball cap,'' McEvoy said.

Underneath his coat, the suspect wore a hooded sweatshirt.

The suspect, who has a mustache and black hair, was last seen walking to the east on state Route 80, said McEvoy.

The bank's security cameras did take photographs of the man's face, the lieutenant said.

Before the robbery, Richard Clark, Christopher Clark and Jamie Bowers were driving near the bank, Richard Clark said Tuesday morning.

``Around 9, I was going into the store to get a pack of cigarettes," he said, "and when I came back out, he was standing by the house that's right next to the bank."

Bowers said, ``He had his hood up, and I noticed that, because it was cool but not that cold.''

Christopher Clark said the suspect was wearing what appeared to be "prescription sunglasses.''

Richard Clark said he got a good look at the suspect and might be able to identify him.

McEvoy and Otsego County Sheriff Richard Devlin declined to say how much money was stolen.

Florence Doller, director of marketing for Norwich-based NBT, said the bank was deferring all questions about the incident to law enforcement.

Anyone with information is asked to call the state police at Sidney at 561-7400.

NBT Bancorp Inc., the parent company of NBT Bank, said in a media release Tuesday that it is offering a reward of up to $10,000 for original information leading to the apprehension, arrest and conviction of any individual or individuals responsible. The number for information listed by NBT is 226-0509, and information will be kept confidential.

There have been several bank robberies this decade in the four-county area. On May 25, 2006, a teenager robbed the Bank of Richmondville. In 2004, the Franklin branch of the National Bank of Delaware County was robbed by three men; information provided by The Daily Star helped identify the suspects in that case. In January 2002, the Charter One Bank in Worcester was robbed, while later that year, a South Cairo man was charged in a spree of robberies that included the Southside Mall branch of Central National Bank.