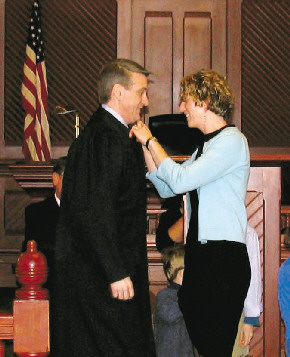 Katie Lambert helps her husband, John, after he put on a robe for his first day as an Otsego County judge after taking the oath of office in the courthouse in Cooperstown on Thursday. (Star photo by Denise Richardson) 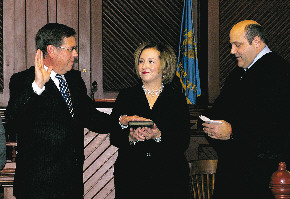 Katie Lambert helps her husband, John, after he put on a robe for his first day as an Otsego County judge after taking the oath of office in the courthouse in Cooperstown on Thursday. (Star photo by Denise Richardson)

COOPERSTOWN _ State Sen. James Seward said Thursday he was ``energized and excited'' about serving the district for a 12th term, despite the state's financial challenges.

And John Lambert, of Cooperstown, donned a robe to appear as an Otsego County judge for the first time Thursday after taking an oath of office.

Assemblyman Pete Lopez, R-Schoharie, who was introduced at Thursday's event, will be sworn in during a ceremony in the Schoharie County Courthouse at 6 tonight.

Seward, 57, said his campaign for re-election connected him with residents who want to make the area a better place in which to live.

``No doubt the challenges we face in 2009 are truly daunting,'' Seward said. ``Families and businesses are tightening their belts, but so should state government.''

The state's prosperity isn't in Albany but is in towns, including municipalities within the 51st District, he said. Government must be more efficient, with downsizing addressed, Seward said, and New York must be more attractive to business. The state's projected deficit, property tax relief and the governor's proposals to impose taxes and fees are hurdles that must be faced head-on, he said.

``I can't think of a country or state that has taxed its way to prosperity,'' Seward said. ``Economic development has got to be job one. ... We must rev up our economy.''

In the November election for Otsego County judge, Lambert, a Republican, won 13,179 votes and defeated Jhilmil Ghaleb, who had 10,480, according to the county Board of Elections.

Ghaleb, of Richfield Springs, an independent who ran on the Democratic line, had been appointed an interim judge for the county last spring by Gov. David Paterson to succeed Michael Coccoma, who won election as a state Supreme Court justice in 2007.

On Thursday, Coccoma administered the oath of office to Lambert, 39, who repeated his thanks to supporters.

``Now it's my turn,'' Lambert said, ``to serve the residents of Otsego County.''