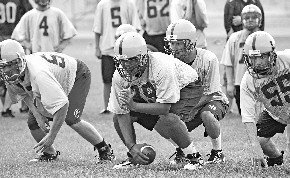 Oneonta High center Jesse Wolf-Gould gets ready to snap the ball to Dan Broe during an August practice at Oneonta High. The relatively new offensive line should make or break Oneonta this season. 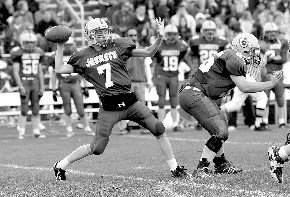 Oneonta High center Jesse Wolf-Gould gets ready to snap the ball to Dan Broe during an August practice at Oneonta High. The relatively new offensive line should make or break Oneonta this season.

It's time to see where the next generation of football players can take Oneonta High.

Pidgeon, a two-way starter who served as Oneonta's go-to running back, rushed for 936 yards and 12 touchdowns on 161 carries in 2008. Now playing at the University of Rochester, Pidgeon also formed a hard-hitting tandem with Wright at linebacker last season and led OHS with 115 tackles.

The big names may be history, but fourth-year OHS coach Adam Hoover said this year's squad might be more well-rounded than last year's team. That's because the majority of this group has been in his system from the start.

"It's rare to get a guy with the size, speed and athleticism with what Brendan brought to the table last year," Hoover said. "(The other backs) don't have all the parts he had, but put them together and they stack up pretty well."

The line is crucial here, though, because those backs will need enough time to get things going on offense. The same holds true for senior quarterback Dan Broe (5-foot-11, 151 pounds), who completed 30 of 86 passes for 508 yards and three touchdowns last year.

Broe, who was intercepted nine times in 2008, will have his top target back this season. Senior Kasey Hogan (6-4, 163) caught six passes for 167 yards last year, but he may have more chances this time around as Hoover said the Jackets plan to go to the air a little more.

"We think (Broe) can add a little to our offense, not only with his arm but with his ability to run," Hoover said. "We think we can get some guys the ball out in space. We think we can cause some problems for teams.

"We want to throw more," he continued. "We have three guys, who if we can get the ball to them, they can go. If we get Broe some time, I think we can throw it around a little bit. ... Ideally, if we're able to do it, I could see us throwing 15-20 times a game. That's pending we can have the protection."

Broe threw 20 times Friday night but completed six for 95 yards in a 28-0 loss to visiting Maine-Endwell that opened the Section Four Football Conference season for both teams. The offensive line had an up-and-down night as Broe had lots of time or hardly any at all to throw.

"They did a good job pressuring us, but we also made some mental mistakes on the protection where we were sliding and one guy forgot," Hoover said. "He noticed it right away, but by the time you take your step, it's too late. We also had some passes I think we'll normally catch."

Oneonta has some time to get ready for its Division III schedule, which features Chenango Valley, Norwich, Susquehanna Valley and Windsor.

"It gives us confidence, but at the same time, we have to know we have to work hard," Hoover hard. "Those wins didn't come easy and we have to be prepared to work to get those types of wins. That showed us we can compete with anybody out there, which is a good thing.

"The step we have to take is we have to play the full 48 minutes," he said. "Last year we played well for a half or three quarters, and once for even 46 minutes. We have to play all of them. ... We've been talking about finishing games. If we do that, it's not a stretch to see us in the playoffs. If we don't do that, we could have not-so-good of a year."

Division play begins in Week Four for the Jackets, which gives their offensive line time to mature. Senior David Schulte (6-2, 189), a Daily Star second-teamer last year, anchors the offensive line at right guard. Jesse Wolf-Gould (6-5, 275), who started at tackle last year, takes over at center and senior Pat Jeffries (5-10, 164) will be at left guard. Senior Buddy Bemis (6-2, 232) and senior Derek Wright (6-1, 191) are battling for the left-tackle spot, but senior Kenny Smith (5-10, 241) seems to have right tackle all to himself.

Junior Michael Gilmore (6-4, 194), who caught three passes for 71 yards last season, also is back and will join Hogan as a tight end. Hoover said sophomore Anthony Delgado (6-0, 175) also will see time as a tight end.

"They can catch and if they can get in space, they can run pretty well," Hoover said.

Wooden and Delgado will take over for Pidgeon and Wright at inside linebacker, where junior Dan Hodne (6-0, 206) will be in the mix.

"We don't have that leadership at linebacker," Hoover said. "But we have guys who are confident. ... They are a little tentative when it comes to making defensive calls. That will come with experience. They'll gain the confidence."

Schulte, Borggreen and Jeffries will be at either end. Hoover said he's hoping to rotate the three in the two defensive end spots to keep them fresh.

Oneonta's outside linebackers will be Gilmore and Hunter. DiMartin and Pondolfino will play cornerback, with Clemons also seeing time. Hogan is at safety.

"Defensively, we have experience all around except the two middle linebackers," Hoover said. "If those guys play the way they can and take care of their responsibilities, they'll do a nice job. There will probably be some growing pains, but you'll have that."

COOPERSTOWN - Gretchen Morrison, a teacher and lifelong resident of the Cooperstown area, died unexpectedly June 11, 2021, at the age of 42. Gretchen is survived by her loving mother and stepdad, Sandra and William Stockdale; siblings and their spouses, Gregory and Lisa Marie Morrison, Glend…

COOPERSTOWN - On Wednesday, June 15, 2021, our mom, Sandra Lee Chase, went to sleep and the Lord reunited her with our dad. She was born on Aug. 27, 1945, to Robert and Ruby Renwick, who have both predeceased her. She is survived by her three sisters, Gloria Wayman, Roberta (Rick) Vesely and…