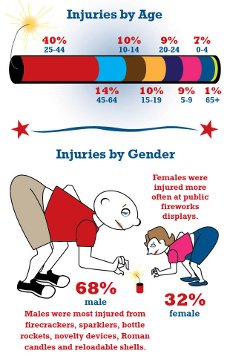 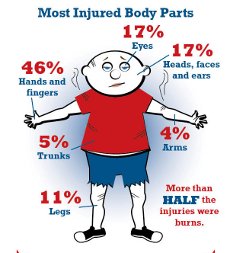 Everybody knows fireworks are dangerous but every year, thousands of injured consumers wind up in hospital emergency rooms with injuries that range from minor to fatal.

The Consumer Product Safety Commission (CPSC) reports that 9,600 people were injured and at least four were killed by fireworks last year.

More than half of these injuries were the result of unexpected ignition of the device or consumers not using fireworks as intended. Fireworks injuries most often resulted in burns to the hands and head, including the eyes, face, and ears. Sparklers, firecrackers, and aerial devices were associated with the most incidents.

"For thousands of consumers, last year's 4th of July celebration ended with a visit to the emergency room," said CPSC Chairman Inez Tenenbaum. "CPSC wants you to understand the risks with legal and illegal fireworks, in order to prevent an injury, or worse, during this holiday."

Reports of faster-than-expected explosions and unpredictable flight paths of aerial devices have resulted in tragic consequences for some consumers.

Consumers who decide to purchase legal fireworks are urged to take these safety steps: