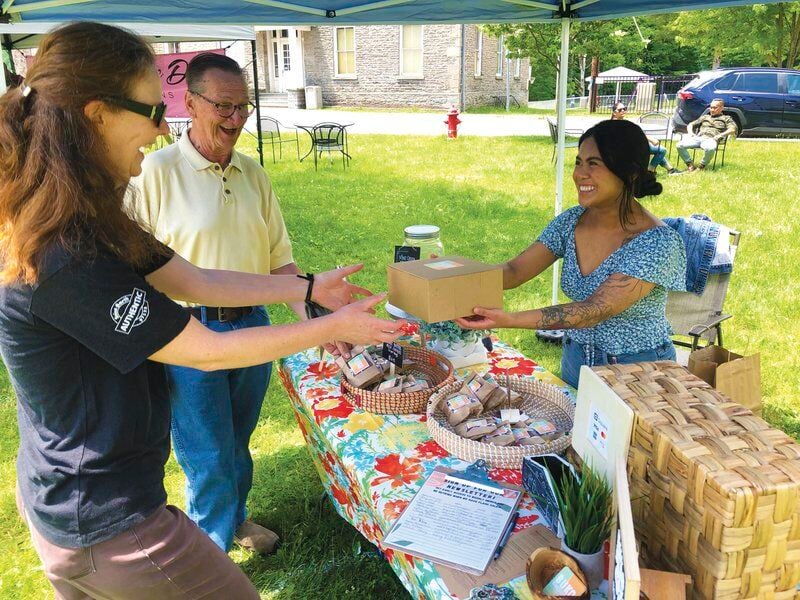 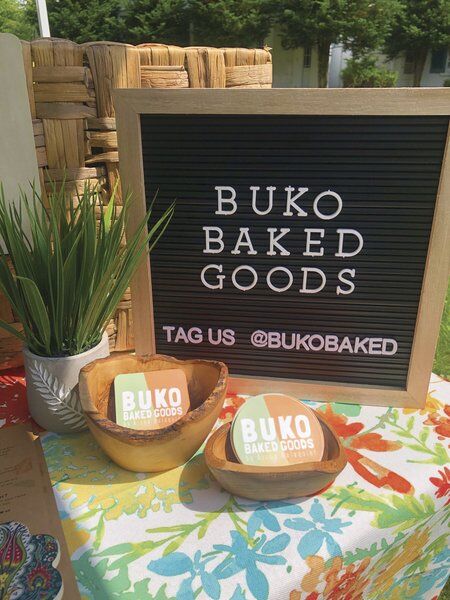 ContributedA sign for Buko Baked Goods is shown in this undated photo.

ContributedA sign for Buko Baked Goods is shown in this undated photo.

Franklin resident Aisha Balaquiot is baking outside the box, even while filling it.

The 27-year-old Staten Island native launched Buko Baked Goods earlier this month, offering creative, from-scratch treats alongside baked classics in a weekly box. The boxes, along with a la carte treats, are available from 10 a.m. to 2 p.m. at the Franklin Farmers’ Market at 25 Main St.

Balaquiot said her passion for baking and cultural exploration span a lifetime.

“I went to culinary school, but before that I was already interested in baking and cooking,” she said. “My mom had a small catering business … and I just kind of realized I really wanted to do that as well. I was self-taught and then realized, ‘this is something I want to do full time,’ and so I went to the Institute of Culinary Education in New York City and I studied for pastry and culinary management.”

Balaquiot said, since moving upstate, she developed Buko to satisfy a niche.

“I did my externship at Gramercy Tavern in Union Square and I got hired, so I worked there for a while before coming out to Franklin,” she said. “I just kind of missed the hustle of fine-dining service and I noticed there wasn’t really that many full-on bakeries around here. Walking around and meeting people around the neighborhood, they would say the same thing. It just sparked with me giving whatever I was working on to my neighbors, then I started to think, ‘if they’re interested in this, and the more people I talk to are interested, then why not turn it into something new people could experience?’

“(My family) loves getting together on the weekends to catch up while we enjoy a meal, which really is a shared and loved experience,” Balaquiot continued. “My hope is that people will bring a BukoBox to their next gathering and share it among friends and family.”

Though Buko is new, Balaquiot said, she’s long conceptualized such a business.

“I’ve been playing with this idea for years,” she said. “I was cleaning out my closet in my parents’ house and, in my old bedroom, I found a menu for this that I had written like 10 years ago. So, it’s been in the works for a long time.”

The weekly boxes, Balaquiot said, blend her training and culture with popular palettes. The business, she noted, honors her Filipino heritage, as “boku” means coconut, an ingredient used in many Filipino desserts.

“The desserts I feature in my boxes are a reflection of my roots, from the richness of Filipino culture and all of my experiences that have led me to where I am now,” she said. “Being able to curate a BukoBox each week allows me to tell a little bit of my story as a Filipina American woman, and I think that is important for me to share.

“I do a range of pastries — French pastries and things that are more relatable and that people have grown up with, (such as) cookies, cakes and brownies — but also breads and a variety of things,” Balaquiot continued. “I post the menu on my Facebook and Instagram and people can order as they want to. I’m finding that people do love the very American classic things — I did a pecan bar, which was super easy and quick for me, but people really liked — but people are also really gravitating toward things that aren’t super traditional. I did a Filipino-inspired dessert with calamansi, which is a citrus fruit that’s like a cross between an orange and a lime, and people seem to be liking that, which is exciting for me, creatively. I want to be doing things that are out of the ordinary; I don’t want to be doing chocolate chip cookies, because you can get those anywhere.”

Balaquiot said that positive feedback is reflected in her customer demographics.

“It seems like there’s a response in Franklin, but also in neighboring towns like Oneonta, Delhi and Walton … and my family from Staten Island is coming out here and they’re interested,” she said. “It’s really great that a lot of people have come up and said, ‘I saw your Instagram post and I just had to come out here.’ Their excitement gets me very excited.”

Balaquiot said, as Buko grows, she hopes to cook up more connections in her adopted community and beyond.

“I’d love to be able to ship things out and I do plan to head in that direction,” she said. “My short-term goal is to do some collaborations with some local business; I think that would be really fun. There are some Airbnbs around the area and I’ve always thought about how great it would be to be able to provide (Airbnb) guests with fresh pastries, so I’m reaching out to rental services, local vintage shops and places doing things in the community that I feel I want to be a part of too.”

Customers have until 8 p.m. Tuesday to order a box for the Sunday farmers’ market, Balaquiot said, with each week’s menu posted that Monday to social media. There is also a Buko newsletter, giving subscribers early access and notice of flash sales.

FRANKLIN - John O. Thompson, 91, of Franklin, died on Thursday, July 21, 2021, at A.O. Fox Hospital in Oneonta. He was born on March 4, 1930 in Passaic, New Jersey, the son of John W. O. and Sarah (Majury) Thompson. John was employed for many years at SUNY Oneonta, retiring as associate regi…