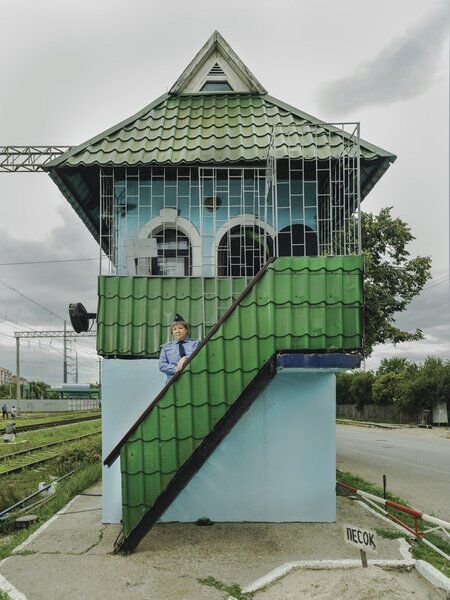 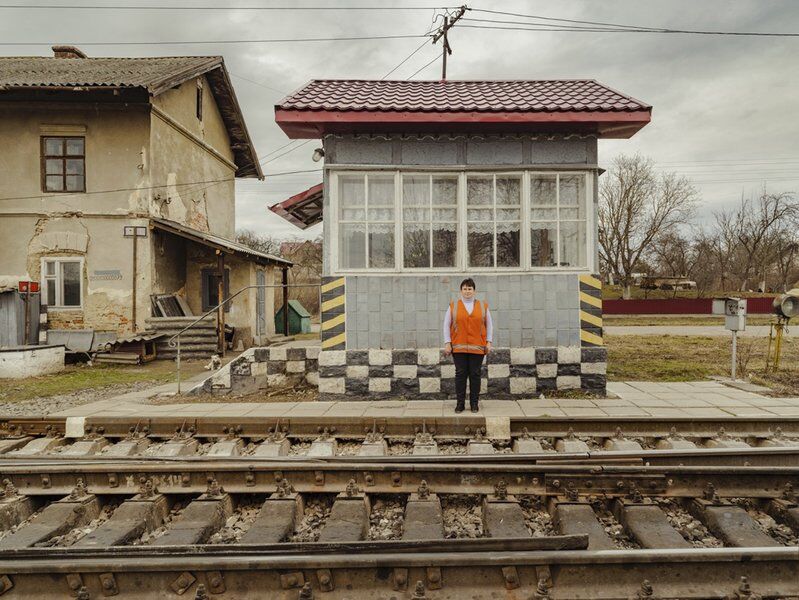 The body of work features Ukrainian rural and suburban landscapes where the exteriors of railroad houses play a prominent role. “Sasha’s photographs capture a quiet moment in a country often heavily affected by unrest” Roxbury Arts Group Grants & Community Coordinator Samantha Nick said in a media release. “We invited our community to explore how beauty and tradition can bring peace and in unexpected places.”

Maslov’s work explores “how the juxtaposition of a country and world in turmoil and the steadfast tradition of women holding yellow flags, signaling that all is clear on the tracks ahead,” the release said.

“In the storm, it’s often hard to see the lighthouse. Ukrainian Railroad Ladies are that lighthouse. They are a symbol of certain things in this country that don’t change, standing firm in the present as a defiant nod to the past. Unfazed by the passing of trains and time, they are here to stay,” Maslov said in the release.

He was born in Kharkiv, an industrial town in the east of Ukraine. After finishing his education he traveled for some time and settled in New York City at 24. His series “Veterans: Faces of the World War II,” exploring the lives of the people who participated the Second World War across the globe, has won multiple awards and prizes including 2017 PDN Photo Annual and became a finalist in Magnum Photography Awards. A book with the same title was published in 2017 by Princeton Architectural Press. He lives in Brooklyn where he has a portrait studio, has a home in Roxbury, and spends a lot of time on the road on assignments and developing his own projects, according to the release.

The exhibit will be open through May 8 and an artist talk will take place at 2 p.m. April 24 on Zoom. Email Nick at community@roxburyartsgroup.org for the link. Masks and social distancing will be required for in-person events. For more information on the exhibit or the Roxbury Arts Group, visit www.roxburyartsgroup.org or call 607-325-7908.