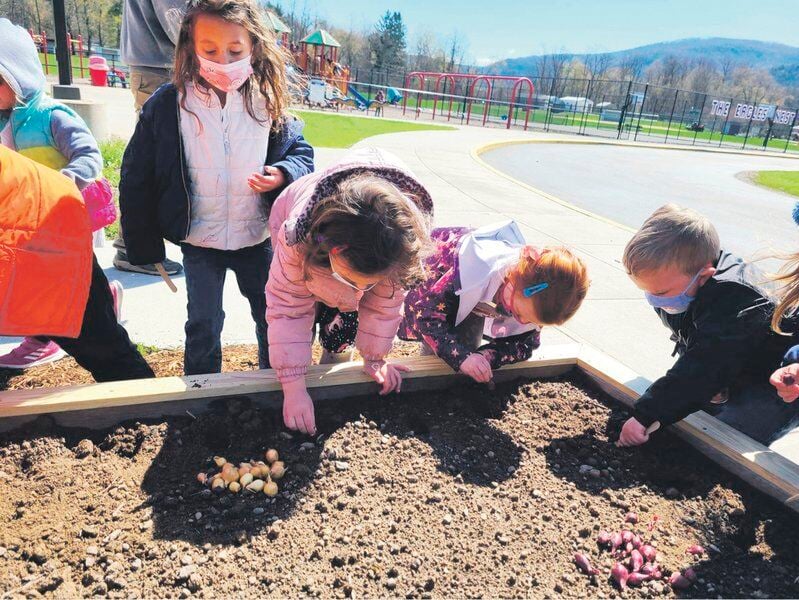 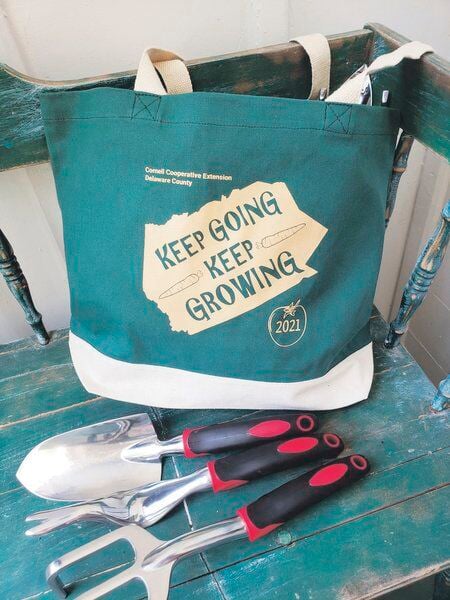 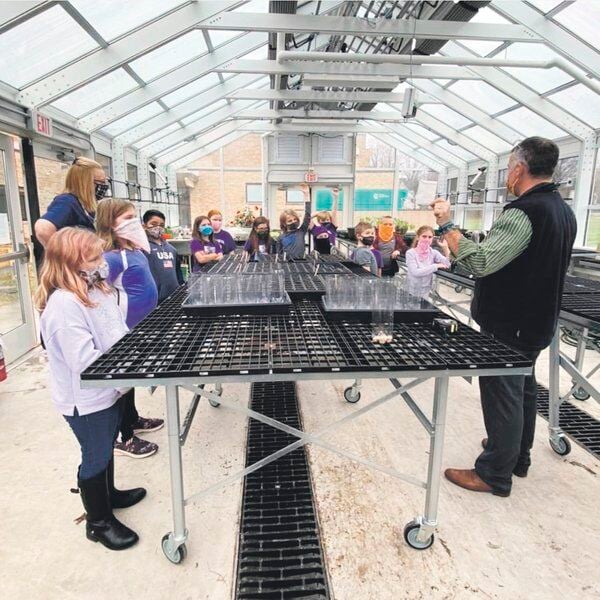 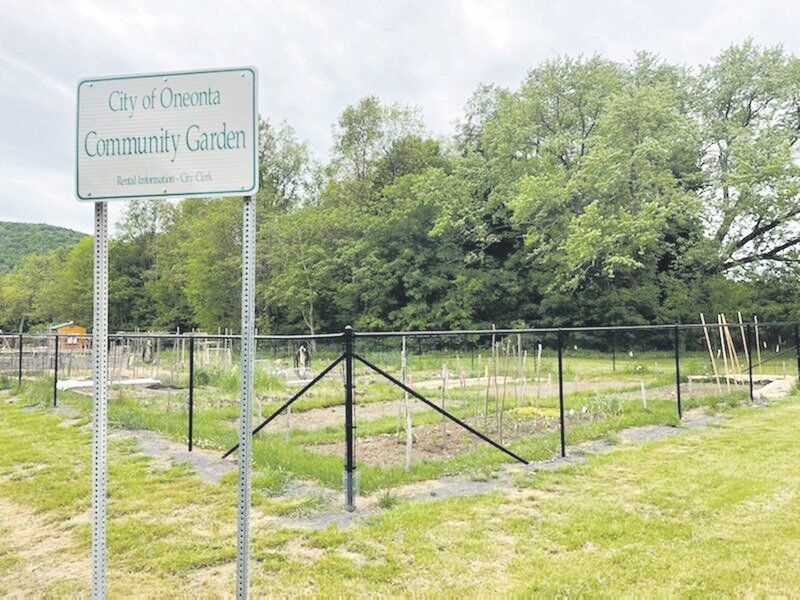 Historically, community gardens are nothing new but, thanks to localized funding and increased interest throughout the COVID-19 pandemic, the concept is blossoming.

According to the United States Botanic Garden, usbg.gov, American community gardening took root in the late 1880s, as part of the “potato patch movement,” wherein cities offered plots of land to low-income residents. That initiative, the site notes, was followed quickly by the Liberty gardens of the early 1900s and World War I, then “relief gardens” through the Great Depression and the wartime Victory gardens of the 1940s, which the site credits with generating 44% of the nation’s fresh food at the time.

Carla Crim, a horticulturist with Cornell Cooperative Extension of Delaware County, said interest in community gardens surged during the pandemic and continues to thrive. Thanks to grant funding from Care Compass Network, she said, CCE provided gardening education to 150 virtual learners and built community gardens in Downsville, Stamford and Walton through its “Seed to Supper” program. Six sites have been added this year, Crim said, in Andes, Arkville, Delhi, Deposit, Hancock and Sidney. And Birdsong Community Garden at 38480 State Route 10 in Delhi, is in its fourth season, she said.

“It’s amazing, and I do think the pandemic has a lot to do with it,” Crim said. “There are typically a lot of barriers to community gardening in a rural setting; in the past, it’s been transportation and time but, with the pandemic, obviously the time thing was overcome, so it’s been neat to see some community gardens that had gone by the wayside all of a sudden have interest again. (Birdsong) in Delhi was at full capacity this year, after years of not being full.”

Celia Reed, an Oneonta resident and member of the steering committee for the Oneonta Community Garden since 2015, said she, too, has seen participation peak, with 2020 marking the garden’s biggest season. The garden, she said, began in Wilcox Park in 2007 and offers 10-foot by 22-foot boxes for $25 per season or four-foot by 10-foot boxes for $15. Plots are assigned to city residents via a rolling signup process, Reed said, with priority given to returning gardeners.

“We’re full and it went quickly,” Reed said, noting the garden has about 30 plots. “We had about half of last year’s gardeners come back and we have a number of new gardeners. I think last year was an easy way for people to be out. The city has been really good about maintaining what’s there; there are other opportunities — the town has a community garden and there’s a community garden up behind the hospital — so I think there’s other interest and other opportunities, but, this year, we’re holding steady.”

“That (interest) is probably good for everybody,” Ryan Vogler, director of facilities with Downsville Central School and coordinator of the district’s gardening program, said. “I do think a lot of it was pandemic stuff and people had more time last summer and they got the itch to produce their own food. Hopefully, that continues.”

Vogler said he worked with Crim and Seed to Supper last April, updating the district’s three “very small raised beds (used by) pre-K and kindergarten” to a “900-square-foot greenhouse and raised beds between the greenhouse and school.” Though on school grounds, Vogler said, the garden will be open to community members and parents of students during the growing season. Downsville is a pre-K through 12 district.

Community gardening, growers said, is fruitful for folks of all ages and demographics.

“It’s for everybody, which is what’s great about it,” Crim said. “In our community garden, the time of day we work really determines who will be working; in the morning sessions, you might get retired folks but, in the evening, you’re more likely to get families and young working people.

“Originally, Birdsong was built with the intention of being for low-resource folks, but we just started letting everyone come,” she continued. “Then, all of a sudden, there was no stigma attached and it became accessible and fun. Seed to Supper went even farther, because it brought new friends and neighbors. Also, at least in Delaware County, we’ve been getting a huge mix of people, including folks moving in from the city that have never had an opportunity to garden before, so community gardening is very appealing to them.”

Reed, too, said participation is “all over the map.”

“That is one of the wonderful things about it,” she said. “We have people who are there because their kids are interested and their kids are in the garden with them, we have retirees and we have families with different cultural backgrounds.”

According to a November 2020 Care Compass Network release, “about 12% of residents in Delaware County are considered food insecure, which the USDA defines as ‘a lack of access, at times, to enough food for an active, healthy life for all household members and limited or uncertain availability of nutritionally adequate foods.’

“The rural nature of Delaware County makes access to nutritious food particularly challenging, due to a lack of public transportation and the distance to fresh food outlets,” the release continues. “Studies have shown that gardening greatly reduces food insecurity while improving overall health and wellbeing.”

“It’s not always easy to donate to a food pantry, because they have limited refrigeration and sometimes it’s not the right day for distribution,” Crim said. “But what we’ve found is, people who work in community gardens know who their friends in need are. I have one set of volunteers that gives away their entire share and another that takes flowers and food to the senior citizen apartments.”

Reed said growers at the Oneonta site share that mission.

“With as inexpensive as plots are, I’m hoping that people who are health conscious and ambitious will come and grow their own food,” she said. “We do have four boxes dedicated to supplying food to the Lord’s Table and a group of volunteers that farms those and other gardeners that don’t advertise it, but do supply to different organizations around town, (such as) Nader Towers or the women’s shelter.”

Vogler said schools, too, are working to address food insecurity with gardens and garden-related curriculum.

“We hope to provide food for the cafeteria,” he said. “There’s big farm-to-table stuff going on in New York state and there are grants related to that within the cafeteria, so that’s huge. We’ve got lettuce going right now that should be able to be served before kids leave, and hopefully we can use a lot of the food we’ve started from seed in the greenhouse and then moved to the raised beds.

“Mostly elementary classes are using (the raised beds), and each class will go out and vote on what they want to plant,” Vogler continued. “The young kids are so interested and it’s awesome to see. It’s probably 40-60 right now, with the school using 60% of it, but the kids aren’t here in the summer, so we will be donating food to the local food bank and the church in town. Hopefully there’s a high community demand, and a lot of people that will come and help us weed and keep everything clean.”

Crim said that, at Seed to Supper sites, facilitators will help with volunteer coordination, resource sharing and garden maintenance.

“What we’ve done to make it sustainable is train people from around the county as facilitators,” she said. “They went through extensive training with Cornell on how to be a leader in the garden and how to work with a diverse audience and we’re hoping to put that training to use next year. They’re garden ambassadors that people can reach out to. Our focus going forward is to use funding to train more facilitators and provide goodies for participants; people stay excited because they’re all getting a flat of plants, 15 packets of seeds, some really nice tools and a cool tote bag.”

“We were amazed at the number of community partners that stepped forward in each community,” Crim said. “There was a donor of land in Stamford, then a member of the church doing labor, then the fitness center got interested in providing grants, so in each community, we saw different neighbors step up. But what really appeals to me, as a horticulture educator, is seeing people learn as they garden. They learn how to prune and trellis tomatoes, hands-on, and that’s something they’ll have the rest of their lives and they can share as friends.”

“Even though I went for the produce,” Reed said, “what I found was, it’s just a really nice community and a nice place to learn about gardening and options and other people’s tastes and customs and everything else. People are really good about sharing tools and expertise. It’s a delightful place to share that.”