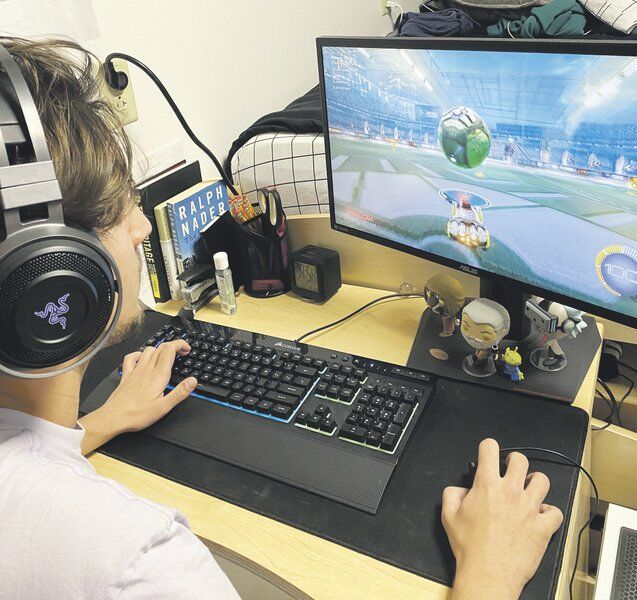 ContributedHayden Rieger, a senior at SUNY Oneonta and secretary of the college’s Esports Club, is shown gaming in his dorm room in this undated photo. 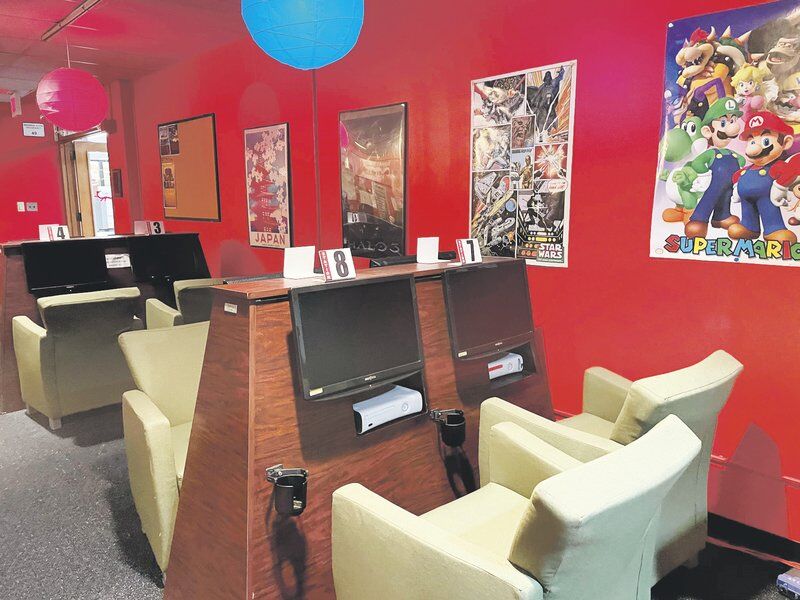 Allison CollinsGaming computers are shown in the Dragon’s Lair, a casual on-campus gaming space at SUNY Oneonta on Wednesday, Nov. 3.

ContributedHayden Rieger, a senior at SUNY Oneonta and secretary of the college’s Esports Club, is shown gaming in his dorm room in this undated photo.

Allison CollinsGaming computers are shown in the Dragon’s Lair, a casual on-campus gaming space at SUNY Oneonta on Wednesday, Nov. 3.

Things in the video gaming world, and particularly collegiate esports clubs, are leveling up.

Discoveresports.com states “esports, electronic sports, competitive gaming, professional gaming or any variation of those words is a form of competition with the medium being video games (and) individuals, commonly called cyberathletes, use computers or specific video game consoles to play.”

“In really simple terms, it’s competitive gaming,” Karen Stewart, assistant professor of media studies at SUNY Oneonta and the college’s esports team adviser, said. “It’s playing video games at a competitive level, and those competitions are often organized around teams, and the teams meet, practice, support each other, then join tournaments and play other teams.”

According to an Oct. 15 media release, interest on SUNY campuses has risen sharply.

“The fall 2021 esports season debuted with unsurpassed participation numbers across SUNY campuses,” the statement said. “In the fall 2021 semester, 2,077 students enrolled in a SUNY Esports program, compared to 636 … at the same time last year.” The release said the “number of participating campuses offering esports programs grew from 45 in 2020 to 49.” Total viewership, the release added, is “expected to reach 474 million in 2021 and 646 million by 2023, surpassing viewership for the NFL,” with esports-related revenue likely “to exceed $1 billion this year.”

Such a leap, the release said, led SUNY to partner with LeagueSpot, “an esports tournament engine that offers campus teams an opportunity to easily access competition rankings and communicate more successfully.” It is through the SUNY league, Stewart said, that the student-run Oneonta Esports Club organizes most of its tournament participation.

Though Stewart said she’s seen the trends reflected among Oneonta players, such a rise has been years in the making.

“It’s been building slowly over the last 10 years,” she said. “But really, in the last five years, it’s been gaining a foothold. The gaming industry as a whole is just huge now; it has just blown up. It has surpassed the movie industry in terms of revenue that it’s generating, so it’s that big.”

“Students are looking for this and they want to do this; they’re already playing and competing at the high school or junior high level, and looking to continue when they go to college,” she said. The release said “17 states recognize esports as a high school varsity activity.”

“We have the infrastructure now,” she said. “We have live internet and streaming platforms that you can actually hold tournaments on. So, we have students already playing and already on teams and doing this … because the platforms are available and accessible, and … they’re considering this or professional (game) development as a career choice. We’ve got professional gamers now with salaries that match top NFL players. All these things have been coalescing in the last couple of years to become this whole phenomenon.”

At the collegiate level, Stewart said, gaming is about much more than play.

“A lot of schools across the country are looking at how you can integrate esports into game education — what is gaming, what does it give us — and it helps players get a new perspective on how to design in the process,” she said.

And, different from traditional sports, sources said, esports thrived through, and because of, the COVID-19 pandemic.

“Gaming during COVID has exploded,” Stewart said. “People are home … playing games, then playing more games, and it’s one of the ways people can be social, but social distance. A lot of collaborative and tournament games have been ridiculously popular or grown in popularity through COVID. Kids interested in game design are playing more, and there are a lot of workshops and trainings on how to build your own games and people are just teaching themselves and learning more skills, so COVID has actually contributed very positively to all things gaming.”

“I’ve seen it become a lot more prominent and more popular,” he said. “At the club expo that we have on campus every year, all the clubs gather … and, out of the whole expo, the Esports Club stand was easily the most popular. I was surprised at how popular it was … and I remember, we had signup sheets for people, and we’d printed out two, but we ended up needing like four.

“This year, we tried really hard to get a place to meet in person on campus, but it’s still kind of sketchy to get a place large enough,” Rieger continued. “We aren’t even meeting on campus, we’re still meeting exclusively online, so I would say esports has been able to thrive through the pandemic and the community is still very strong.”

“I joined SUCO’s Esports Club last year, in the fall when we all got sent home for COVID,” Maddie Breen, a 19-year-old sophomore from Saratoga Springs and club treasurer, said. “I didn’t actually learn about the club until the pandemic. It was so amazing for esports. I don’t want to give any props to COVID, because it ruined so many things, but it has helped (gaming). We all had to switch to online anyway … and we couldn’t leave the house, so a lot of people took to video games. The Esports Club had a huge boom; we were still able to talk to each other over voice channels online, so I do think it’s helped a lot with representation and activity.

“Even this year, there’s been a lot more interest in the club,” Breen continued. “A lot of people didn’t know it was a thing, because it’s not a mainstream club, so more people have been getting to learn about it and saying, ‘This is a really cool outlet to play games and make friends.’ It’s something that will grow in popularity and, worldwide, has been growing in popularity for the last couple of years.”

“I would say there have been a few games in the last few years that have come out — Fortnite, Apex Legends — that pretty much made it really widely available and relatable … and more appealing to a wider base,” Rieger said. “When Fortnite came out, it was the biggest thing and the ultimate esport, and I think that definitely made esports a way more prominent topic. Esports in the past few years has become more acceptable; there was a stigma that it’s not a real skill, but I disagree, and I think that’s starting to go away and people are starting to realize how fun and how skilled people really are.”

“It’s a mix,” Stewart said. “There’s this perception that, it’s a video game, so it must be a boy thing or, ‘Oh, a certain type of game will only attract a certain type of person,’ but the club is made up of everyone: it’s freshmen to seniors, all different majors and different backgrounds and it’s male and female.

“It has so far to go up still,” she continued. “Schools are putting in leagues all over the country, there’s all kinds of development going on for structure and how to compete against each other and, in terms of education, there’s a lot of exploration right now as to how to integrate (gaming) into experiential or applied learning. It’s in its baby stages.”

“Speaking as a woman, women in esports hasn’t been something gaining popularity until recently,” Breen said. “Women have had to fight for a long time for equal representation in esports, and we’re still not there, but I look forward to that. Esports in general is going up, but also representation of women in esports. The gaming industry is one of the biggest misogynistic places, but … it’s changing slowly and there’s an awareness of problems.”

For many contemporary players, interest spans a lifetime.

“The amount of people (that play) … is generational now,” Stewart said. “They learned to play from their parents and sometimes even grandparents, so gaming is not just this sort of … ‘Oh, people off on the side do this.’ It’s mainstream and it’s super popular across all demographics, so there’s huge interest in it. I watch and marvel at how sophisticated it’s all become and how much passion there is.”

“I’ve been gaming a really long time,” Breen said. “I am an only child, and my parents are both video game parents, so I’ve always grown up playing the Wii and the original PlayStation and my dad got me into first-person shooter games, which play competitively, so I started out with Call of Duty and he kind of showed me all that.”

“When I got started (in the club), it was fall 2020 and I was thinking about ways to get more involved on campus,” Rieger said. “I signed up and I’ve been really involved ever since. I consider myself a big video game nerd; (I’ve played) pretty much my entire life. One of my earliest memories is my father playing PlayStation 2 and my older brother went up to the game and shut it off on him. My older brother, now 24, would always play and I’d watch him, so it’s both of our passions.

“I just love stories,” he continued. “Games like Skyrim Elder Scrolls are so good at telling stories and keeping you engaged. I would play games like that for hours and just be completely immersed in the story and the world; that’s why I keep going back. I love that feeling of being able to sit down and put life away for a while and just be immersed. It’s not all about being stimulated; it’s about learning, about life and about exploring worlds you can’t possibly go to.”