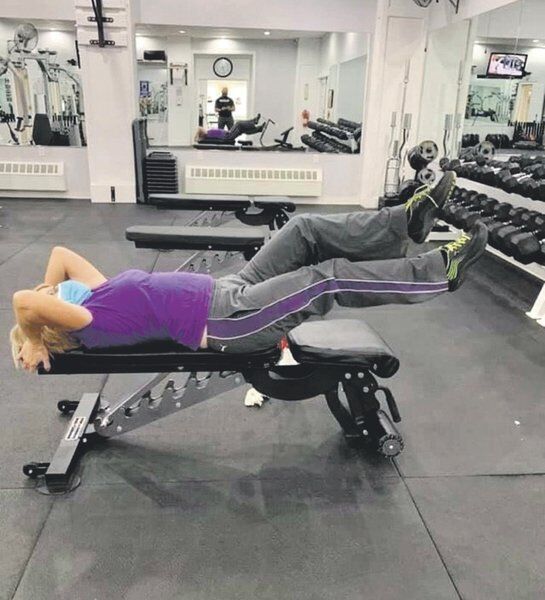 ContributedCarol Cook, a member of My Home Gym in Bainbridge, exercises while wearing a mask in late 2020. 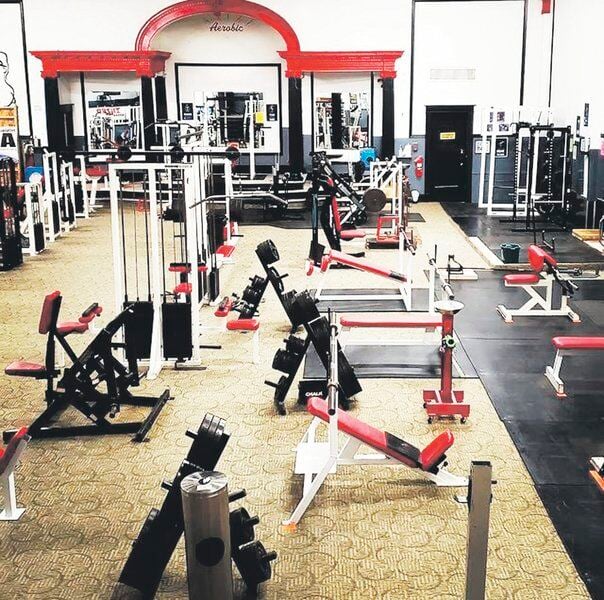 ContributedABOVE: The just-cleaned interior of Muscles in Motion at 101 Main St. in Oneonta, is shown before the gym’s early September reopening. BELOW: Collin Neer, a member at Table Rock Fitness in Oneonta, performs a preacher curl while masked in this undated photo. 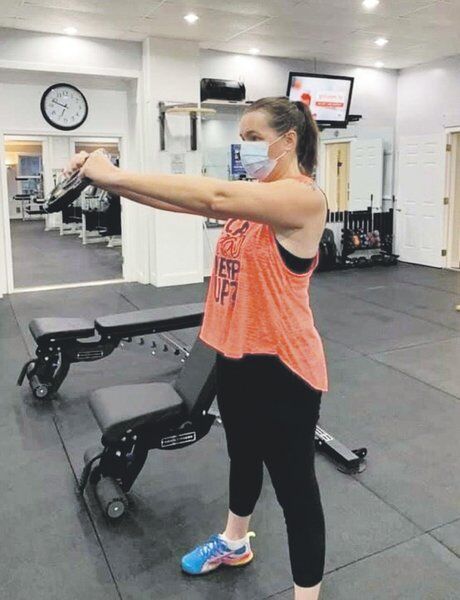 ContributedMy Home Gym member Tammy Seward wears her mask while working out at the Bainbridge facility in this undated photo. 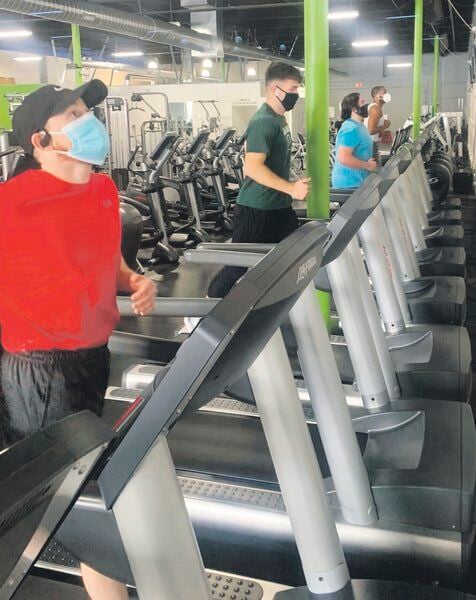 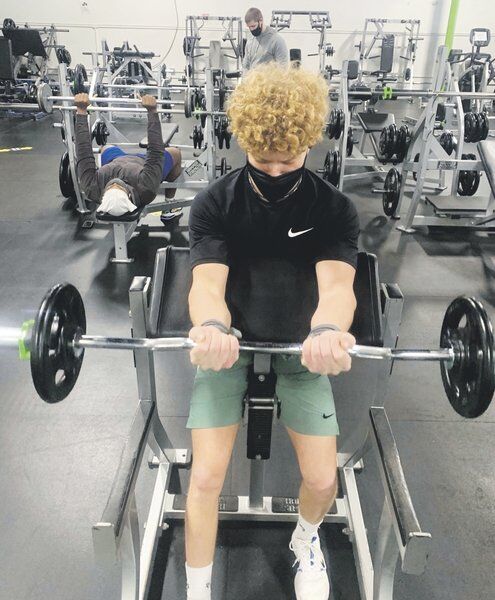 ContributedCollin Neer, a member at Table Rock Fitness in Oneonta, preforms a preacher curl while masked in this undated photo

ContributedCarol Cook, a member of My Home Gym in Bainbridge, exercises while wearing a mask in late 2020.

ContributedABOVE: The just-cleaned interior of Muscles in Motion at 101 Main St. in Oneonta, is shown before the gym’s early September reopening. BELOW: Collin Neer, a member at Table Rock Fitness in Oneonta, performs a preacher curl while masked in this undated photo.

ContributedMy Home Gym member Tammy Seward wears her mask while working out at the Bainbridge facility in this undated photo.

ContributedCollin Neer, a member at Table Rock Fitness in Oneonta, preforms a preacher curl while masked in this undated photo

Amid the pandemic caused by the spread of COVID-19, many are eager to bid 2020 goodbye and start anew in 2021. With that comes the making of New Year’s resolutions, many of which will be fitness-related, but local gym owners said they’re unsure what to expect this January.

According to a December 2019 article from the International Health, Racquet & Sportsclub Association, a nonprofit organization promoting the fitness industry, “nearly 11% of all health club members join their gyms in January” and “Google searches for health and fitness peak at the beginning of the year.”

Anna Banks, co-owner of My Home Gym with husband, Mike, said she typically sees an increase at the Bainbridge facility, which opened in January 2018. While Banks said “it’s hard to say” what this month will bring, she said she’s “definitely expecting an uptick” through early 2021.

“Usually, right around the day after Christmas and the first couple weeks leading into the New Year are definitely our busiest for membership enrollment,” Banks said.

“A lot of people have gained a lot of weight during COVID and become complacent,” Banks continued. “We’re hoping to do what we’ve done in past, but hoping to do even more, because being healthy and active is super-important in fighting COVID; making sure you have strong lungs and are not overweight are huge factors.”

Craig Meadowcroft, co-owner of Muscles in Motion at 101 Main St., Oneonta since 2018, said he, too, typically sees a membership spike each January.

“I don’t know if I can quantify it into numbers,” he said, “but we definitely get more signups and we’ll see an increase in membership after the New Year, absolutely.”

“I was surprised, in a good way, at the amount of people that did come back to the gym, given everything that’s transpired in 2020 related to COVID,” he said, noting that Table Rock Fitness was closed from March through early September. “We opened, and the influx of people that came back to the gym was far beyond my expectations. I think that people will still have, in the back of their minds as we turn to a new year, that sort of fresh-start mentality and maybe even more so, given what 2020 has brought us.”

Meadowcroft said, like Banks, he’s unsure what to expect this season.

“We got a lot of people coming in when we (re)opened in September,” he said. “A lot of people came in and said, ‘Thank God you’re here, we’re so glad the gym is open.’ So, I think we will get some people here for (New Year’s) resolutions, but I feel like, because of the pandemic, we’ve already gotten some of those people who were stuck at home and wanted to be at a gym and made that choice when we opened. I’m not sure (January) will be what we’ve seen in the past, but I think we’ll get some.”

Banks said this year’s enrollment unpredictability correlates to “inaccurate” data distributed early in the pandemic and the industry-wide impact that’s had.

“We’re seeing a lot of gift certificate sales already, but with COVID, people are still leery, unfortunately,” she said. “The information that had been put out about gyms and fitness places was that they were not safe places to go, up until recently, when Gov. Cuomo corrected that. The positive rates in gyms are 0.06%, but it takes a long time to convince people that what they’ve heard for the last nine months isn’t true.

“We closed for 170 days,” Banks said. “We were left out of Phase 4 and we were closed for another two months after that. Gyms are by far one of the most heavily hit industries, outside of entertainment, and we were the last business to be able to open in our area. Now, we’re a part of the New York Fitness Coalition; about 1,700 gyms got together when we were left out of Phase 4 to fight for our right to open.”

Meadowcroft, too, said weathering the mandated closure was “tough.”

“In March, when we closed, we had no idea what to expect,” he said. “We figured we’d be closed for a couple months then go back to normal, but that wasn’t the case; we were closed a solid six months and that hurt us.

“All through those six months, we had no idea what was coming because there was nothing in the plans about gyms or anything remotely close — health centers, spas, whatever,” Meadowcroft continued. “We couldn’t find anything that related to us, so we didn’t know what to do. We were refreshing the New York state COVID page every day, just to figure out what we could do, then in August, we started getting information and getting air-handling systems … and making changes throughout the gym (such as) making sure everyone wears a mask. People are really good about cleaning up and social distancing and being very safe. They’ve done some studies with gyms and it’s a very small percentage of cases that comes from gyms.”

Schlafer also said the initial lack of state-sanctioned information made looking ahead tricky.

“There was a stigma around gyms, and they were getting a bad rap for being a higher-risk activity,” he said. “Gyms have, I believe, the potential to be a riskier activity if there are no protocols or guidelines. A lot of things could be risky activities, but you were still allowed to do them with a mask on or while maintaining six or 12 feet; gyms were always treated as a high-risk thing, but with no other option.”

“I’m glad people took that first leap of faith and returned to the gym,” he said. “I didn’t know how people would be about getting on a treadmill or a rowing machine with a mask, and we did a lot of internal testing, but I was happy to see a lot of people return. We haven’t had a contact trace to our gym since we opened, but that’s like most gyms. Our goal is to have a safe environment for members and staff, so if that’s what it takes and it works, I’m glad.”

For those with fitness-related resolutions but reticence, local gym owners recommend reaching out.

“I think the best resource if someone is on the fence about joining a gym is to talk to us,” Schlafer said. “Give as a call and we can present some data. Now that gyms have been open, especially in New York state, there are lots of data points and a fitness coalition where we all share those data points, so we have a lot of insight into information that maybe isn’t published every day, but all gyms in the state are sharing back and forth.

“If you’re interested in a membership you can come in and pay for a day pass,” he said. “If you don’t know if you can run on a treadmill in a mask, we’ll comp that day pass amount off the membership fee. It’s a try-before-you-buy option.”

“From a straight fitness standpoint, I think no one knows where to start,” Meadowcroft said. “If they’ve never done it before, people can get intimidated if they come into a gym and see someone running on a treadmill for three hours or lifting really heavy weights, but, from my personal experience, no one is judging you and no one is looking at you and everyone is willing to help. My advice is to come in and do it anyway.”

“From a safety perspective, I would reach out to your gym to find out what their protocol is,” Banks said. “Get a tour; you’ll be able to see very quickly if it’s clean and see the members and that everyone has a mask on. All gyms should have their safety plans on-site and what they’re doing and how they’re tracking numbers. For us, every time someone comes in, we take their temp and they fill out a questionnaire. It’s something we take very seriously.

“For people that are hesitant because they’re nervous about joining a gym, bring a friend and join together,” she continued. “Having a buddy that will hold you accountable and that you can learn new things with is always fun. People that don’t go to the gym think (it’s about) going and lifting weights to get a perfect body, but going to a gym is so much more. Our members don’t come for a six-pack and a bikini body, they come to keep healthy and make sure they’re strong.” Banks said My Home Gym is kicking off an eight-week competitive weight loss program on Jan. 4.

Roger Hall, owner of Catskill Kettlebells at 2 Depot St. in Delhi, said, when it comes to making resolutions, simplicity is more important than ever.

“I’m not a big New Year’s resolution kind of person; they’re sort of made to be broken,” Hall said. “What I’ve been really trying to do … is just encourage people to have good habits. For people with weight loss goals, I’m encouraging them to get 300 minutes of exercise a week or 45 minutes a day and that can be anything — walking, snowshoeing, running, just moving your body.

“If you pick a New Year’s resolution,” Hall continued, “pick something that’s very doable and maintainable, something you can achieve success with and then build upon that success and have a plan for that. It’s really disheartening if you set a lofty, ambitious goal that will last maybe a day or not even and just go by the wayside. So, my big, unsexy and un-fun advice is to pick something very simple, super easy and have a reason for doing it, a plan to get there and then do it.”