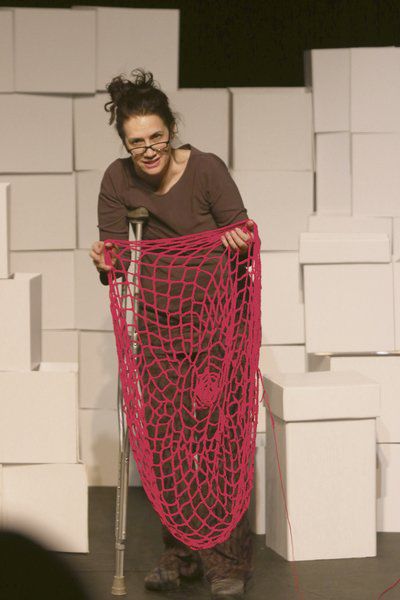 ContributedPatricia Buckley acts in one of three roles from “Evolutions.” 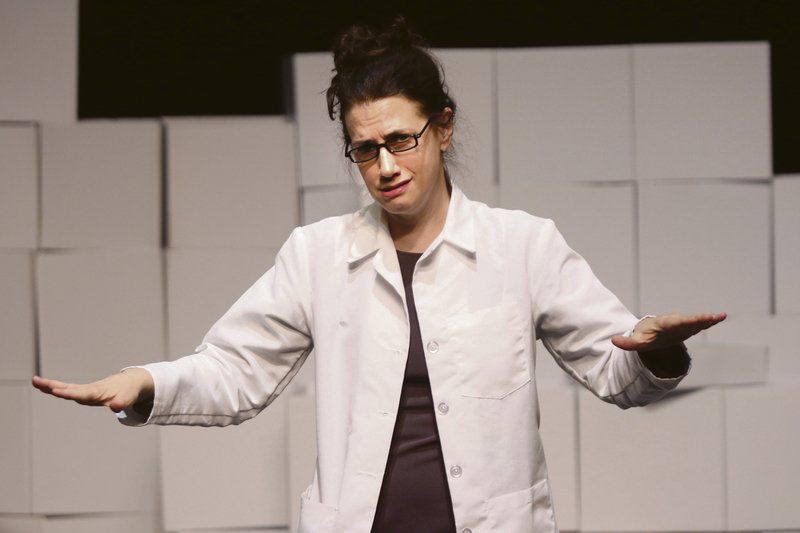 ContributedPatricia Buckley acts in one of three roles from “Evolutions.”

Over chips and guacamole at the Autumn Café, actor Patricia Buckley made an observation. “If we could all look at ourselves, we’d probably just weep,” she said. Buckley then laughed in surprise as her interviewer scrambled to write those words down.

The writer and performer of “Evolution,” a one-person play that recently concluded a three-night run at The Franklin Stage Company, was talking about life, but also about the vital role of the clown in the theater. Buckley credited the often-unsung art form of clowning as “the basis of my training,” and hailed its capacity to communicate the comic and tragic in equal measure. “Sometimes we relate to the clown, and how they’re trying to get through the day— and failing at all times,” she said. The valiant Fool’s resilience, she said, tends to come in handy for an artist committed to crafting theater that demands her own constant presence onstage.

Buckley’s play introduces its audience to two generations of women: There is the housebound and hospitalized Minnie, afflicted with an enigmatic malady; her sister Pammy, a celebrated but overwhelmed paleontologist, drawn back home by crisis; and their harried mother, left to bicker with disinterested doctors and to juggle her daughter’s endless diet of ever-more-absurd medications. Overall, Evolution achieves a kind of wild, one-woman family reunion, as all of the characters are embodied by Buckley, herself.

This same skill set served Buckley well in the FSC’s recent adaptation of Anton Chekhov’s “Three Sisters,” an interpretation called “We 3,” that distilled the play’s entire populace into the persons of its central siblings. Buckley, Kimiye Corwin, and Liz Kimball not only played Masha, Irina, and Olga Prozorov, but channeled the rest of the cast as well — a whole houseful of men and women at all stages of life. Uniformed in simple white garb and pacing a set sparsely furnished with a wooden playground swing built for three, the sisters seemed to be both the authors of their own drama and inmates of the same asylum, compulsively remembering their past lives for one another. Director Carmela Marner’s vision summoned a trio of intertwined solo shows, paving the way for Buckley’s own production to take sole possession of the stage last weekend.

“I’m not a playwright, and I don’t know how people do it,” Buckley insisted. She explained that her core creative identity as an actor was crucial in honing her work. “I’m a performer,” she said, “so the writing process was filtered through that.” “Evolution” is all about the trial and error inherent in its title, and that dynamic also defined its development — sometimes bracingly so. “It’s very humbling,” Buckley said of her direct approach to shaping each of its 21 scenes. “Because a lot of things you think are going to work don’t work.”

At the same time, Buckley’s play challenges the very notion of “error,” of imposing a rigid story structure on the changes people chart in the natural world. One of the inspirations for “Evolution” when Buckley encountered the scientific consensus that whales first emerged from water onto land, only to forsake it in favor of submersion again, becoming the marine behemoths we now know. As she processed that revelation,she said,  what struck her most was the initial disbelief she detected in herself.

“Whales did not evolve out of the ocean and then go back in,” she recalled thinking, if only out of conditioned instinct. That spurred her reappraisal of the “everyone out of the pool” model of evolutionary narrative, a one-way march of progress from water onto Terra firma that is totally linear, and firmly establishes humanity as the finish line. “Maybe things are more circular,” she suggested, a proposition that Minnie’s nameless illness and her sister’s ceaseless research probe further as the play progresses.

Buckley’s refusal to follow formula extends to her expectations of how audiences “should” receive Evolution, for she herself doesn’t harbor any. “I think that’s their business,” she concluded. “They should get what they get out of it.”

Buckley, a longtime Franklin Stage Company performer, focused on the art that the theater has brought to the local community for 20 seasons now. “I love doing theater for free,” she said. “I think it’s awesome and necessary.”

FSC’s tradition is to forego any upfront fee for its productions, but to instead have its actors greet spectators at the door as they leave. Holding felt hats, they invite audience members to donate whatever they feel to be a fair contribution.

Buckley, who resides in both Franklin and New York City, is contemplating another play of her own. “I look forward to having some quiet time to develop the next thing,” she said. In the interim, she displays the patience required of every performer who awaits the arrival of her next role. “I’m an actor,” she said, smiling, “so it comes as it comes.”