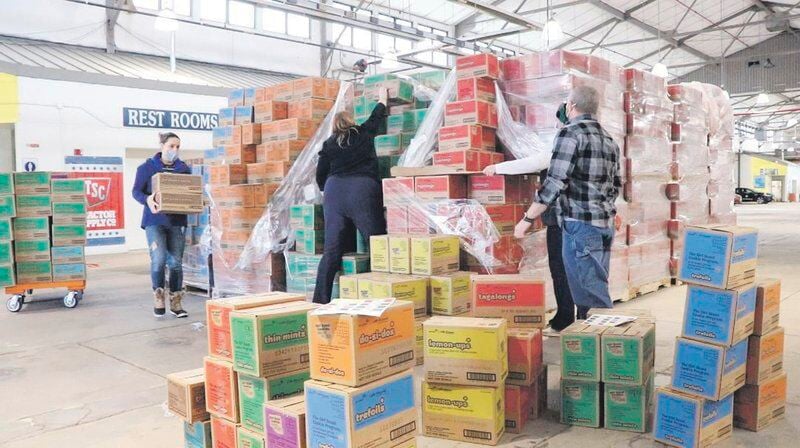 ContributedThousands of cases of Girl Scout cookies await distribution from the New York State Fairgrounds in Syracuse earlier this month. Members of the Girl Scouts of NYPENN Pathways will sell the cookies from a drive-thru booth at the site every weekend through March 28. 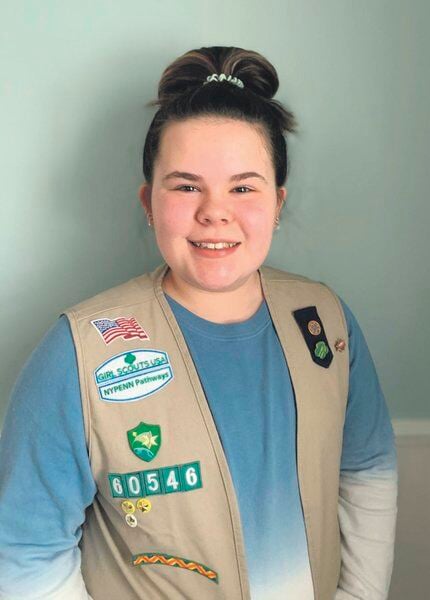 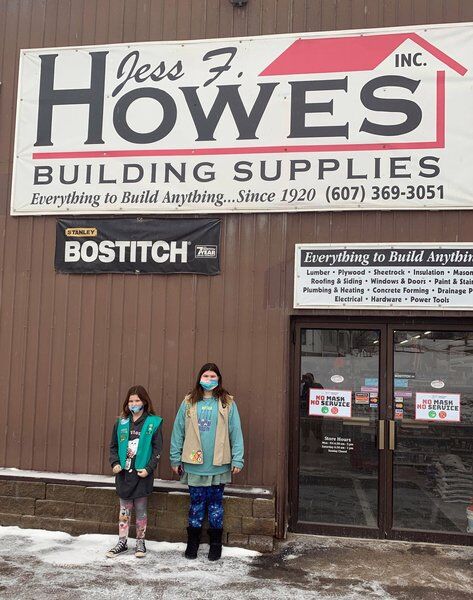 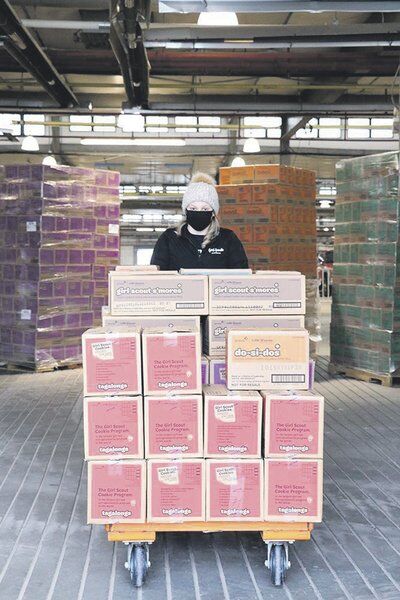 Below: An unidentified member of the Girl Scouts of NYPENN Pathways is shown selling cookies at the New York State Fairgrounds in Syracuse earlier this month.Contributed

ContributedThousands of cases of Girl Scout cookies await distribution from the New York State Fairgrounds in Syracuse earlier this month. Members of the Girl Scouts of NYPENN Pathways will sell the cookies from a drive-thru booth at the site every weekend through March 28.

Below: An unidentified member of the Girl Scouts of NYPENN Pathways is shown selling cookies at the New York State Fairgrounds in Syracuse earlier this month.Contributed

For area Girl Scouts, the COVID-19 pandemic has taken a bite out of annual cookie sales.

Jaime Alvarez, senior director of marketing and communications with Girl Scouts of NYPENN Pathways, said area troops felt the impact of the pandemic on 2020 cookie-selling. The 26-county council, she said, includes Otsego County’s 30 troops, with 205 girl members and 113 adults, and Delaware’s 33 troops, with 226 girl members and 102 adults.

“As a council, we’ve had to pivot and look at how the girls and troops can safely have a cookie season,” she said. “This is our second cookie season during the pandemic. Everything started happening in March … so, last spring, during what is usually our busiest part of the season, we had to completely shut it down because of state mandates for social distancing and quarantining.

“We got creative last season and worked with some amazing community partners to take that cookie stock and bring it into their businesses,” Alvarez continued. “Takeout restaurant locations (carried the cookies), so customers could order them with their meals and everything still went back to the girls, and we extended the (2020) cookie season to the end of May to allow our troops to get rid of stock they’d just picked up.”

Alvarez said leaders and troops had to build upon that resourcefulness as they headed into this year’s selling season, the conclusion of which was extended from March 21 to March 28.

“We’ve been able to prepare more, because we’ve been dealing with this for a year,” she said. “So, we’ve thought about ways to creatively have the cookie sale, our largest annual fundraiser, while allowing (troops) to pick and choose what they’re comfortable with.

“Some troops are doing things completely digital — (troop-specific ordering) links, hopping on virtual networking platforms like FaceTime or Zoom and having virtual cookie booths — and … some are opting to have contactless drive-thru booths,” Alvarez said. Cookie lovers can order or search for such sites by zip code with the council’s online cookie finder, she said, at gsnypenn.org/en/cookies/buy-cookies.html.

The Girl Scout Cookie Program, begun 104 years ago, also collaborated with Grubhub, Alvarez said, to provide delivery to designated areas. And, according to a Feb. 10 press release, GSNYPENN troops have partnered with the New York State Fairgrounds to “host weekend drive-thru booths on Fridays from 4 to 8 p.m. and Saturdays and Sundays from 10 a.m. to 6 p.m. … (through) Sunday, March 21.” Sales will take place outside of the Tractor Supply Co. Exhibit Center, the release said, with credit and debit card sales preferred.

“Just like everything, we’ve adapted and shifted how we developed the program to meet the challenges we’re facing, and that’s part of what Girl Scouts is,” she said. “What better way to teach them leadership skills than to try to adapt and overcome? Everything with Girl Scouts is girl-led, and girls are still running the program.”

“(Through) the Girl Scout Cookie Program … girls develop important life and leadership skills, (including) goal setting, decision-making, money management, people skills and business ethics,” the release states. “Girls are flexing their entrepreneurial and leadership skills even further as they overcome challenges to more traditional face-to-face and walk-up sales in light of the pandemic.” The annual cookie fundraiser, the release said, is “the largest girl-led entrepreneurial program in the world.”

Cindy Lehr, leader of Oneonta’s Troop 60546, echoed: “I think that coming up with creative new ways to get sales is one of the things Girl Scouts promotes — innovation, determination and still trying, despite obstacles.”

“Since I couldn’t go to my mom’s office and walk around and ask her coworkers, my mom let me make a video on her Facebook explaining that it was kind of hard to sell during the pandemic and that we have an online link where people can order … and even donate, so that really helped,” she said. “We did about three videos. A lot of people had questions on where the (donated boxes) were getting donated — first responders (and Meals on Wheels programs) — so we made a little bit of a series.”

Though Artale said she “had a goal of 275 (boxes),” her social media sales took off.

“I was really shocked with how many people ordered and how many shares I got,” she said. “Last year, I sold about 300 and this year was about 406, so it was definitely a big difference that I was not prepared for. The farthest (sale) was to California, so it’s been all over. Normally, every year, I go to school and ask teachers and at my mom’s office and (sell) about 200.”

Sidney troop leader Kimberley Siegenthaler said her daughters, Krystal, 13, and Hailey, 10, the two remaining members of Troop 30033, have relied on online sales and community partnerships. Before the pandemic, she said, Troop 30033 had six members.

“We can have our (drive-thru) cookie booths, but it’s up to the troop leaders to decide if the girls and parents are comfortable doing that and a lot of ours in Sidney are not right now, understandably,” she said. “So, a lot sold strictly to friends and family and then that’s it, they’re done.

“Last year, because we shut down mid-cookie season, they allowed community partnerships,” Siegenthaler continued. “We live in Sidney Center, so we have (cookies) at It’s My Deli and Jess F. Howes. We’re trying.”

“Some people preferred that you leave them in their office and some at their house,” she said, “so we had to find addresses and it was more driving. Normally, I’d just go to my mom’s office and do all the deliveries there.”

Siegenthaler, in her third season as a cookie coordinator, said, while her girls have risen to the challenge, they miss traditional cookie sales.

“My girls’ favorite part of cookie season was getting out there and being able to do cookie booths — setting up and selling at events,” she said. “Even though it’s cold, their favorite thing is interacting with people and they love the selling, so they’re struggling. Anytime I go to one of the community partners, I always make sure they’re with me, with their vests on, just to show it’s still their cookie sale.

“Our council organized a drive-thru cookie event in Syracuse, and we went and worked at that,” Siegenthaler continued. “They really enjoyed that, because it was at least somewhat of their normal thing.”

“They were a little disappointed that we couldn’t do our (typical) booth up at SUNY Oneonta,” she said. Last year, Lehr said, the six members of Troop 60546 “made close to $1,000 off of cookie sales,” though she estimated “that probably went down 40% this year.” Cookie sale earnings, Lehr said, will go toward a whitewater rafting trip planned for this summer.

“My favorite part was probably the cookie booths, which we aren’t doing this year,” Artale said. “I definitely missed out on that a lot.”

Leaders and Girl Scouts said, despite the challenges, customers have sweetened to the new selling methods.

“The people we’ve asked to order cookies have loved the idea that the girls are out there and still asking,” Siegenthaler said.

“With the door-to-door flyers, I was worried, ‘Are they going to understand the QR code?’ but they adapted to what we’re giving them,” Lehr said. “Even though (customers) didn’t see Girl Scouts, they know the Girl Scouts and still bought cookies. People know what they are and they like the cookies.”

“It’s been a really busy first weekend,” Alvarez said in mid-February. “It seems to be well received and we’ve had drive-up locations all across our territory. I’m in Syracuse, so I can speak for the drive-thru at the fairgrounds and Onondaga Community College, and troops are selling a lot of cookies. It’s a safe, contactless way to get those iconic treats and people still want them. We’re seeing a positive response; people still want to support the girls, raise funds for troops and they want the cookies.”

“That’s right around where we try to aim every year,” she said. “That’s something we try to reach collectively, and we think that’s an obtainable goal.”

For more information, including regional drive-thru sites and dates, find the “Cookies+” tab at gsnypenn.org.