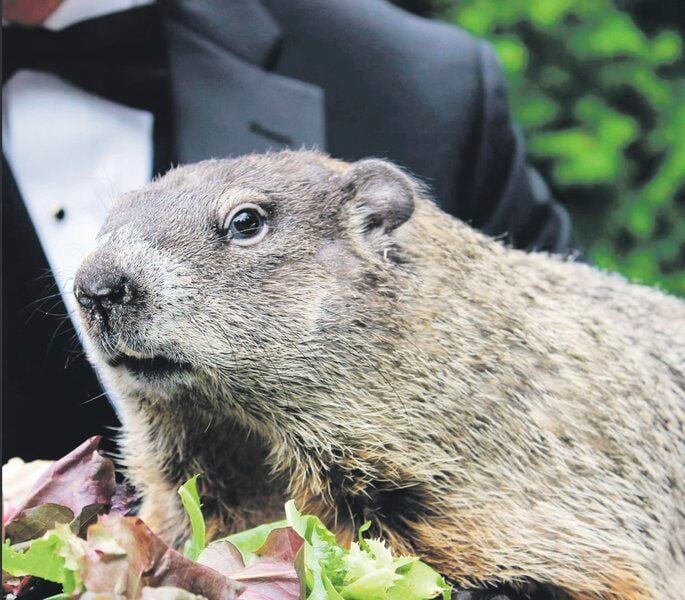 ContributedPunxatawney Phil, shown in this undated photo, is the best known of the nation’s weather-prognosticating rodents. 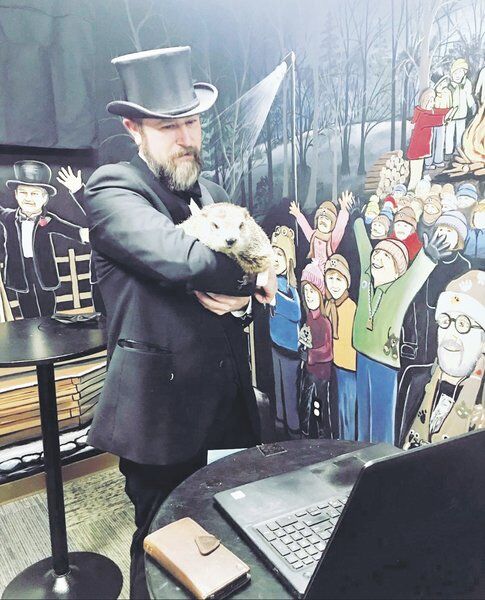 ContributedPunxatawney Phil, shown in this undated photo, is the best known of the nation’s weather-prognosticating rodents.

On Tuesday, Feb. 2, a marmot named Phil will emerge from his burrow in Punxsutawney, Pennsylvania and either predict winter’s continuing six-week grip or a quick-to-come spring.

According to experts, there’s more to Groundhog Day than most think.

“Groundhog Day is actually rooted in astronomy,” a Jan. 12 Old Farmer’s Almanac article states. “It marks the approximate halfway point between the winter solstice and the spring equinox (in the Northern Hemisphere).”

The day, the story states, has additional ties to the Celtic calendar, where it is known as Imbolc, an Old Irish term “most often translated as ‘in the belly,’ a reference to the soon-to-arrive lambs of spring.”

Groundhog Day also coincides with the Christian festival of light, Candlemas, and, in pagan culture, is known as St. Brigid’s Day, honoring a Celtic goddess of spring and light.

“It’s pretty interesting,” he said. “It’s not just taking a groundhog out; it has to do with the astronomical position of the planet and the sun, and that’s why it’s cross-cultural. There are lots of celebrations that are similar to (Groundhog Day), that’s just the one that’s continued on in present-day. It’s a midway point between the winter solstice and spring equinox and that’s why it’s in all these different cultures, because that’s universal.”

“Groundhog Day has a rich history,” the Jan. 12 article echoes. “It speaks to the triumph of spring over winter, birth over death … and the appearance of light over dark.”

That a groundhog became the symbol of the day, the story says, was a matter of flexibility.

“Historically, a groundhog wasn’t the animal of choice: a bear brought the forecast to the people of France and England, while those in Germany looked to a badger,” it states. “In the late 1800s, German immigrants to Pennsylvania brought their Candlemas legends with them. Finding no badgers, but lots of groundhogs (also called woodchucks or whistlepigs), they adapted the New World species to fit the lore.”

Jeff Grube, a 14-year member of the Punxsutawney Groundhog Club and its “inner circle,” or board of directors, said the club has been celebrating Groundhog Day since 1887. He, too, said the stateside lore began with German farmers.

“(The club’s celebration) was originally for fun,” he said. “The group that started it had a picnic and did a groundhog hunt — there are lots of groundhogs in Punxsutawney — and the farmers would eat the groundhog. At the same time, they were aware of a legend that had come over with German immigrants. It came over with those people, who were farmers, and the idea is to test the weather (because) it’s the exact middle day of winter … and weather was really important to them.

“That’s about when they identified Phil as a particularly gifted groundhog,” Grube continued. “We have a special concoction that’s been handed down since 1887 and we give Phil the elixir at the picnic. Every sip he takes gives him seven more years of life; it’s truly remarkable.”

Annual Groundhog Day festivities, Grube said, typically attract 15,000 to 30,000 people. This year’s abbreviated event, he said, will be conducted virtually because of the pandemic caused by the spread of COVID-19.

The roughly 15-minute prognostication — Phil’s prediction — at Gobbler’s Knob will begin around 7 a.m. on Feb. 2, Grube said, with just 13 members of the inner circle officiating. The event will be livestreamed via the club’s “Punxsutawney Phil” Facebook page and YouTube channel, he said.

Sandi Duncan, managing editor of the Farmers’ Almanac, said, while Phil doesn’t factor in the almanac’s long-term weather predictions, using lore for that purpose has long been agricultural tradition.

“Our stance with the groundhog is, we don’t hire him; he doesn’t work for us,” Duncan said. “But it’s fun and, in this day and age of technology and data, we respect him for the publicity he gets and making the day newsworthy.

“There’s still a lot of people that follow weather lore and believe it’s very accurate, and others are just kind of fascinated by it,” she continued. “We have a weather lore calendar that we put out, and we try to give some reasoning as to why these things happen … but, as we all know, nature is pretty hard to figure out. Our ancestors liked to think there would be a balancing act in nature (and) people still like to look to these natural signs.”

Kilbride, too, emphasized the historical role of the Old Farmer’s Almanac.

“When the almanac was started in 1792, everybody at that time had to have two books: the almanac and the Bible,” he said. “That was pretty much where all their knowledge (came from) and they farmed to survive and needed that to be successful.

“A lot had to do with weather,” Kilbride continued, “and it was really important to know when it was OK to start planting crops, if it had been a bad winter, when to harvest more, if the fields were going to flood, when it would be sunny. They put their trust in these methods handed down through the ages and things that people had noticed.”

While some have come to seem fanciful, Duncan and Kilbride said, weather-related myths aren’t without occasional merit.

“At the Farmers’ Almanac … we respect the fact that, years ago, people were in tune with nature a heck of a lot more than we are,” Duncan said. “A lot of the time, they would look at animals or acorns or the sky and predict an immediate type of weather. We have found that weather lore is more accurate if it’s a localized and immediate thing.

“Sometimes, these signs still prove to be true and that’s what keeps it going,” she continued. “It’s like a long game of telephone: people share things they’ve experienced and, over the years, some of them became a little farther-fetched than other ones, but it’s fun to see and there’s so many out there. There are some truisms.”

“It’s our nature to see patterns and to tell stories based on how we interpret the world around us, and that’s important to the almanac,” Kilbride said. “We’re all about tradition, with a hint of humor, and folklore is often both of those things, with a little bit of actual knowledge. Sometimes there’s a really simple explanation and sometimes it goes back so far that it’s been handed down through the ages, mutated and changed a bit.

“We keep them around because it’s important to our legacy and to understanding our ancestors,” he continued. “I think we’ll always have some form of folklore. These days, it’s sort of sped up with social media, so we see it in a different light, but something going viral is like folklore.”

And myths, Duncan and Kilbride said, run the gamut.

“There’s all kinds of beliefs,” Duncan said. “Thicker-than-normal corn or onion husks are supposed to be a sign of a harsh winter, (as is) the early departure of ducks and geese … or the early migration of monarch butterflies. The length of hair on the nape of cow’s neck is supposed to be an indication of a hard winter; ‘how high the hornets’ nest ‘twill tell how high the snow will rest’; if you count the number of fogs in August, that’s supposed to tell you the number of snowstorms in winter.”

It’s also said, Duncan noted, that the shape revealed within a sliced persimmon seed — either fork, knife or spoon — foretells winter conditions. A spoon predicts heavy snow (requiring much shoveling), a fork a mild winter with powdery snow and the knife cutting, cold winds. And, according to the Old Farmer’s Almanac, large beavers and fat skunks portend harsh winters, as do unusually thick turkey feathers.

“The woolly bear myth is always a really popular one,” Kilbride said. “If anybody thinks of weather lore, that’s the first that comes to mind. If the brown band is bigger, the milder the winter and, the more black (segments), the more severe. It became popular (because), in 1948, there was a Dr. Curran who was a curator of insects for the American Museum of Natural History … and he wanted to test it scientifically. He collected a bucket of woolly bears for eight years at a state park … and he got mixed results, but, because of his research, it was put into a bunch of newspapers.

“Some other goods one,” he continued, “are, when cats sneeze it’s a sign of rain; when cattle lie down in a pasture, it’s a sign of rain, and that one is kind of accurate; if moles dig their hole two and a half feet deep, it will be a severe winter, two feet, not so severe and one foot deep, pretty mild.”

Rich Townsend, a meteorologist and longtime physics and meteorology teacher at Sidney Central School District, said he sticks to science when predicting weather.

“It’s very tough to try and come up with a long-range forecast during the winter,” he said. “There are so many variables. I really have never tried to put too much emphasis on trying to forecast a whole winter. I can tell you three to four days out, and maybe 10 days out, but beyond that there’s too many variables. (Technology) has absolutely gotten better in the last 50 years and short-term (forecasts) are pretty good, but we can still be surprised.”

Looking ahead, Townsend said, often requires assessing what came before.

“Typically, you look at the longwave weather pattern of late fall, going into winter,” he said. “Most predictors look at November. Whatever kind of weather patterns set up in November tend to persist, then in a couple months you’ll see a shift in mid-to-late January, when things may change.”

“One (method) that I’m partial to is … looking more at the snowpack in Canada and the Arctic during November and how far south the snowpack is advancing in the late summer and early fall, in terms of how much snow will get to us.

“Another one … is how strong El Nino, or the warming of the Pacific Ocean, is,” Townsend continued. “That can tend to bring warm or cold or wet or dry conditions. And the North Atlantic Oscillation is all about upper-air patterns and looking at temps in the North Atlantic Ocean.”