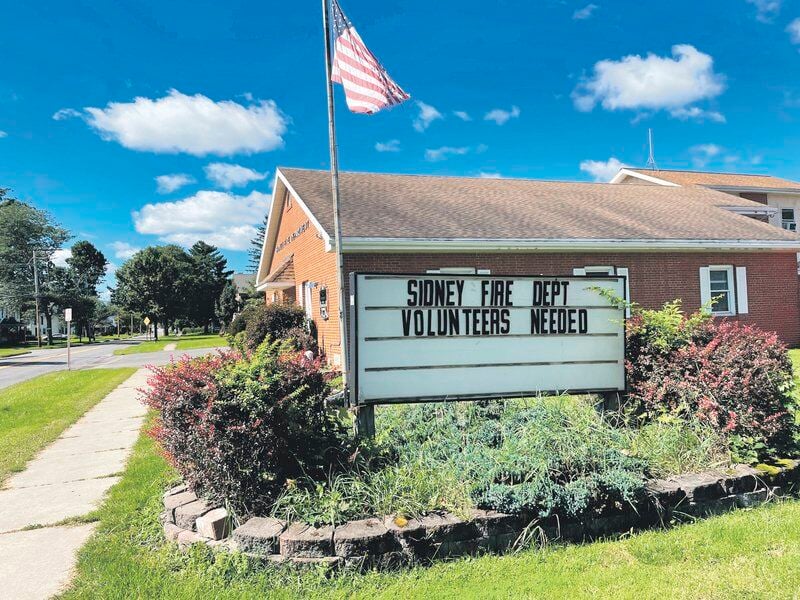 Allison CollinsA sign at the Sidney Fire Department on River Street in the Delaware County village announces the department’s need for recruits earlier this month. 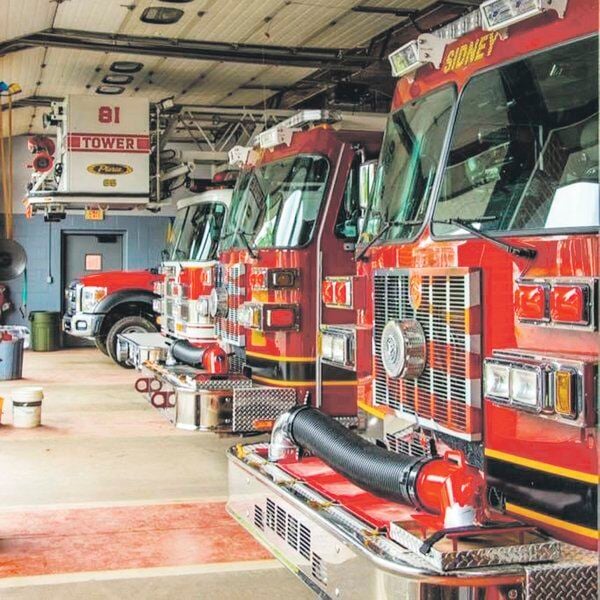 ContributedSidney Fire Department trucks are shown in this undated photo. 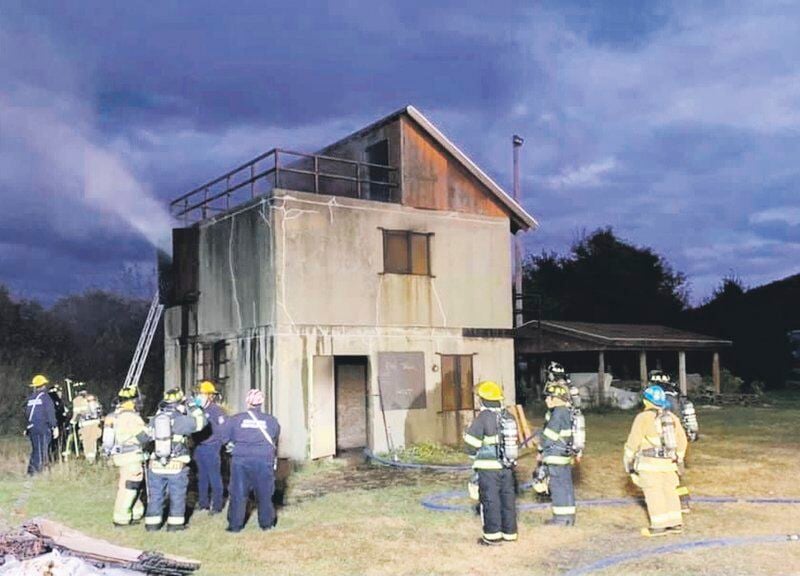 ContributedMembers of the Milford Fire Department participate in a training exercise at the Otsego County Fire Training Center in this October 2020 photo.

Allison CollinsA sign at the Sidney Fire Department on River Street in the Delaware County village announces the department’s need for recruits earlier this month.

ContributedSidney Fire Department trucks are shown in this undated photo.

ContributedMembers of the Milford Fire Department participate in a training exercise at the Otsego County Fire Training Center in this October 2020 photo.

Cooperstown Fire Department Chief Jim Tallman, 63, has been chief for 15 years and a member for 44. The 67-member department, he said, includes the village’s emergency medical squad and handles about 200 fire calls and 600 EMS calls annually. The department’s reach, he said, includes Cooperstown and the towns of Middlefield, Otsego and Springfield.

“My department is becoming an older department,” Tallman said. “If you look at all the members — and we’re fortunate to have some good, active young guys — the majority are older. We’re having a hard time like everywhere else, trying to recruit newcomers, but we have an especially hard time in the village of Cooperstown, because so many of the houses are rented out to Dreams Park (families) in the summertime and there’s just no apartments in the Cooperstown area, so if there is a young person who joins, they either can’t find a job or an apartment and they have to move to an area where they can.”

Andy Jones, secretary with the Milford Fire Department and EMS and a member since 2005 said, though, at 30, he’s one of the department’s younger members, the 59-member unit faces similar issues. The department, he said, is typically “in the 300 to 500 call range” each year, for fire and EMT. The department covers the town of Milford and surrounding areas.

“Both my grandfathers were on their respective fire departments and my mother, so it’s kind of in my blood,” he said, noting that he began as a member of the Explorers Club, through the Boy Scouts of America, at 14. “Probably our average age is late 40s or early 50s; our youngest is 16 and our oldest is early 80s, but (getting younger members) was hard even before I joined, more so than in the past.”

Ray Baker, EMS director and administrator for Sidney, as well as former fire chief of the Sidney Fire Department, said, while the village’s crews are paid, they share those concerns. The roughly 30-member EMS, he said, is a nonprofit organization funded by “revenue from billing insurance companies,” and not village taxes. The department, he said, is “on track to make 3,000 calls this year.”

“I’ve been with them since we formed it, which was April 2015, when we went online,” he said. “There’s about 30 employees … but we cover not only Sidney, but all the way to Oneonta, Afton, Walton and Gilbertsville on a daily basis. We have two crews — a 24-hour and a 16-hour crew — and an ALS (advanced life support) and a BLS (basic life support) on every rig.

“We’ve probably increased (membership) some, because we went to the two crews,” Baker continued, “but the unfortunate part is that all the services in the area kind of share the same employees, so when I say we have 30 members, there’s probably 12 that are full-time employees and the rest are part-time or per diem.”

Baker estimated that “about 80% of people who work for Sidney EMS work someplace else.”

“Fire volunteers are typically older men — there’s some (younger), but very few,” he said. “It’s mostly older gentlemen with some women. For EMS, it varies; I would say we’re 40/60, men from women, and mostly middle-aged … because they do it for a living and work two or three different places.”

Steve Hood, Delaware County’s director of emergency services, said, as a liaison for the county’s 17 emergency squads and 30 fire departments, he has “absolutely” seen a shift among emergency personnel demographics.

“It’s countywide, it’s statewide, it’s nationwide,” he said. “It’s a different generation of people and it’s been percolating probably for the last 15 years.”

For many, officials said, the commitment required to join collides with the demands of modern life.

“There’s a whole slew of reasons,” Hood said. “There’s a lot more people working out of town, your employers are less forgiving and don’t allow employees to leave to go on ambulance calls, it takes longer to do an ambulance call … a lot of people are working more than one job to make ends meet and both people in a household are wage earners now.”

“I wanted to volunteer and it just grew from there so I did the training process,” Jones, an interior firefighter and basic EMT, said. “But it takes time, because the courses are typically so long and trying to balance life and training courses is the hardest part. Your typical EMT course will last for six to 10 months of nighttime courses, one to three nights a week, depending on the course. And fire courses are about the same for the initial courses; there’s so much to really take in, that they just take that long. Having people that can devote that much time to those courses is the biggest factor.”

Recruitment concerns, Jones said, have been “discussed for years,” without resolution.

“It’s always an issue, trying to figure out your volunteers as a whole, never mind the training aspect,” he said. “Nine times out of 10, we have four to six guys to respond to a call and, if you’re going to a fully involved structure fire with six guys … that’s a tough battle to fight when you’re short-staffed. We have mutual aid, but everyone is in the same boat, especially during the daytime with everyone trying to work two or three jobs. Firefighting is a dangerous job and career, never mind doing it as a volunteer; if you’re doing interior firefighting, you’re risking your own life for nothing.”

Hood, too, said, despite top-down efforts, recruitment is lagging.

“The state has been running a program called Recruit NY for quite a few years, but it has not been very successful locally,” he said. “The issue is, there’s not one solution that’s going to fit everybody.”

Hood noted that the county does “a lot of outreach,” during the Delaware County Fair.

“It’s the same requirements for a volunteer as for a paid (member),” Baker said. “It entails going to school: about nine months of training, three nights a week. It is definitely (declining), especially on the fire side — I’ve been a firefighter for 36 years and chief for a lot of that — and it is falling off. The volunteers, especially, are aging and it’s hard to get younger volunteers because of family commitments. It takes two to work and they have jobs and kids and it’s hard to commit to the time you have to put in to be a volunteer. Every agency is struggling … and that’s something that’s been happening in the last five or 10 years.”

“I think people work more jobs than they used to,” Tallman echoed. “A lot of times, you used to have one main job and now you’re seeing people having multiple jobs to survive. (People have) families and women are working as much as men, if not more, and one person may work days, one evenings and they don’t have the time.

“I think it’s just a trend, that people don’t want to or aren’t donating enough of their time to take all the training,” he continued. “That’s one of the problems we have: we’ll get new members, then when they find out what they have to do after they’ve applied … it’s a long commitment and a lot of times they decide, ‘That’s not really for me.’ We’ve had a lot of younger ones in the last 10 years or so that have stayed for maybe five or 10 years and then, because of jobs or having to buy a house somewhere, had to move.”

Tallman said his department has “three ways people can join,” either as EMS exclusively, a firefighter or a member of the fire police.

“We have many people that do both sides of the house, EMS and firefighting,” he said. “EMT (certification) is longer, but depending on if you want to be an interior firefighter or not, to go through all the classes takes about the same amount of time as to become an EMT. We’re all professional, the difference is only career and volunteer, but we take the same classes.”

For those who do make the commitment, experts said, the cause is a constant.

“The majority of our older members, we’ve had for quite a while,” Tallman said. “It’s just the fact that, ‘I want to help all my neighbors’ and if I had somebody in my family injured, I’d want to make sure somebody would be responding to those calls.”

“The people that you see sticking it out have established themselves here,” Hood said. “They’ve made it a part of their life. I think that’s the biggest part: it becomes a lifestyle for those people and, regardless of what they do for a living, volunteering is a lifestyle.”

“I think, for most of them, it’s the fact of helping people,” Baker said. “Whether paid or volunteer, you’re helping people every day.”

“Ultimately, it’s helping your community and being the members of the brotherhood of the fire department and EMS service,” Jones said. “Everybody, if they sign up to do it, really wants to try to help and make something better. Whether it’s putting out a fire, extracting someone from a vehicle, performing CPR and bringing somebody back or getting somebody that’s sick to the hospital, it’s the feel-good factor of actually doing something worthwhile.”