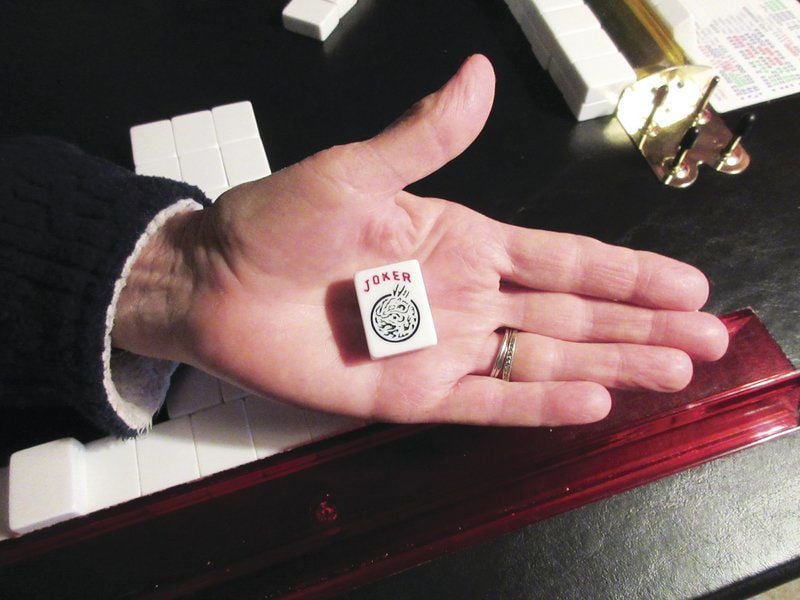 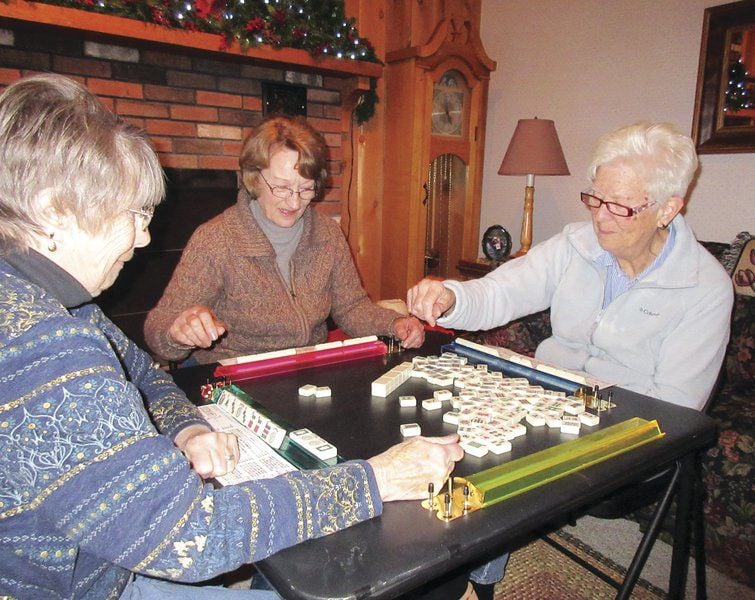 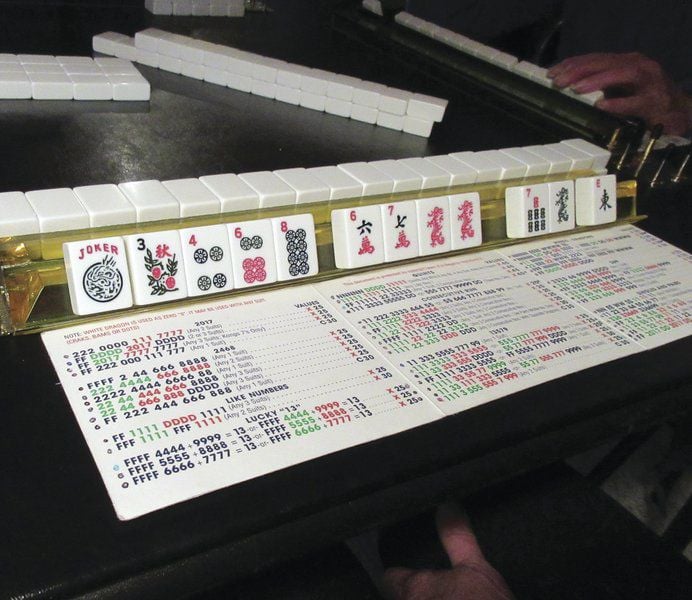 A Mahjong card with a list of hands to achieve is pictured. A new card is issued each year.

A Mahjong card with a list of hands to achieve is pictured. A new card is issued each year.

Supposedly, Mahjong began in a Chinese dynasty era. It became a regular part of society in the middle to late 1800s. In the 1920s, Mahjong was brought to the United States.

Curiously, the game was banned in China in 1949, along with other gambling activities, but regained legalization in 1985.

Today, Mahjong is played around the world. Each country sports its own version, but similarities seen are racks; between 136 and 166 tiles marked by three suits of bamboos, characters and dots, each numbered 1 through 9; eight flowers or jokers; and Mahjong cards with a list of possible hands.

Usually, four players play a game. There are three- and five-player versions, too. Players can also play online.

As for the cards, they cost $8 each per year and can be purchased through the National Mah Jongg League in New York City. The cards contain a list of hands. The goal is to get all the hands within the year from April to April.

Kerry Hart, an employee at the Walton library, said, “Mahjong groups meet Tuesday from noon until about 3 p.m. and on Thursday evenings. The games started about five years ago and gatherings have remained pretty consistent.”

The library has a Mahjong set available to use, but, “Most often the ladies bring a set,” Hart said. “They also bring snacks.”

Tables are set up downstairs at the library. “I like having them here,” Hart said. “It makes the day go by faster.”

The following scene was observed at the home of Ellie O’Hara in East Meredith.

Inside the home, in the living room, stand two card tables, each holding a Mahjong set. Platters of cheese and crackers adorn the nearby table in the dining room. O’Hara greets five women — Barb Ackerley from Hobart, Pat Thomson from Delhi, Sue Pearson from Delhi, Linda Palm from Stamford and Carol Dibble from Bloomville.

The group has been meeting to play Mahjong every Tuesday from 9 a.m. until 1 p.m. since about 2002. Membership in the group has changed over the years as a few deaths have occurred and new players have been invited to join.

They trade off meeting at one another’s homes, oftentimes carpooling.

Life revolves around Mahjong. On Tuesdays, there are no doctor’s appointments and no visitors planned. No getting sick. “We’re dedicated. We’re playing Mahjong on Tuesday,” Dibble said.

“Well, we can take vacations every now and then,” Pearson said.

“Yes, we could go on a Mahjong cruise,” Palm said. “But those people are too serious, whereas we don’t play for money.”

“And they wouldn’t let us on the boat because Pat would want them to break the rules,” Dibble said.

“Well, some of the rules are pointless, senseless,” Thomson said. “And I’m the newbie so I should get breaks.”

“Oh no, you’re no longer the newbie. You’ve been off probation for a while now,” Ackerley answered.

While talking, the women are organizing and stacking tiles as if on a mission. “We call the stack ‘The Great Wall of China,’” O’Hara said.

“Then, we each pick 14 tiles before passing bams, cracks, dots and dragons,” Ackerley explained.

“It has its own language,” Palm said. “We call it the Charlestown when passing tiles, showing how Americanized the game is here.”

Then, from the anxious passing of tiles came a voice of despair. “Oh no, I didn’t want to pass that tile,” Dibble said before admitting, “Sometimes we get chatting and lose our spot.”

“Speak for yourself, I’m sharp as a tack,” Thomson said.

“Wow, that’s great. It’s difficult to get a hand,” Pearson said. “Sometimes we go days or weeks before getting a hand.”

When a hand on the list is achieved, it is marked off.

“I never get a hand,” Thomson interjected, as O’Hara was studying her card.

“I come for the cheese,” Thomson joked.

This particular group of Mahjong players has also stacked up tales to tell.

Palm said, “I don’t know what it is, but when I host Mahjong Tuesday, things happen. Once Ellie backed into our basketball pole. Then Carol backed into my husband’s truck.”

“He left it in the way,” Thomson said.

“Plus, it gave him an excuse to buy a new one,” Dibble said.

Although the women assure the observer that Mahjong is “a game of luck,” the Confucius Institute at the University of Oklahoma says on its website that Mahjong (pronounced ma jiang) is a Chinese game of skill, strategy, and calculation.