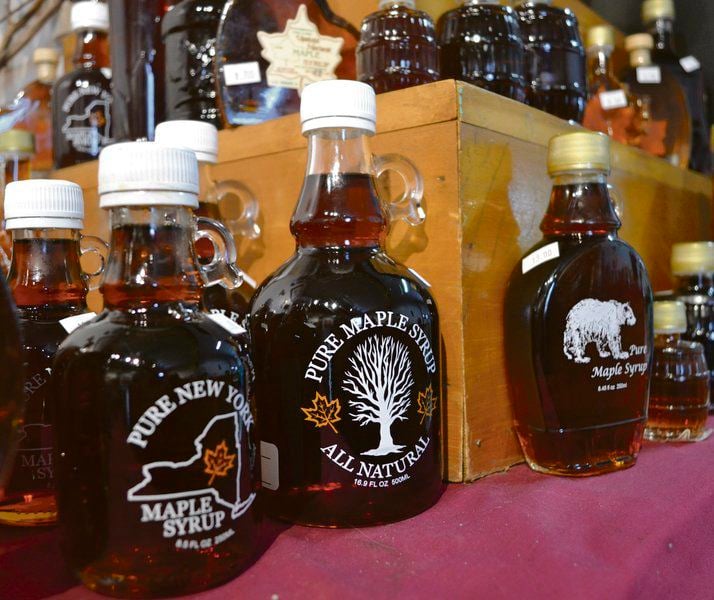 Allison CollinsBottles of maple syrup are displayed at Upstate Harvest in Bainbridge earlier this month. 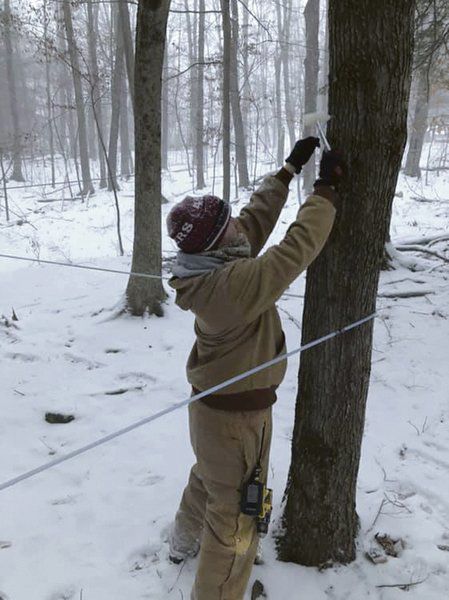 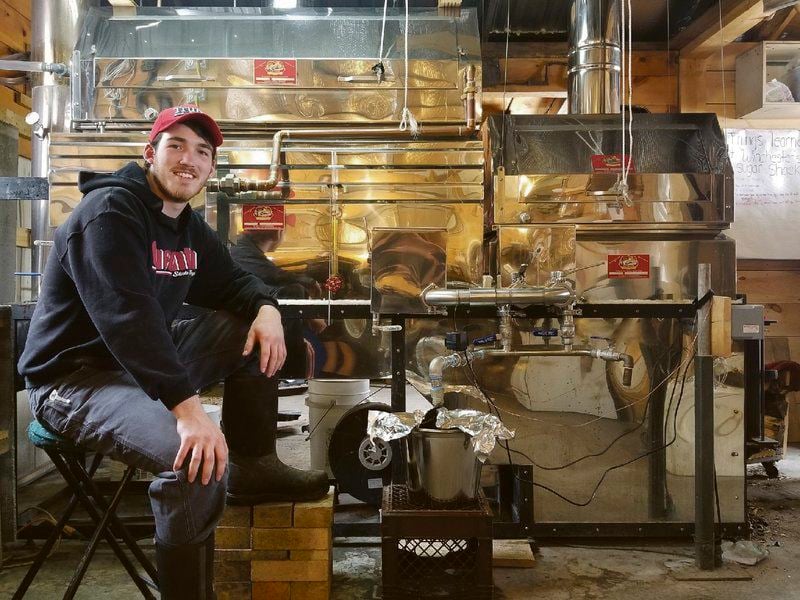 ContributedTrevor Winchester of Winchester’s Sugar Shack in Unadilla sits in front of his evaporator, where sap is turned into syrup, in this undated photo.

Allison CollinsBottles of maple syrup are displayed at Upstate Harvest in Bainbridge earlier this month.

ContributedTrevor Winchester of Winchester’s Sugar Shack in Unadilla sits in front of his evaporator, where sap is turned into syrup, in this undated photo.

Whether hobbyists or full-timers, most producers tap from early February through mid-April, weather permitting. Though the window for collection and boiling is small, producers said, making maple syrup means year-round commitment.

“There’s a six- to eight-week period of springtime weather that is typically the season,” Tiffany Wrench, 36, of Windy Acres Maple Syrup at 2733 state Highway 206 in Coventry, said. “Everything else gets put on the back burner then, because that’s the only time you have to make that syrup. We want it above freeing during the day and just below at night; you want to tap when it’s cold, because it decreases the possibility of bacteria growing in the tree. If it gets warm and stays warm, that’s what ends the season.

“But the maintenance of the woods is year-round,” she said. “The tubing is attached to a main line … and we have a vacuum pump, constantly pulling on the trees to increase the sap. We have to make sure the pumps are hooked in, the tubing is good and not chewed, there are no trees that have come down from storms and you want to make sure you have a certain grade, so (the sap) is not traveling uphill.”

Windy Acres began as a hobby five years ago, Wrench said, after her husband, Greg, revisited a childhood experience. The Wrenches made maple the family business three years ago, she said. Though Wrench said Windy Acres is “a small farm in the big maple picture,” the Wrenches tap between 1,500 and 2,000 trees on their 100 acres, producing between 250 and 300 gallons of syrup annually.

On average, Wrench said, it takes 40 gallons of sap to produce one gallon of syrup.

Longtime producer Melody Bush, 48, said she and husband, Brian, “usually tap around Valentine’s Day and never boil past April 1.” Though the Bushes have owned Upstate Harvest at 1 Freiot Ave. in Bainbridge for two years, they previously operated Bush’s Sugar Shack in Harpursville for 26 years. The Bushes have 500 acres of trees, about 12,000 of which are tapped, Bush said, and produce about 1,700 gallons of syrup annually.

“Everything depends on Mother Nature,” she said. “Every time we get a bad windstorm, the guys go into the woods to make sure things didn’t get ripped down and I’m year-round, because I run this (shop) and do farmers’ markets.”

“I got started helping out a friend,” he said. “When I was 12, I bought my first evaporator and made like 9 gallons, then just kept adding and adding. I’m on my third evaporator and up to 1,000 taps. It’s turned into a professional thing and I sell all retail, at farm stands and out of the sap shed.”

Winchester, too, said the brief season belies the commitment behind the craft.

“The hardest part is the cleanup,” he said. “That, and maintaining the tubing, keeping your lines tight and your vacuum going. February through March, you have to have your ducks in a row, because one breakdown really makes it hard.”

“It was a family thing that started 26 years ago as a hobby,” Tittle, 33, said. “Our brother would tap a few trees and we would boil it on our mom’s kitchen stove until the wallpaper started peeling, then we boiled over an open flame outside. From there, my dad … built us a sugar house and we were able to buy an actual evaporator, then we just continued to grow every year and it (became) our livelihood.

“Our season is from January to April and then cleanup,” Tittle said, “but for us, it’s more or less year-round because once (tapping) season is over, it’s market season and we do a lot of local markets and work with a couple of distributors, and they’re ordering year-round.”

Walling, 27, said the family typically taps its 5,600 trees “right after Christmas or the New Year.”

“It takes a while to get them done and we want to take advantage of every warm spell,” he said, “because we want to make as much syrup as possible.”

“Every year is different, because of the weather,” Walling said, “but generally what we’d like to get is half a gallon of syrup per tap and, for the past couple years, we’ve made over 3,000 gallons (annually).”

Even smaller-scale setups are serious work.

“There’s a lot that goes into setting up one of these operations,” Ralph Morse, 56, of Cooperstown Maple Works, said. “It is a labor-intensive process — between getting out in the woods, setting the tap lines and doing the work.”

Morse, a retired environmental engineer, began Cooperstown Maple Works last year, tapping about 400 trees on his 150-acre parcel of Cooperstown-area property. Morse said he hopes to “get up to about 2,500 taps in the next five years.”

“It’s nice to see a lot more people taking off with it,” Wrench said.

“There are a lot of people that do it and I sell tons of maple equipment,” Bush said.

“I think it’s definitely expanding and there are a lot of young people and new people getting into it and investing in new woods and setups,” Walling said.

“In terms of the market,” Tittle said, “maple syrup is one of the most healthy and natural sweeteners you can get, so as people are becoming more health conscious about sugars, we’ve found that demand is definitely increasing.”

With that, Tittle said, Walling’s has diversified its maple-y offerings.

“We’ve expanded quite a bit into the candy and cream,” she said. “And we do granulated maple sugar, cinnamon maple cream, maple popcorn, maple cotton candy, maple-covered nuts and our newest product is a bourbon barrel-aged maple syrup and it’s amazing.”

Walling’s retail space in the family’s original sugar house is open daily from 8 a.m. to 8 p.m.

“It’s all popular,” Bush said, “and we ship around the world.”

Wrench said Windy Acres Maple also ships to different countries, but enjoys a “good foundational base of support” throughout Afton, Bainbridge, Coventry and Greene. Their maple candy, she said, is especially popular.

“The maple sugar leaves are one of our fortes,” she said, “and one of the things we really take great pride in. My husband is very picky about it, but it shows.”

Despite the long hours and hard work, producers said, the rewards are sweet.

“I love it, and the fact that you’re making something from nothing,” Winchester said. “It’s something I’ll never not do. It’s like a disease and if you talk to anybody that does it, they’ll say you just get hooked and there’s no stopping.”

“I like knowing that I’m able to utilize the resources that I have on my property in a sustainable way and create something that hopefully will benefit future generations,” Morse said. “I have these resources that I’m trying to capture the best way that I can.”

“It’s time-consuming, it’s expensive … and it’s a big responsibility,” Wrench said, “but it’s so rewarding. And it’s so nice to have tons of maple family — not just customers, but maple producers supporting other maple producers. It’s a whole new community to open yourself up to and there’s great camaraderie.”

“All of us like being outside and connecting with nature,” Walling said, “so I think it’s rewarding to be out in the woods and also to make a product that you can call yours and is something that you can take pride in.”

“We’re really proud of the syrup we produce,” Tittle said. “We strive to be the best, but also constantly be getting better. I used to work at a desk job … and I would much rather be out doing things where you’re able to work with your hands and, at the end of the day, look back and see what you were able to accomplish.”

For more information or events related to New York’s Maple Weekends, March 21 and 22, and 28 and 29, find each featured producer on Facebook.