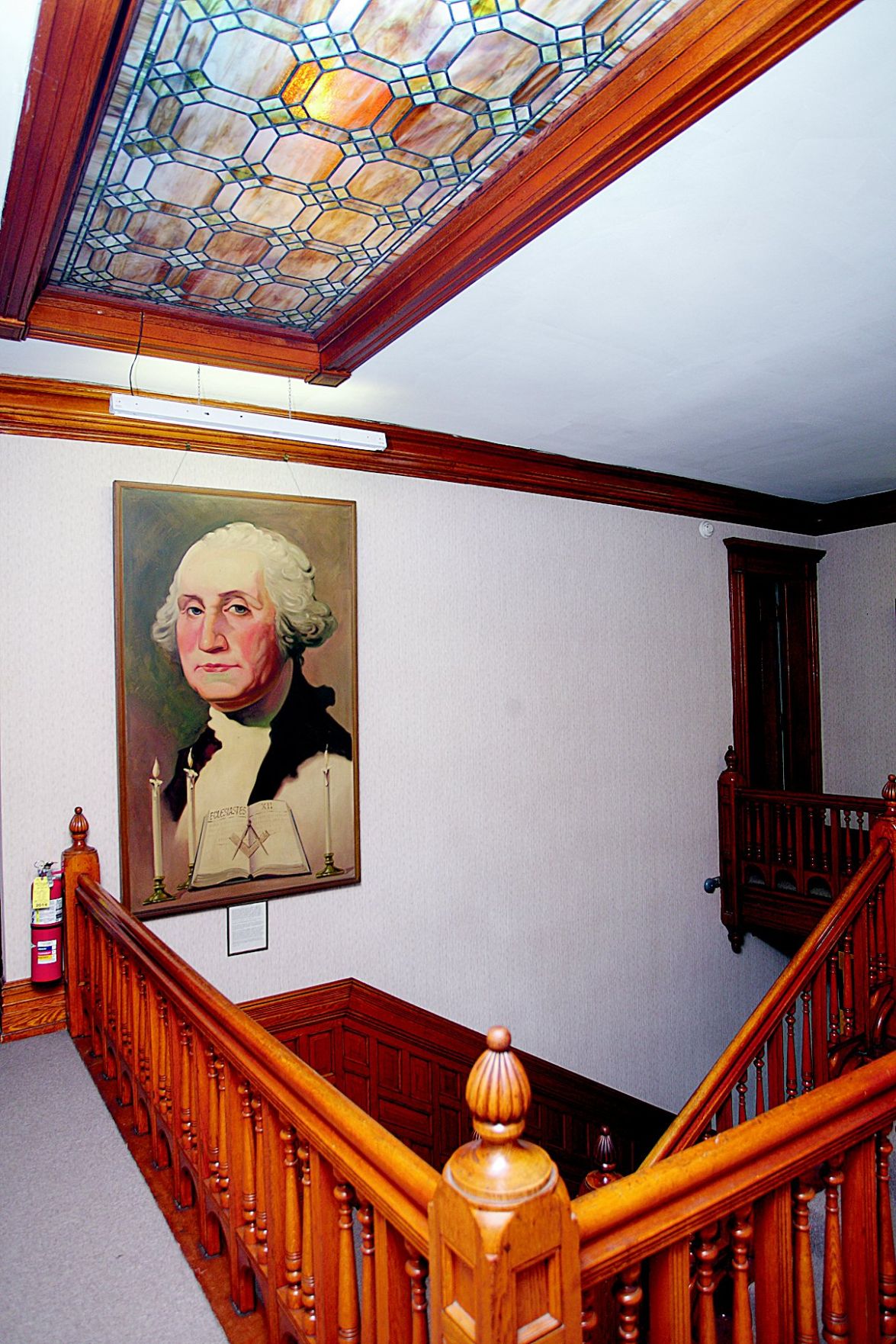 A portrait of George Washington, who was a Freemason, hangs over the grand staircase in the mansion. 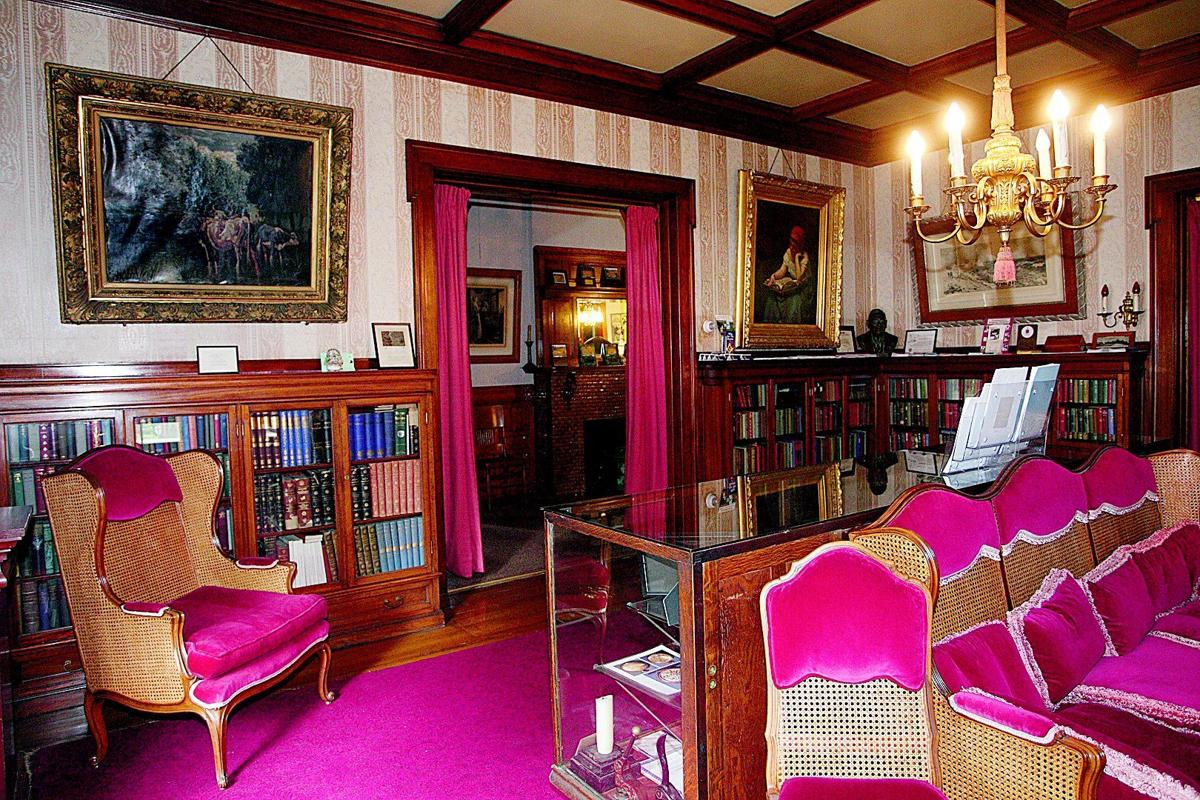 The library of the Fairchild Mansion, purchased by the Masons in 1929. 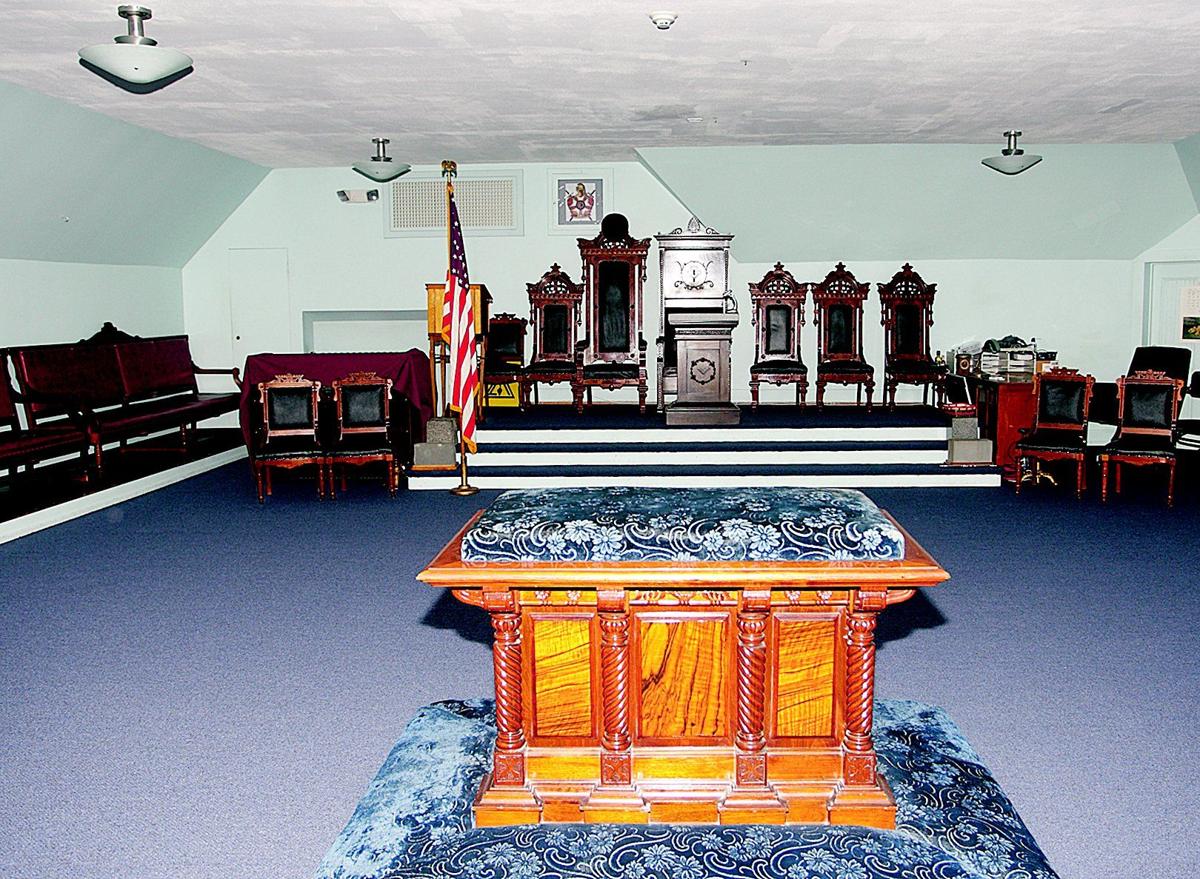 photos by Julie Lewis | The Daily Star The lodge room, with the Worshipful Master's Station on the back and altar in the foreground, is on the third floor and was formerly a ballroom. 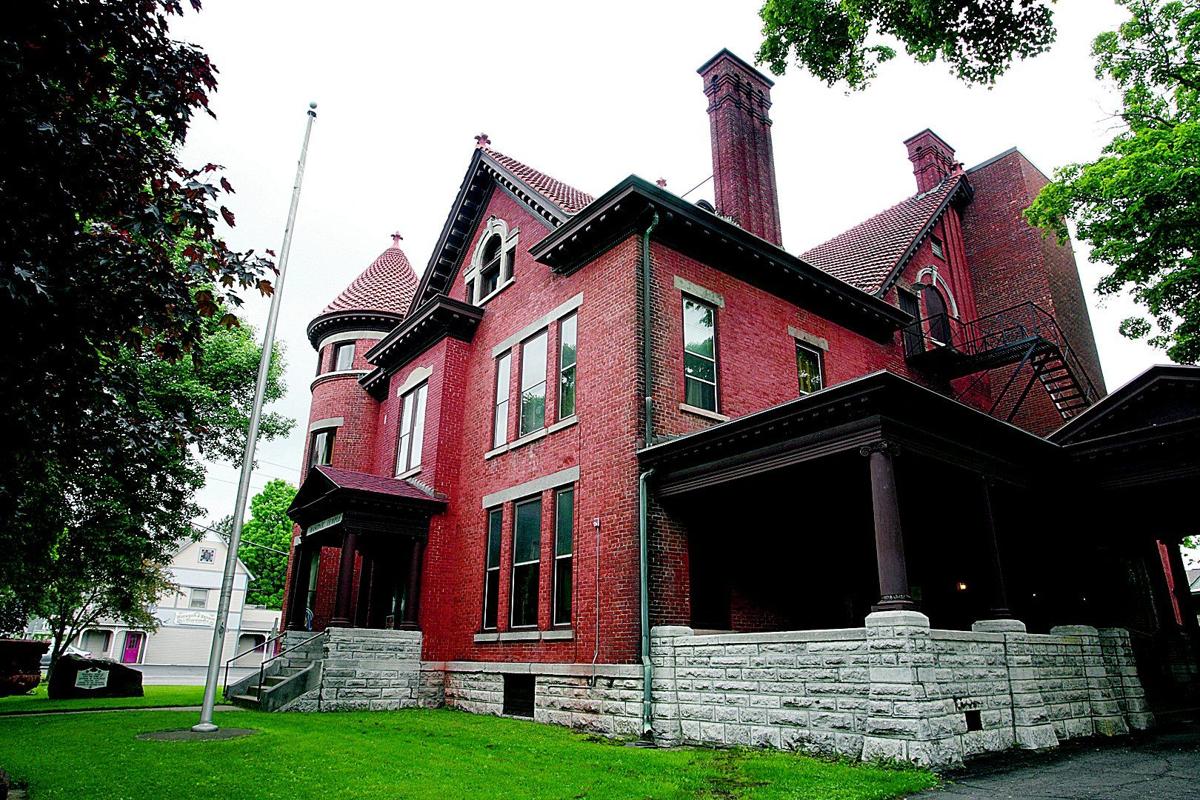 The Masonic Temple on Main Street in Oneonta is seen on Wednesday. 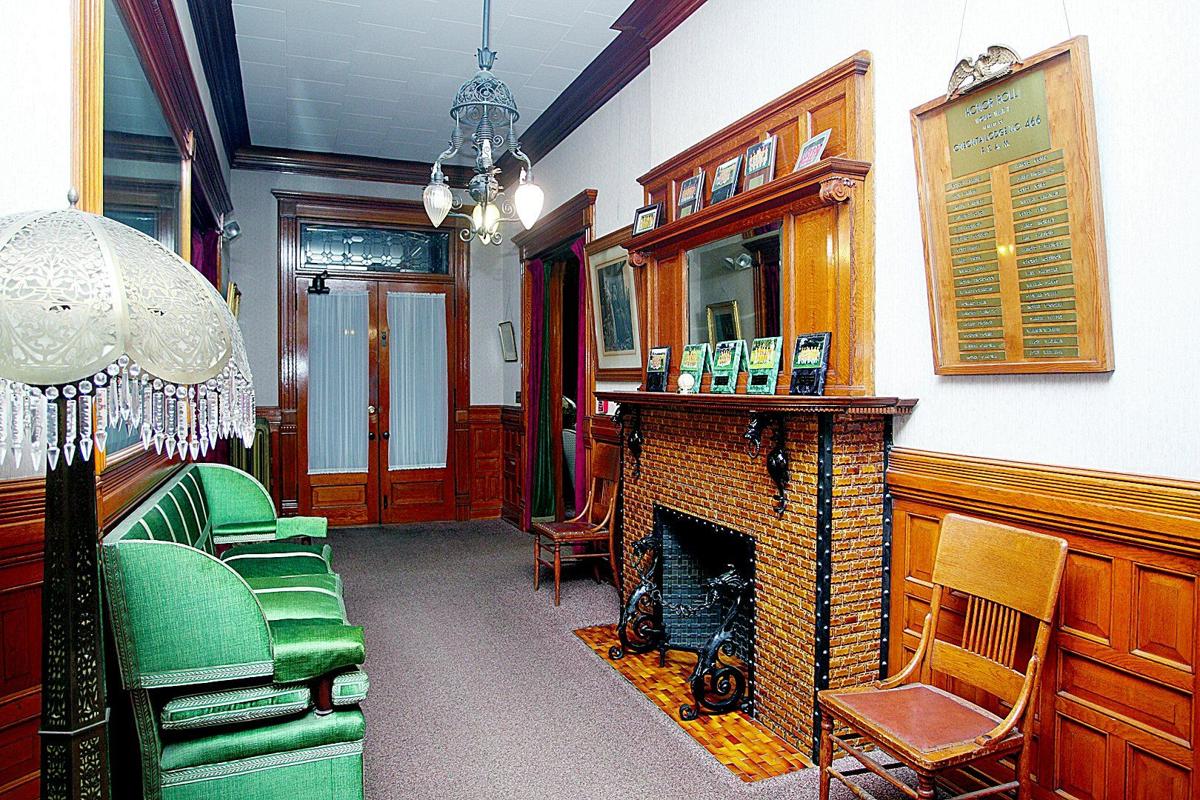 Julie Lewis | The Daily Star The main entry hall of the Fairchild Mansion, the Oneonta Masonic Lodge, is decorated with photos of sports teams the lodge has sponsored, as well as a plaque dedicated to members who served in the armed forces during World War II, at right.

A portrait of George Washington, who was a Freemason, hangs over the grand staircase in the mansion.

The library of the Fairchild Mansion, purchased by the Masons in 1929.

photos by Julie Lewis | The Daily Star The lodge room, with the Worshipful Master's Station on the back and altar in the foreground, is on the third floor and was formerly a ballroom.

The Masonic Temple on Main Street in Oneonta is seen on Wednesday.

Julie Lewis | The Daily Star The main entry hall of the Fairchild Mansion, the Oneonta Masonic Lodge, is decorated with photos of sports teams the lodge has sponsored, as well as a plaque dedicated to members who served in the armed forces during World War II, at right.

Tools such as compasses and squares that look as though they belong in a mechanical drawing class.

Titles such as Knight of the Brazen Serpent and Master of the Royal Secret, which sound like characters in fantasy novels.

And rumors of secret passwords, rituals and handshakes.

A little creepy, no?

No, not really. It all belongs to the world of one of America’s oldest institutions, the Freemasons.

MEET ON THE LEVEL

Freemasonry, according to Richard Vang of Otsego Lodge No. 138 in Cooperstown, is “a very large and complex subject,” an intricate tapestry of historical fact and myth that began in the Middle Ages of Europe and evolved through the centuries into the international fraternal organization of modern times.

Vang, who lives in Schenectady, is an historian of Freemasonry. He wrote and published the books “History of Otsego Lodge No. 138 F.&A.M. Cooperstown” and “My Dad Is a Freemason.” He has been a Mason for 23 years.

According to Vang, the roots of Freemasonry are in the craft guilds of medieval Europe, particularly those that organized and regulated stonemasons, who built cathedrals and other grand edifices, many of which have survived to the current day.

Medieval and Renaissance stonemasons progressed through stages in their craft. Each mason began as an entered apprentice, advanced to the status of fellow craft, and finally to master mason. They met in formal groups known as lodges.

Stonemasons kept their knowledge of the craft secret, according to Bruce Van Buren, secretary and past master of Oneonta Lodge No. 466. Van Buren has been a Freemason for 44 years, he said.

“In order to keep the secrets of their trade, they used secrets,” Van Buren said. Hand signals were employed so that stonemasons would recognize each other, symbols and passwords were created to impart information and secret rituals with oaths developed to mark the advancement of stonemasons in their craft. “There were religious aspects to the rituals,” Vang said.

In Scotland and England during the early to mid-1600s, Vang said, lodges began to attract men in trades and professions related to construction, such as architects and engineers, in addition to the operative masons (that is, those employed in stonemasonry). These newer members, referred to as speculative masons, had keen interests in the experimental and natural sciences and philosophy and self-improvement, as well as the more esoteric fields as alchemy and the occult sciences, according to Vang. The speculative masons would “connect the alchemical symbols to philosophical” ideas, Vang said.

As construction of great buildings in Europe waned, more of these learned men of the Enlightenment joined lodges, bringing with them their philosophical preoccupations. One of them was the equality of all men, or egalitarianism. Not all European societies were sympathetic. “Equality was threatening to some in Europe,” Vang said. In France, “there were whisperings about all the Masons (being) up to no good. At the height of the Enlightenment, (Masons acquired) some enemies.”

England, which had a constitutional monarchy with a strong Parliament, was more welcoming to Masons. In 1717, the First Grand Lodge of England was established in London, and Enlightenment men “joined in droves,” Vang said.

However, Vang said, “There was one place where (Masonic egalitarianism) sits very well with the people — that’s America.”

When Freemasons conclude a meeting, they recite a series of three statements, the first one of which is “Meet on the level,” a reference to a building tool used to ensure that the what is under construction is straight and true and of equal height. “We pride ourselves on the fact that every member is ‘on the level’ inside the lodge,” Vang said.

ACT ON THE PLUMB

The principles of good stonemasonry were adapted by speculative Masons as guidelines for living. Stonemasons’ tools such as a plumb line and a right-angled device called a square, used to ensure correct and solid design and construction, symbolized the need to work consciously to live an upright and purposeful life. God was referred to as the Supreme Architect of the Universe, and the above-mentioned eye represented the all-seeing ways of the Divinity. These principles are held by Freemasons to this day.

According to Vang, to be a Freemason, one must profess belief in a supreme being. It is not important to the organization which being one worships, although the majority of American Freemasons are Christian. It may be noted that Continental, or Progressive Freemasonry, most popular in France, accepts atheists.

Modern Freemasonry involves some study. Biblical stories, intertwined with figures from Greek philosophy and esoteric mythologies, are used to teach moral principles by which Masons are called to live their lives. Freemasons state that their organization is not a religion, but is intended to supplement a Mason’s religious beliefs.

“Charity is a big part of Masonry,” Vang said.

Perhaps even more so is Masonic brotherhood, or fraternity, according to Van Buren. “Our charity is to take care of each other,” Van Buren said.

He discussed the Brotherhood Fund, to which all Masons contribute. The money held in the fund are used to defray the expenses of Masonic brothers in need and to care for the widows and orphans of Masons. The Otsego-Schoharie District of the Masons, which is composed of numerous lodges in the area, supports a Masonic retirement home and orphanage in Utica.

Even so, Freemasons do contribute significantly to their communities.

“A charitable corporation exists,” Vang said, and local Masons sponsor events such as a fundraising golf tournament and a Cooperstown Winter Carnival hike, donate to Little League and food banks, and highway litter pickup. According to Vang, much Masonic charitable work “falls under the radar.”

Freemasonry has been in the region for about two centuries. According to Van Buren, in 1814, DeWitt Clinton, then the Grand Master of the Freemasons of New York, chartered a lodge in Milford, which then included Oneonta. Simeon Walling owned a tavern in these environs and the lodge probably met upstairs there.

An Oneonta lodge was chartered in 1859, the same year as Cooperstown’s Otsego Lodge. Many more lodges were chartered in the region, but a number of them closed due to anti-Masonic feeling in the mid-19th century.

To become a Mason, Van Buren said, any interested man must approach an individual Mason or lodge and attend meetings. “You need to join of your own free will,” Van Buren said. “Masons may not ask someone to be a Mason.”

After inquiries are made to determine that a prospective member is of good character, the candidate will receive training in Masonic history and principals and then he will be initiated in a ceremony. Study will continue so that the Mason will advance through degrees in a manner paralleling that of stonemasons in the medieval craft guilds.

DEPART ON THE SQUARE

Vang emphasized that Freemasonry is intended to support a man — and Masons do not accept women as members — in his life commitments, to God, family and work. The architectural square is used to ensure accurate right angles, and Masons are required to live by their high principles once they leave the up building atmosphere of the lodge meeting.

In 1868, two Freemasons decided that a similar organization that would welcome women as well as men would be a worthwhile endeavor. Over several years, they established the Order of the Eastern Star, which, according to Diane Graf of Cherry Valley, is the largest fraternal organization for men and women in the world, with more than 1 million members.

Graf is the District Deputy Grand Matron of the Otsego-Schoharie District of the Order of the Eastern Star. Graf said that the purpose of the order is to “help one another and humankind in general,” with principles based on “charity, truth and loving kindness.”

“I really love this organization,” Graf said. “They’re very giving people. It’s open to anyone. I would recommend that anyone who’s interested should call.”

According to Graf, the OES, along with local Masons, supports a medical research laboratory in Utica, donates to local food banks, supports Alex’s Lemonade Stand, which benefits the fight against pediatric cancer, and raises funds for scholarships, among many other benevolent activities.

“I can’s emphasize enough what good things this organization does,” Graf said.