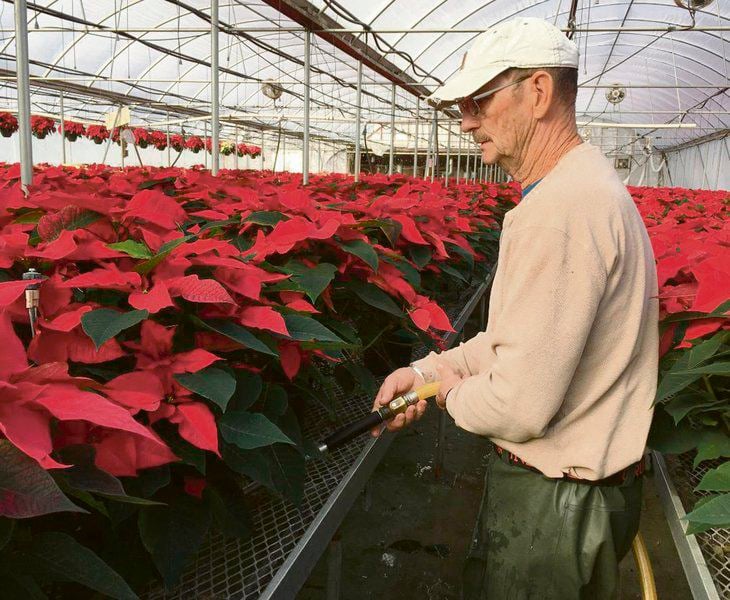 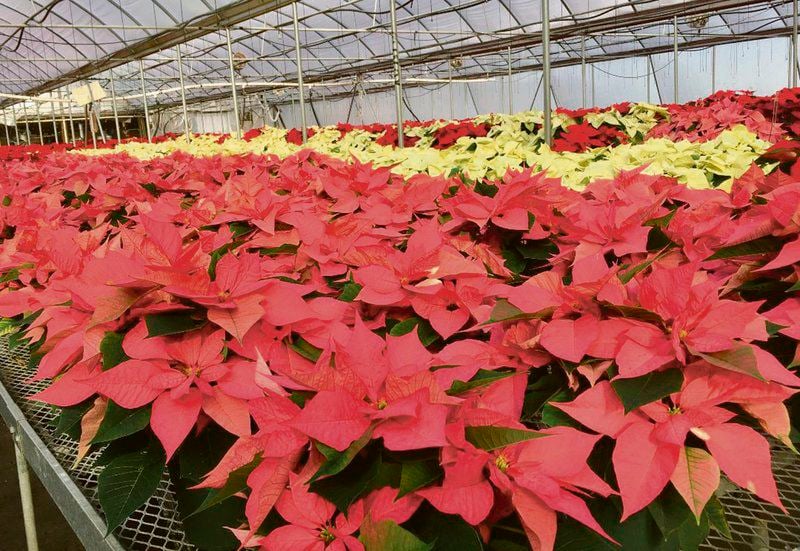 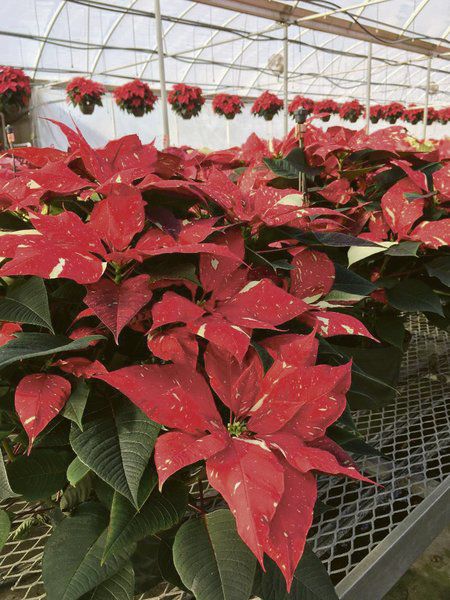 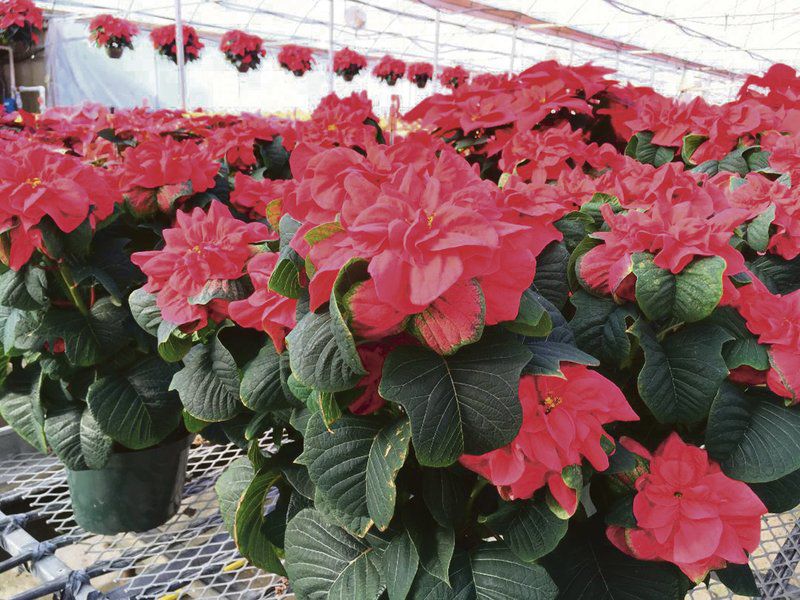 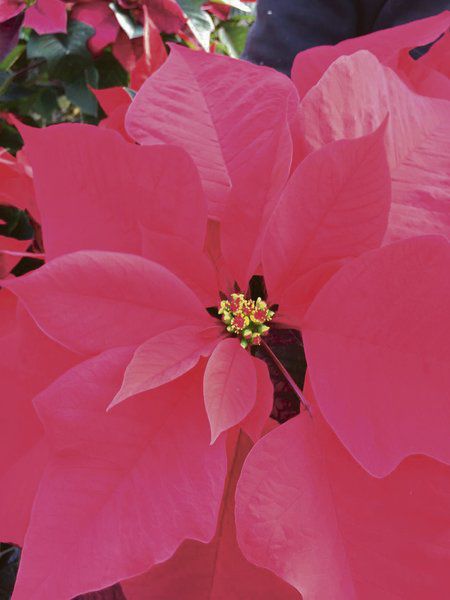 Allison CollinsThe poinsettia flower, Wilms noted, is in the center of the plant. ‘The foliage is what’s turning red and pink,’ he said. ‘That’s one of the biggest misconceptions.’ 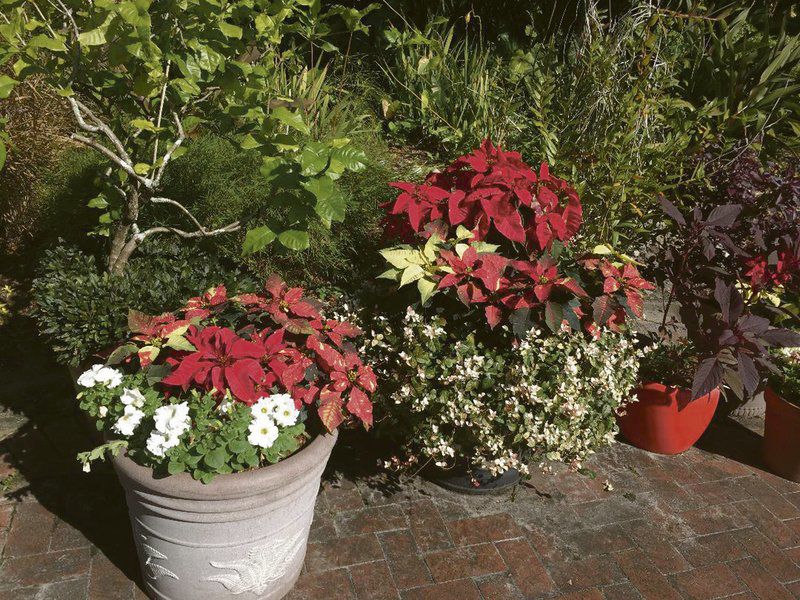 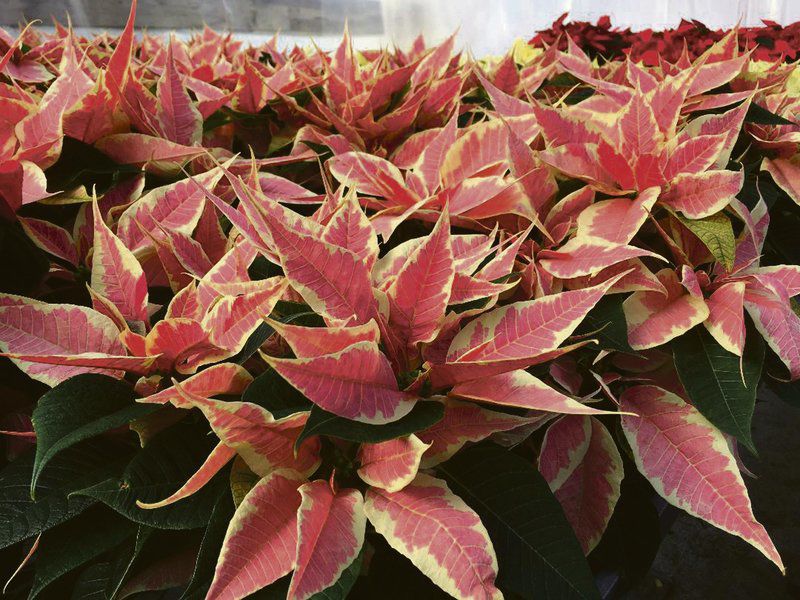 Allison CollinsThe ‘marble’ poinsettia variety is one of several available at the Mount Vision Garden Center.

Allison CollinsThe poinsettia flower, Wilms noted, is in the center of the plant. ‘The foliage is what’s turning red and pink,’ he said. ‘That’s one of the biggest misconceptions.’

Allison CollinsThe ‘marble’ poinsettia variety is one of several available at the Mount Vision Garden Center.

Second only to a shaggy-needled, snow-dusted fir, the poinsettia is one of the most recognizable botanical symbols of the holiday season. Prized for its vibrant foliage and season-long staying power, the Central American plant, variously known as flor de nochebuena, or flower of the holy night, lobster flower or flame-leaf flower, becomes ubiquitous in homes, churches and shops each December.

According to the Farmers’ Almanac, some believe the plant resembles the Star of Bethlehem, while others hold with a Mexican legend of a poor, young girl seeking a gift for Jesus on Christmas Eve. The legend suggests that, after conference with an angel, the girl picks roadside weeds that miraculously burst into color upon presentation to the baby.

History credits American physician, diplomat and amateur botanist Joel Roberts Poinsett with sending samples of the plant from Mexico City to the United States in the mid-1800s. According to various sources, second-generation California farmer Paul Ecke popularized the plant in America throughout the 1920s, after discovering a special grafting technique. The University of Illinois Extension’s “Poinsettia Pages” estimates that “the Paul Ecke Ranch in California grows over 70 percent of all poinsettias purchased in the United States and does about 50 percent of worldwide sales.”

In 2002, the House of Representatives declared Dec. 12, the day on which Poinsett died in 1851, National Poinsettia Day, honoring Poinsett and Ecke.

Local growers said, though a tricky crop to cultivate, hybridization has made the poinsettia long-lasting once in bloom. And while the plant’s popularity centers on Christmas, its growing season starts mid-summer.

“They’re a Christmas favorite, because they bloom at Christmas,” George Schaefer, 80, of Triangle said. “We would start rooting cuttings in July, for bigger plants, and that goes on through Labor Day; after Labor Day, we don’t root anymore, because it gets too late.”

Though retired from poinsettia-growing, Schaefer has operated Schaefer’s Gardens in Triangle since 1976; before that, he noted, his parents operated an earlier version of the wholesale nursery begun in 1934 in New Jersey. Roughly 20 years ago, Schaefer said, he was growing 20,000 poinsettias annually, before oil prices made doing so prohibitively expensive.

“They’re what you call a short-day bloomer,” Schaefer said. “They flower when the days get short, but really initiate buds around the first of October.”

Ed Wilms, 43, co-owner of Mount Vision Garden Center, said his family-run greenhouse is one of the only in the area growing poinsettias. Though the business started in 1976, Wilms said, the family introduced poinsettias about 10 years ago, overseeing between 5,000 and 6,000 plants annually.

“We get them brought in as babies in July and plant them,” Wilms said. “They stay in the greenhouse and in summertime, they’ve got to be cooled. From the time they’re planted until mid-September, they’re kept under a shade cloth the entire summer because they can’t take any kind of extra light. Any kind of light will change the color and it messes up their cycle. Then on Sept. 15, we take the shade cloth off and usually by mid-October, they start to change.”

What is commonly considered the plant’s flower, Wilms noted, is actually a leaf or bract, and the coloration process is similar to fall foliage.

“We keep them watered and you have to monitor the crop daily,” Wilms said, noting that hand-watering requires about three hours daily. “Everything has to be kept at a certain moisture and you don’t want them too wet or too dry. They can be very finicky and they’re a very difficult crop to raise, that’s why a lot of people don’t raise them, but once you learn how, it’s pretty easy.”

Schaefer said he’s seen poinsettia-growing techniques change in his time at the greenhouse.

“It used to be much more of an art than it is today, because the flowers lasted such a short time, so you had to get them in bloom at the right time,” he said. “They used to grow tall and now we have growth regulators that make them short and bushy like people like. If you didn’t, you’d have to pinch them to make them branch. And most varieties are relatively new — the ones they’re growing now, I didn’t used to grow.”

“We grow three different sizes and once the shade cloth comes off, we pinch the whole crop,” he said. “We go through (the greenhouse) for about two hours and take the tops off the plants, then they shoot the side branches out.”

The University of Illinois site notes that, in its native Mexico, if left alone, the poinsettia shrub will grow to 10 to 15 feet.

“They’ll last until you’re tired of looking at them,” Schaefer said, noting that between 60- and 70-degrees Fahrenheit is a good indoor temperature for poinsettias.

“They’ll last forever and turn into a tree if you let them,” Wilms said, “but they will lose their color toward March.” Mount Vision Garden Center carries traditional red, white and pink varieties, though also offers specialty hybridized plants such as the white-speckled, red-leaved “jingle bells” variety, the pink-and-white “marble” poinsettia, burgundy blooms and the double-flowered “winter rose” variety.

“Over the years, the breeders have developed so many colors and every year, they’re coming out with something,” Wilms said. “Every year, a different color is more popular, but red is the staple and the majority of what we grow is red.”

According to Poinsettia Pages, there are more than 100 poinsettia varieties.

Wilms recommends treating poinsettias “like any other houseplant,” with once-weekly watering and situation in a sunny spot.

“It’s all in how you take care of them,” he said. “Some people take them home, and they last a week, but they’re very easy to take care of. The main thing that people do is overwater them when they’re in the house. Or when they come with a pretty pot cover, that will kill them, because then the water can’t drain out.”

Wilms said the garden center enjoys a “good response” from buyers each season.

“People know we grow our own and they like to come out and support us,” he said. “Some people just like to come to the greenhouse to look, because it’s impressive.” Mount Vision Garden Center, Wilms noted, supplies “a lot of churches” and shoppers from the Oneonta and Cooperstown areas.

“It’s just a crop for winter, because otherwise the greenhouse would be empty,” he said. “We sell the wreaths and trees and all that stuff, so this goes hand in hand, but we started with just poinsettias.”

Mount Vision Garden Center, at 101 Bloodmills Road in Mount Vision, is open from 10 a.m. to 5 p.m. daily through the holiday season. The greenhouses are at 125 County Highway 46.