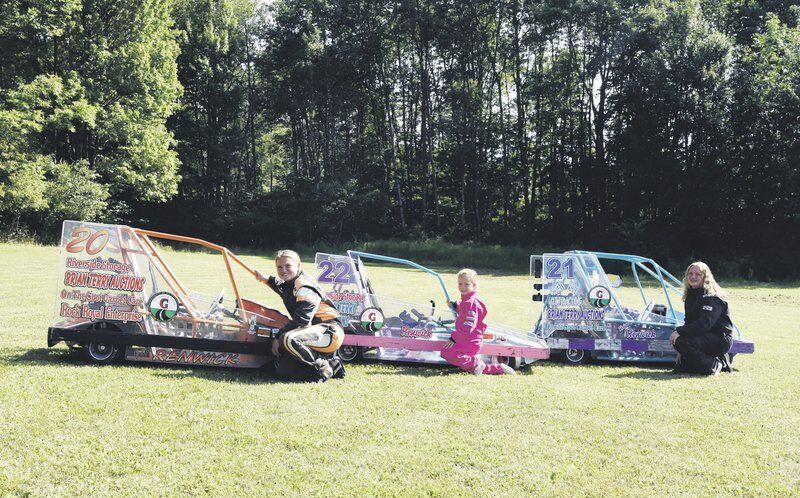 ContributedRacing sisters Julia, Vanessa and Alaina Renwick, of Unadilla, pose with their microds in this undated photo. 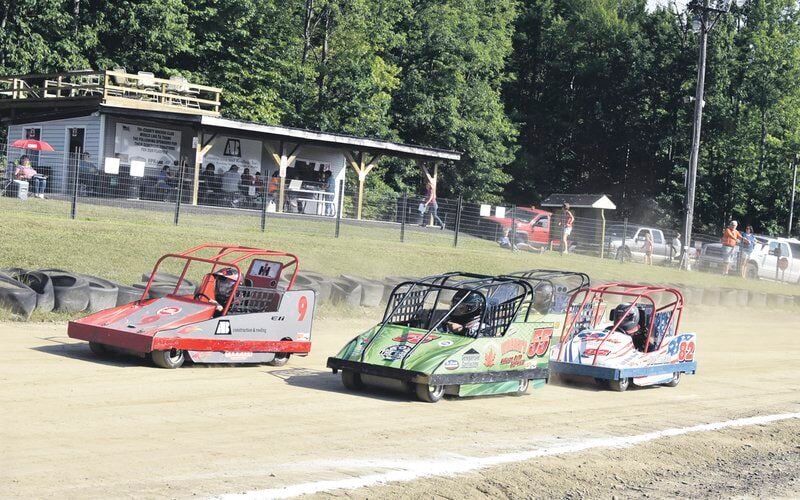 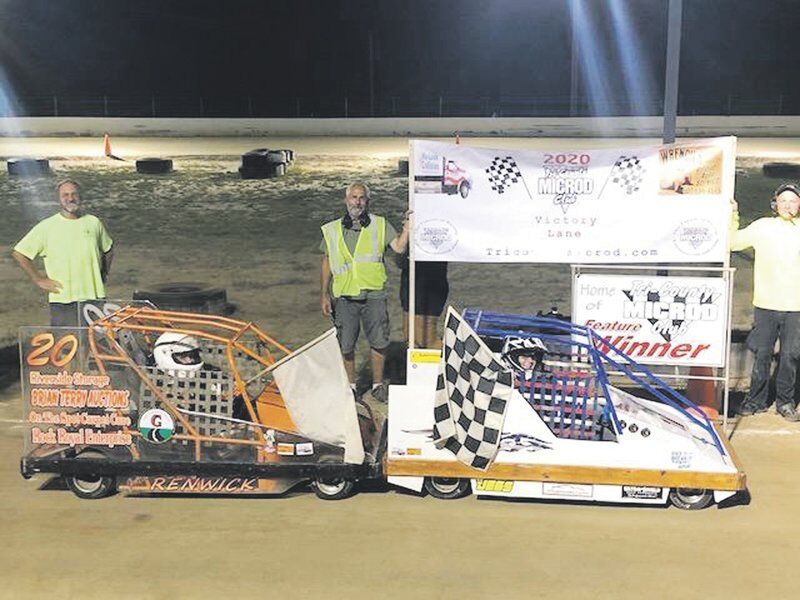 ContributedRacing sisters Julia, Vanessa and Alaina Renwick, of Unadilla, pose with their microds in this undated photo.

At the Tri-County Microd Club in Whitney Point, racing is child’s play.

The club, started in 1993 at 450 Bull Creek Road, provides an alcohol- and drug-free environment for microd racers age 5 to 18. Microds, tricountymicrod.com says, are micro hot rods powered by a one-cylinder 4- or 6.5-horsepower Honda motor.

Club president and Glen Aubrey resident Christopher Slack has been involved for years.

“I knew about it growing up, but I never raced,” he said. “But the founder, Randy Frost, asked me to help out flagging, so I flagged up there for years before my kids got involved. (Frost) is still a huge part of it; it’s his property and he leases it to the club for $1 a year. He’s the one that asked me to run for president the first time and … he’s so knowledgeable. If I didn’t have his help, I wouldn’t be as involved as I am.”

Slack said Frost envisioned the 1/10-mile clay track and its kid-friendly focus as an alternative to the expensive, ultra-competitive racing culture found elsewhere. Admission is always free, and a season includes 10 races, with a championship event. Races take place every Saturday, May through August, with three races per class, per night. Heat races are typically eight laps, organizers said, with a 12-lap elimination race (in which no one is eliminated) and a 20-lap feature, depending on the class.

“(Frost) raced (at) another microd track that was pavement and everyone was modifying their motors … and it got to be so expensive that he didn’t like the atmosphere,” he said. “He decided one day, I’ll get the property and get people involved. He just wanted something where everyone had to run even motors, so the competition was fair for all the kids and there were no other dirt (tracks) around.”

“Randy Frost, whose kids raced, got tired of where he was racing,” club board member Rodney Renwick said. “So, he took a hayfield and made a racetrack roughly 25 years ago. It’s unique, because all other mircrod tracks are pavement … and it’s a very family atmosphere.

“I think there are four or five (other tracks) across the state, but a microd is very unique to New York state; there are none of them outside of the area,” Renwick, of Unadilla, continued. “And I would say the family atmosphere is more unique than anywhere we’ve raced. They really promote the family and helping the other racers. It’s a good place: you bring a lawn chair — there are no bleachers — and it’s wide-open grass and the kids can run and play, so it’s a very nice facility to take kids to.”

“It’s all club run, so nobody gets paid for their efforts,” Renwick said. “It’s relatively, in racing terms, very inexpensive. I’d say the yearly cost for registration and everything is roughly $300.”

Such distinctions, Slack and Renwick said, give the Tri-County Microd Club broad appeal.

“We’ve got one kid coming up from Susquehanna, Pennsylvania; some from Morris, Waverly and up toward Cortland; some from Walton,” Renwick said. “Some of us are traveling an hour or maybe more. The demographic is generally families that have raced in other sports and it’s primarily boys that race, but there are quite a few girls that do.”

“Last year, numbers were down (because of the COVID-19 pandemic),” Slack said. “But probably on a given (non-pandemic) week, there’s over 100 spectators, besides what you have in the pits and stuff. We get (racers) from probably 60 or 70 miles.”

In a typical year, Slack said, there are around 40 registered racers.

Renwick and Slack said racers respond to the club’s blend of formalities and fun.

“They realize there are rules,” Slack said. “We’re pretty strict on our rules, as far as what we expect out of them on the track, and we keep driving those into them all season long. Things like signaling to the driver behind them when headed to the pits or wearing long sleeves and protective gear. There’s the safety aspect of it before they ever come onto the track.”

“The way we do it really teaches sportsmanship,” Slack continued. “We ask them not to be boastful when they win or not to be sore losers when they lose, and you can see that in them. They race, they have fun and you don’t see them stomping away mad at what happened. You go to a regular track and there’s always going to be some kind of arguing after the races about this or that … but our kids could be bumping and banging around on the track and, five minutes later, they’re playing with each other and the person who beat them is the person they’re playing with. It’s really good, and somewhere they can have fun and still take away from it that they’re learning something.”

“Sportsmanship is huge,” Renwick echoed. “And disappointment; you can’t win every week and you may have a bad week or a bad call, but you have to learn how to deal with it. The other factor is friends outside of the norm and the mechanical side of things, working on the cars.”

Each racer, Renwick said, owns his or her own microd.

Julia Renwick, Rodney Renwick’s 15-year-old daughter, has raced microds since 2015. Julia is joined on the track by sisters Alaina, 13, and Vanessa, 7.

Julia, who has won four of the club’s championships and races in its fastest class (her track record is 28 miles per hour), said she has benefited from the club’s unswerving emphasis on positivity.

“It’s really great,” she said. “We went to the track that first week and everyone was welcoming and helpful and I’ve made a lot of friends along the way. I have a couple of good guy friends and it’s always great, especially with the younger girls, to come off the track and get a bunch of fist bumps.”

Alaina Renwick, who will start her fourth racing season this summer, said she caught the bug two years after Julia.

“At first, I was kind of scared,” she said. “Then Dad finally put me in a car and I just knew that I wanted to race.”

Though the 2020 season was delayed by two weeks because of the pandemic and included several spectator-less events, Julia said, racing offered a welcome reprieve.

“I loved the fact that I got to get away from the pandemic for a bit and just have fun,” she said.

While club officials said they’re uncertain how the pandemic will affect the 2021 season, they expect flags to fly.

“We’re going to race, however we can. We’re discussing it currently,” Renwick said. “One of our biggest hurdles is funds. We do run a small food shack but, without people there, you don’t sell any hamburgers and hotdogs. I would say we’ll see a decrease in sponsorships, just because of businesses not being able to (contribute), but we do have a good core group of sponsors; some have been with (the club) for 10-plus years.”

“We would not operate without our sponsors,” Slack said. “There are sponsors that have been here right from the time it started. Last year, we didn’t know how it was going to turn out with COVID, so we pushed our season back … and still managed to get all our races in and it gave (racers) something to do when they didn’t have anything else.

“Numbers were down; I think we had 35 cars registered,” he continued. “But I think our numbers are going to come back, because they’ve seen we were able to do it … and still work cautiously. There’s a big area where spectators are and they all sat with their individual families and we just did our protocols and, knock on wood, did not have any issues.”