ContributedSusquehanna SPCA volunteer and Oneonta resident Katrina Crandell features adoptable shelter dogs at the Oneonta YMCA each weekend, as part of a program she helped establish. 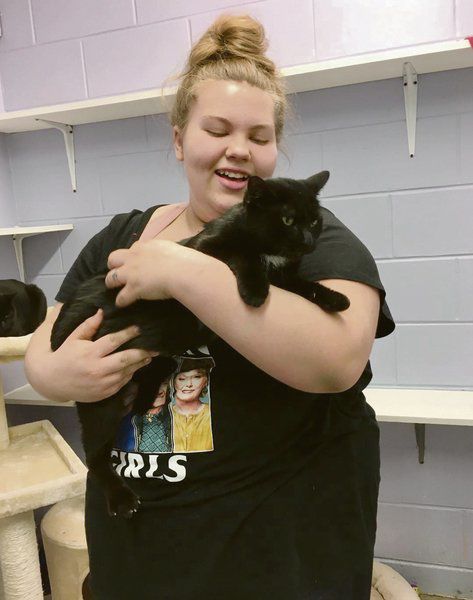 Allison CollinsHailey Hoag, a DVHS volunteer since December, snuggles a resident of the cat room at the Sidney shelter. 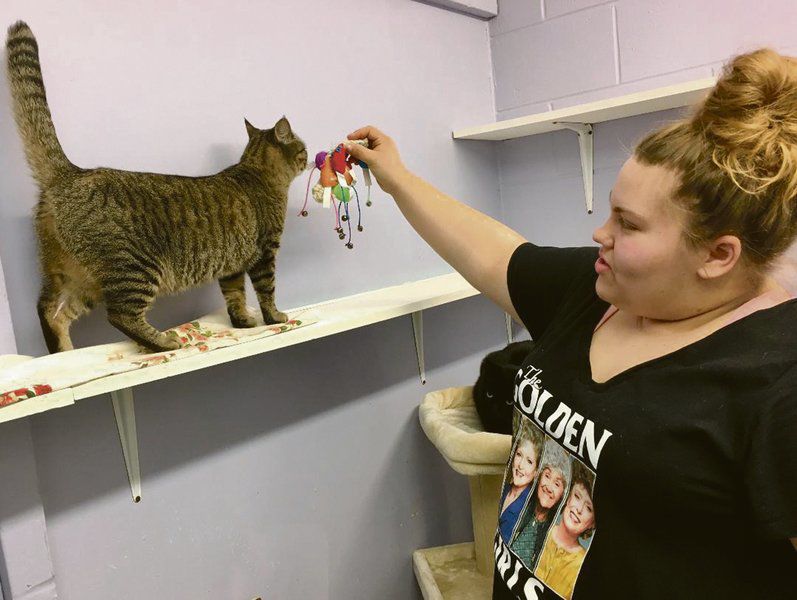 ContributedSusquehanna SPCA volunteer and Oneonta resident Katrina Crandell features adoptable shelter dogs at the Oneonta YMCA each weekend, as part of a program she helped establish.

Allison CollinsHailey Hoag, a DVHS volunteer since December, snuggles a resident of the cat room at the Sidney shelter.

Terra Butler, director of Super Heroes in Ripped Jeans in Oneonta, established in 2017, said finding funding and manpower are chief among concerns. SHIRJ is at 697 Winney Hill Road.

“We had an evaluation done by Cornell and they said we should have 12 to 15 full-time staff members for the amount of animals that we have,” she said. “We have one full-time staff person, myself, and two part-time staff ... and I frequently put in 50 to 70 hours a week.

“People don’t realize that the shelter world is not that much different than a hospital: just because it’s a holiday, we don’t get to not come in,” she said. “Everyone still needs to be fed and medicated, every single day.”

“If you have less than five years of financials or you don’t own your facility, it’s extremely hard to get grants,” she said. “We’re in the process of trying to buy our facility and approaching two years of financials … so we run off donations from the public and fundraising and that’s it. We have to work very hard to be able to maintain our expenses.”

Butler said rent, utilities and vet bills are the shelter’s primary expenses, but noted that, because SHIRJ often works with special needs cases, there are frequent emergency surgeries, too. Adoption is $60 for a cat and $100 for a dog, she said, though each animal requires about $500 of care, which includes vaccines, spaying and neutering, microchipping, flea and deworming treatments and applicable medications. Last year, Butler said, SHIRJ took in 423 animals, mostly cats and dogs, and adopted out 352. On average, she said, the shelter houses “about 100” animals.

Directors of larger shelters said the financial struggle is pervasive.

“Vetting is a huge expense, and that’s just providing the animals with basic care, let alone anything above and beyond,” Erin Insinga, director of the Delaware Valley Humane Society at 17420 county Route 23 in Sidney, said. DVHS maintains a staff of six part-time employees, with about  35 volunteers. The shelter, established in 1965, typically houses about 50 cats and 10 dogs, Insinga said, with 115 of 2019’s 140 cats adopted.

“If there are repairs to be made (to the building), you have to come up with the funding, so it’s constant,” she said. “This is an old building and it serves its function beautifully, but there is maintenance that comes with that … and that’s something people don’t think about.

“One of the biggest challenges I face is trying to keep up with the standards that you have to comply with,” she said. “We are inspected twice a year by Ag and Market inspectors and if we do not pass, the animals suffer, so it’s really imperative that we are always in code, using the proper cleaning supplies and equipment and keeping the fencing and pavement intact.”

“Our biggest expense is payroll,” said Stacie Haynes, director of the Susquehanna SPCA at 4841 state Highway 28 in Hyde Park outside of Cooperstown. “We have humans in the shelter taking care of animals 24/7, 365, and that’s vitally important. A lot of times when people make charitable contributions, they want it to go directly to the animal and they don’t want to pay for overhead, but in an animal shelter … without paying for the people who take care of animals, the animals don’t get taken care of.

“And having a physical space means we have to have heat, air conditioning and ventilation,” Haynes said, noting that construction of a new SPCA facility will begin this spring, with completion anticipated by November. “Our other largest expense is medication; all our animals are vaccinated, spayed and neutered and often, if an animal comes in sick or injured, we have vet costs and we have a full-time vet tech at the shelter. These are all things that are really important and that cost money to have done properly.”

Last year, Haynes said, the SPCA cared for “over 800 animals,” including a few pigs and goats, but mostly cats and dogs.

“I’ve been at the shelter for four years,” she said, “and when I first got there, we’d average 350 animals annually.”

“That pulls in a little,” she said, “but our mission is not to make money, it’s to take care of animals, so we operate on a deficit and make up for it in other ways.”

The Susquehanna SPCA employees about 15 people, with two more at its thrift shop, Haynes said, and has about 200 volunteers “from all over the county.” The shelter’s 2020 budget she said, is over $800,000.

“Most of our budget comes from the generosity of individuals in the community and we are very fortunate,” she said, noting that the thrift store generates about $100,000 each year. “We get very little grant funding for annual operations and it’s very hard to rely on grants for operating.”

Shelter directors said, whether working with a handful or hundreds, volunteers are integral.

“We absolutely could not do what we do without volunteers,” Haynes said. “Staff members don’t always have the time to do enrichment — that might be taking a dog for a walk or playing fetch — so the volunteers come in and provide that extra bit of support and it’s incredible. These people have the biggest hearts.”

The SPCA, Haynes said, hosts monthly volunteer orientations. She encouraged prospective volunteers to stop in, call the shelter at 607-547-8111, email info@thesas.org or find “Susquehanna SPCA” on Facebook for upcoming orientations.

Oneonta resident Katrina Crandell, 55, said, after seeing an orientation publicized on Facebook, she’s been volunteering at the SPCA since June 2018.

“I’ve always had a love for helping animals, so I thought this was a good way to act on that,” she said.

“My main thing is focusing on the dogs,” Crandell said. “Sometimes, I’ll walk six or seven dogs in a day, for 15 or 20 minutes each. I also like to take the dogs to different events (such as) an event we have every Saturday at the YMCA in Oneonta. I got that started and I’m pretty proud of that.”

Crandell, a teacher, said when school is in session, she volunteers each weekend.

“I try to get there whenever I can,” she said, “and during the summer I’m pretty much there five days a week.”

SHIRJ offers volunteer orientations “a few times a year,” Butler said, but said new volunteers “can just show up, fill out an application and get started or schedule a time to get started.”

“We have about six part-time volunteers come in each week,” Butler said, noting that SHIRJ has about 25 volunteers. “We are overburdened, for sure, and we definitely always need more help.

“We focus on recruiting people to help with the basics — getting everyone cleaned, fed and medicated; cleaning the cat room, the cages and the dog kennels; and doing dishes and laundry (because) there are hours of dishes to be done every day,” she said.

Similarly, Insinga said, DVHS volunteers go through a 30-minute orientation and sign a waiver before helping with various duties. For information, find “Delaware Valley Humane Society” on Facebook or call 607-563-7780.

“It really depends on the individual volunteer,” Insinga said, “but they’re walking dogs, they’ll brush the cats and do socialization and we have some volunteers that love doing maintenance work on the grounds or mowing the lawn.”

“I sweep the floors and mop, stock the shelves, tend to the cats and clean cages and feed the animals,” 17-year-old DVHS volunteer and Unadilla resident Hailey Hoag, who began in December, said. “I’m here every day for about three hours and I want to start coming on weekends. I’ve always had a passion for animals and I just really enjoy spending time with the animals and having a responsibility.”

For directors and volunteers, the hard work is worth it.

“As stressful as it can be, I can’t imagine doing something else,” Butler said. “There can be a lot of heartbreak and some days it doesn’t feel worth it, but for that longtime behaviorally challenged dog that gets to go home … or that cat that came in near death that is now doing so well with its family, it’s such a rewarding job.”

“While we’re proud of the care we provide, the more we can lessen (animals’) time here, the better,” Haynes said. “When you find that perfect match and an animal gets to leave, they know, and it’s the greatest.”

“It’s heartwarming to be embraced by our community and to see the amount of animals that stay in their (adoptive) homes,” Insinga echoed. “That’s one of the things I’m most proud of.”

“I hear people say they could never volunteer, because it’s too heartbreaking,” Crandell said, “but all the good you’re doing really outweighs anything else.”