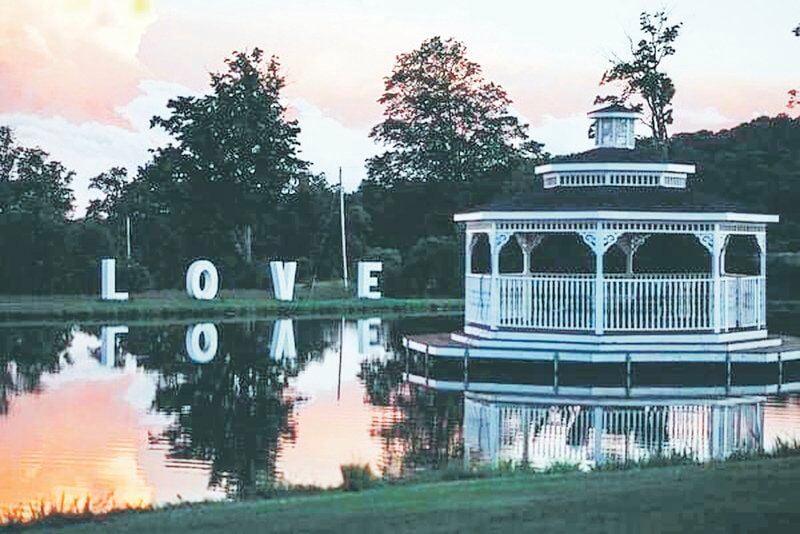 ContributedThe grounds of Gilbertsville Farmhouse, a wedding venue in Gilbertsville, are shown in this undated photo. 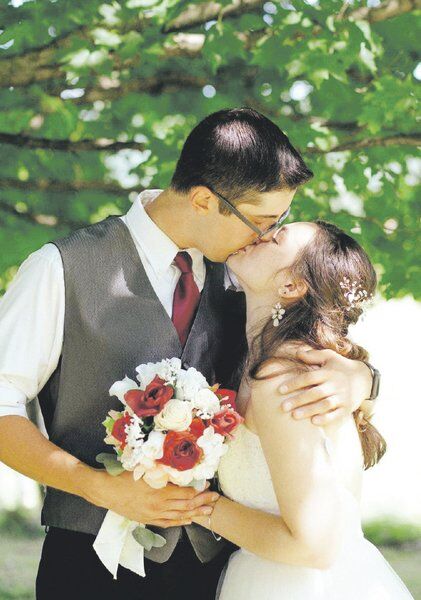 ContributedStephen and Marisa DeForest of Otego are shown on their July 18 wedding day. 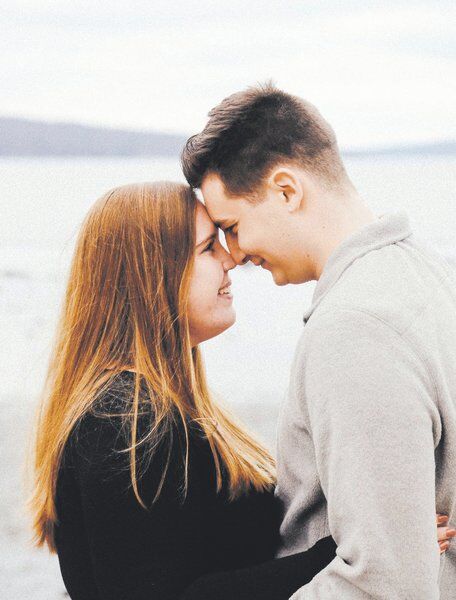 ContributedMackenzie Emerson and Zachary Youngs, pictured after their March 2019 engagement, plan to marry in October. 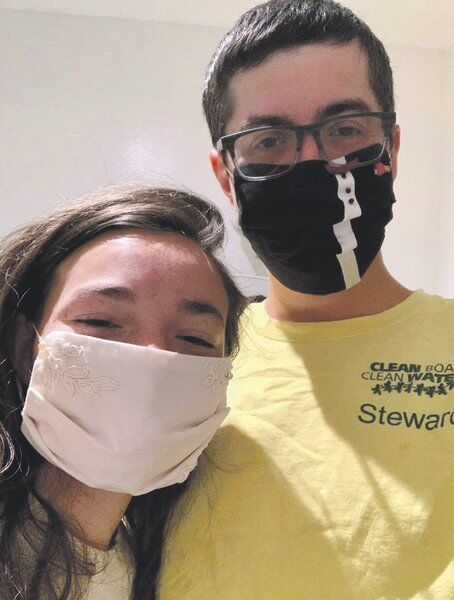 ContributedStephen and Marisa DeForest model their custom wedding-themed masks in this August photo.

ContributedThe grounds of Gilbertsville Farmhouse, a wedding venue in Gilbertsville, are shown in this undated photo.

ContributedStephen and Marisa DeForest of Otego are shown on their July 18 wedding day.

ContributedMackenzie Emerson and Zachary Youngs, pictured after their March 2019 engagement, plan to marry in October.

ContributedStephen and Marisa DeForest model their custom wedding-themed masks in this August photo.

Mixed masking messages, venue-to-venue variances and families full of opposing opinions have made tying the knot during the pandemic caused by COVID-19 a little knotty.

Couples engaged before the pandemic must decide whether or not (and how) to go ahead with nuptials, scale down or postpone.

Otego newlyweds Stephen and Marisa DeForest, 22 and 20, said, though they kept their July 18 wedding date, plans changed along the way.

“Because we’d been dating for six years … and we were engaged since March of last year, we decided that we weren’t going to let anything stop us from at least being married,” Marisa said.

Instead of what they’d envisioned, Marisa and Stephen said, they were married in a simplified ceremony with 35 guests, followed by a socially distanced outdoor reception. The wedding, they said, was livestreamed by their DJ for those unable to attend.

Stephen named “decorating, figuring out seating and trying to figure out how to have people seated six feet apart but not buy 35 tables” as the most challenging aspects of their wedding.

“We started with about 120 anticipated guests before COVID, and we had our venue at the Oneonta Country Club,” Marisa said. “We waited and waited and made what feels like five different lists, with all of the possibilities of if it had to be at home, what that would look like, or if it had to be 10 people or 20 or 50.

“Then we were told churches could operate at 25% capacity and, for our church … that allowed us to have about 35 people,” she said. “We blocked off every other pew at the church, we made masks for everybody, we bought lots of little hand sanitizers as favors and … we had a letter asking everyone to social distance and have masks on as much as they could. It all went really smoothly and we’re happy.”

Regarding masks, the DeForests said, they led by example, though they did remove coverings for photos.

“The whole wearing masks thing in our area is so mixed,” Marisa said. “We bought fabric to match everybody’s formal attire … and Steve and I had our own that I made; his was a tuxedo with buttons and mine had lace and pearl beads on it. All the masks were decorated, which kind of helped people feel like, ‘I can wear this’ and I know it made me feel better.”

“We had made the plans last year to get married this October,” Pollak said, “and we haven’t actually set a new date for it yet.”

“When this whole pandemic happened, obviously we were thinking ahead, wondering what’s going to happen in October,” Burley said. “It’s so hard to gauge that length of time, but by the time May rolled around, we kept hearing reports of a potential second wave. I have a lot of family from across the country and some of them are on the older side, and we wanted to be sure everyone can feel safe. I think it’s just better to err on the side of caution.”

Pollak and Burley said they hope to save the date.

“Since we don’t have a firm date for our wedding yet, we’re kind of open to a lot of different options,” Pollak said. “We’re even considering having a small courthouse wedding this year and then maybe having a party next year.”

“We’re going to get married on that day no matter what,” she said, “I’m just not quite sure what to do, people-wise. We’ll have a bunch of hand sanitizer and masks available for anybody who wants them. That was a very unexpected expense I never thought I’d have to have for my wedding, but if it makes people comfortable, it’s fine.”

The guest list, Emerson said, hasn’t been the only hurdle on the way to the aisle.

“We were originally supposed to be getting married in Burlington Flats at the Barn at Hog’s Hollow, but then, because of COVID, Zach didn’t get his usual summer job … and that cut our budget substantially,” she said. “We started looking for cheaper venues and, as of right now, we’re supposed to be getting married in Morris at the Grove of Butternut Valley … but I don’t even know if they’re going to be open.

“A month ago, our (hair-and-makeup) artist emailed me (saying) she was no longer doing any weddings because of COVID, and that she would only give me half of my deposit back,” Emerson continued. “I’ve since found a new makeup artist, but not a hairstylist.”

Input from guests, Emerson said, has also made planning tricky.

“There are some family members saying we should just plan the wedding, invite everyone and it will be fine,” she said. “Others say, ‘I don’t know, you might want to reschedule.’ We sent invites, which I regret doing already, and there was a little insert (saying), due to COVID, we’re really not sure what’s going to happen, so go to our wedding website and we’ll keep you updated.”

Having so many unknowns, Emerson said, takes a toll.

“The worst part of it all, for me, is the sense of shame I feel around it; feeling like I’m not allowed to be upset about my wedding because there are so many bigger problems in the world right now,” she said. “It’s exhausting trying to pretend like I don’t mind that the biggest day of my life is essentially being ruined.”

Sharon Boustani, owner of Gilbertsville Farmhouse, a wedding venue in Gilbertsville, said she’s feeling the pandemic’s impact on the industry.

“We do one wedding a weekend, because we’re a weekend venue, so that’s 28 weddings a season,” Boustani said. “We’re typically booked solid, and we’re having one wedding this year.

“Thankfully, we’ve only had three cancellations and everyone else has rescheduled, but it’s been tough,” she said. “A wedding has to be planned well in advance. A business can open and say, ‘OK, come on in,’ but a wedding vendor can’t do that, and nobody plans a wedding in a week.”

As a result, Boustani said, she’s expecting to host 42 weddings in the 2021 season.

“The impact in the beginning was devastating,” she said. “All of a sudden, by the end of March, the phone started ringing and didn’t stop. Everybody was like, ‘What’s going to happen? What are we going to do?’

“Once we got over that,” Boustani said, “the hardest thing is that, we’re not only suffering, ourselves and our employees, but then we’re suffering together with every single couple. You’re hearing everyone’s story, everyone’s situation and it’s stressful for everyone. You try to be as supportive as possible, but it’s tough to live through 28 couples having their wedding day altered. It’s a once-in-a-lifetime thing … it’s a huge event, it’s not that simple and it’s something you’re dreaming of your whole life and planning for years.”

The rerouting of so many expectations, local couples said, has also helped refine, and even enhance, the process.

“It felt like we spent a whole year planning this one wedding, and all of a sudden we were planning a second one,” Marisa said. “We talked about eloping, because we were both just done and it got a lot more complicated, but in the end, it was beautiful and honestly ended up better.

“We were able to actually greet everybody,” she said. “We were exhausted, we did all our own setup and it was pretty crazy, but we felt like we knew who was there and … it was more intimate and more meaningful.”

“You always hear planning a wedding is incredibly stressful, and it came to a point where it was overwhelming for me,” she said. “But when we got to the point of postponing, I thought, ‘This is great, I have more time for planning the decorations and activities,’ so in a strange way, it’s been kind of nice.”

For Emerson, the hiccups have distilled her reasons for marrying.

“I really do know, at the end of the day, that as long as I just get to marry Zach, that’s all I actually care about,” she said. “It’s put into perspective how the other, superficial stuff doesn’t matter. Even if we potentially postpone, we both definitely agree that, no matter what, we want to get married on that day … so we understand what it’s supposed to be about.”