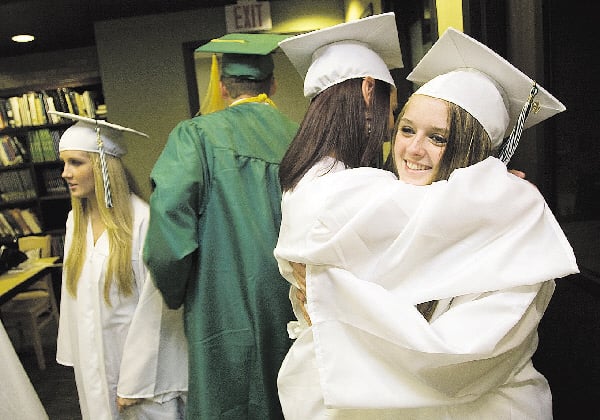 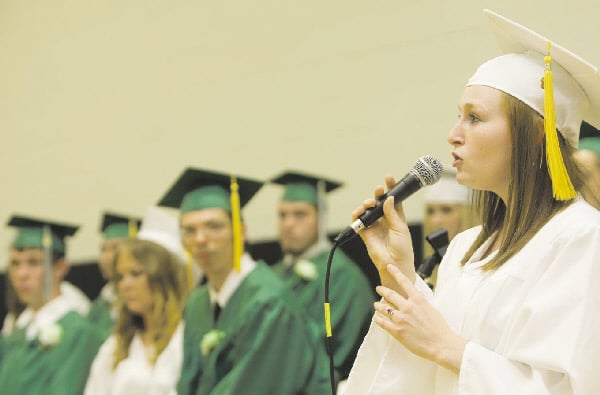 Benjamin Patton | The Daily StarWorcester Central School senior Ashley Doroski sings "For Good" as a reflection for her classmates during her class's graduation ceremony on Sunday, June 24, 2012.Benjamin Patton

Benjamin Patton | The Daily StarWorcester Central School senior Ashley Doroski sings "For Good" as a reflection for her classmates during her class's graduation ceremony on Sunday, June 24, 2012.Benjamin Patton

The past and future met at high school graduation ceremonies locally this weekend.

"Most of us are excited to be more independent," Morris Central School valedictorian Charlotte Rozanski, 17, said Sunday after Friday's graduation with about 25 other students.

Classes were small, they said, but graduates have been prepared to enter a changing and diverse world.

The future for students includes a mix of college enrollment, jobs and military service.

Rozanski of Mount Vision said her address to classmates, parents, teachers and administrators reflected on favorite memories and friendships. But the significance of the hour struck, she said, when she and classmates marched into the gymnasium.

"It finally kind of hit me that I'm graduating," said Rozanski, who is headed for the State University College of Environmental Science and Forestry in Syracuse.

At Morris, students were able to develop as individuals and learn how to "meet new people," she said.

With state-implemented changes since the class of 2012 first enrolled, students have been exposed to assessment that has helped shaped them, she said.

The OHS class of 2012 challenges the status quo and seeks change, Osborn said, factors that will lead to a "bright future."

"They have the skills, the knowledge and the desire to address change," Osborn said. "More importantly, they know how to apply those skills and knowledge -- that's going to be key."

"The skills we learned at Unatego will help make us stronger people so that we can make a better world," said Nelson of Otego.

Current issues facing the graduating generation include developing alternative energy resources, he said, and working on behalf of human rights.

At Unatego's graduation Friday night, about 75 students graduated, said Nelson, who plans to study physics at the State University College at Geneseo.

Morgan Clark, 17, of Worcester, plans to study at the State University College at Potsdam next year. But the reality of finishing high school wasn't clear until she heard the strains of "Pomp and Circumstance" at graduation in the gymnasium Sunday.

"I know I'm going to miss my teachers," said Clark, who was among 20 seniors at Worcester Central School. As a small school, Worcester offered students opportunities to be involved in many activities, said Clark, student council president, and to develop as individuals.

"There is something to be said about the boundless level of support you receive in a true small town and close-knit school district," Seward said, according to a copy of his speech. Coaches, friends, parents, community members and classmates form a support system, he said.

"Each group has its own way of applauding you in your successes, consoling you in your setbacks and cultivating your personalities," said Seward, a 1973 graduate of Hartwick College in Oneonta and a student teacher at Laurens Central School.

"Learning from others has never ended for me," Seward said. "It is a characteristic that you as graduating seniors will realize is essential to success in your lives."