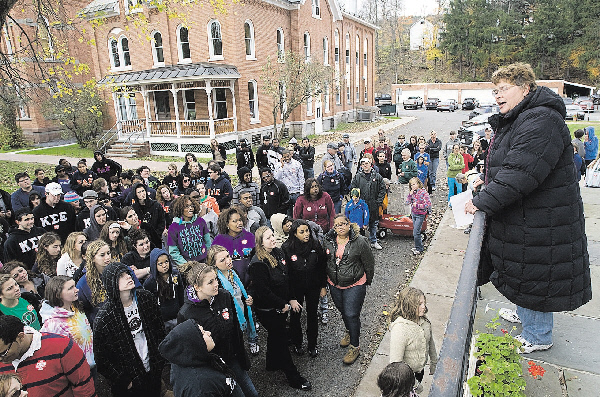 Benjamin Patton Rev. Martha Vink, pastor at the United Ministry Church in Delhi addresses walkers at the church before the start of the 2011 Delhi Crop Walk on Sunday, October 16, 2011. The six mile walk through Delhi was to raise money and awareness to fight hunger. 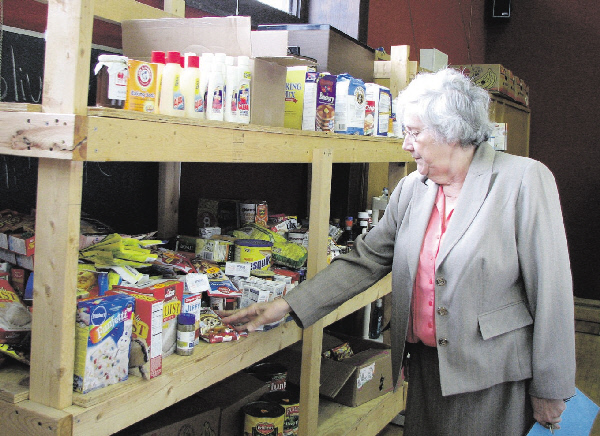 Benjamin Patton Rev. Martha Vink, pastor at the United Ministry Church in Delhi addresses walkers at the church before the start of the 2011 Delhi Crop Walk on Sunday, October 16, 2011. The six mile walk through Delhi was to raise money and awareness to fight hunger.

Demand at pantries has been rising and will continue to increase because of food costs and loss or cutbacks in employment and public assistance, workers at open house events said.

"Times are tough," Gail Norris, volunteer at St. Mary's Food Pantry in Oneonta, said Sunday afternoon. People who stop by for emergency food supplies come from "all walks of life," she said.

"The people who come in are extremely appreciative," Norris said.

The Hunger Coalition of Otsego County coordinated open houses at most of the county's 21 food pantries Sunday afternoon to highlight local resources and needs.

Fighting hunger also was the focus of a gathering in Delaware County on Sunday, when about 160 people participated in an annual fundraising CROP Walk in Delhi.

Statewide, 2.3 million residents rely on emergency food assistance annually, according to Hunger Action Network of New York State, an organization formed to end hunger and its causes, including poverty. From 2007-09, 12.4 percent of New York residents struggled with hunger, an increase from 9.4 percent between 2004 and 2006, the network said, citing U.S. Department of Agriculture data.

At St. James' Food Pantry in Oneonta, demand has increased since 2008, according to a usage report. That year, 402 households, representing 1,312 adults, children and elderly, were assisted, compared with 973 households and 3,175 members in 2010. This year, through September, 757 households with 2,456 members were assisted, ahead of a comparable period last year, the report said.

Mason said the pantry is meant to meet emergency food needs, such as when food stamps or family budgets run out of grocery money.

Two donors had stopped in by mid-afternoon, Mason said. A couple visited the St. Mary's Food Pantry, according to Norris, who said she used the quiet time to defrost two freezers.

St. Mary's Church has had a pantry for more than 30 years and helped residents throughout the county. In 2010, 1,937 households were served, representing 2,238 children, 4,052 adults and 225 elderly members, a handout about the program said. Distribution was up 15 percent last year from 2009, documents said, and assistance was up 24 percent in the first four months of this year from the same period last year.

But grants and public resources supporting the program have been cut.

The St. Mary's Pantry provides a three-day emergency food supply and a recipient may visit the pantry every 30 days.

Norris said 10 years ago, when she began volunteering, she would package six bags of food, which were distributed through the church office. Now, clients may choose items from shelves in a room in the parish center.

On Saturday in Oneonta, a "Pumpkins in the Park" event will raise money for the St. Mary's Food Pantry. The event in Wilber Park will feature a Halloween pet parade, a raffle for scarecrows, games and pumpkin decorating will be in Wilber Park from 11 a.m. to 4 p.m.

Lisa Pearce of the Otego Baptist Church Food Pantry one woman stopped by Sunday to check out the Otego church's program.

"One is better than none," Pearce said. And the visitor, who found out about the open house through The Daily Star, donated pasta, spaghetti sauce and $50 and offered to volunteer, Pearce said.

Pearce said the food pantry serves six or seven families a month but that number will rise toward the Thanksgiving and Christmas holidays. Families in need come from Unadilla, Oneonta, Otego and other nearby communities, she said, and items in high demand are bread, hot dogs and toilet paper.

In Delhi, the United Ministry of Delhi presented a CROP Walk.

From the local event, sponsored by Church World Service, 25 percent of money raised is returned to Delaware County, and the remainder is used to fight hunger worldwide. This year, local communities hit by recent hurricane and tropical storms have received aid from Church World Service, organizers said.

Last year, the walk raised more than $1,000 for the Delaware County Food Bank, the Rev. Martha E. Vink of the United Ministry said Sunday, and the poor economy and flooding damages have increased the need for funding.

Edith Campbell, a church member from Delhi who has organized the walk since 1995, said about 160 walkers, including more than 100 from the State University College of Technology at Delhi, participated Sunday. About $4,900 was pledged, she said.

SUNY Delhi walkers also contributed canned food that went into the soup made for participants, she said, and six bags of cans remaining will be delivered to the food bank.

CHERRY VALLEY - Ivan Darvey Bosma, 63, took his own life on Jan. 25, 2022, following a long period of psychological and physical decline. Darvey was born in Oswego, on June 23, 1958. After he graduated from Canajoharie High School in 1976, he joined the U.S. Army and served as a paratrooper,…