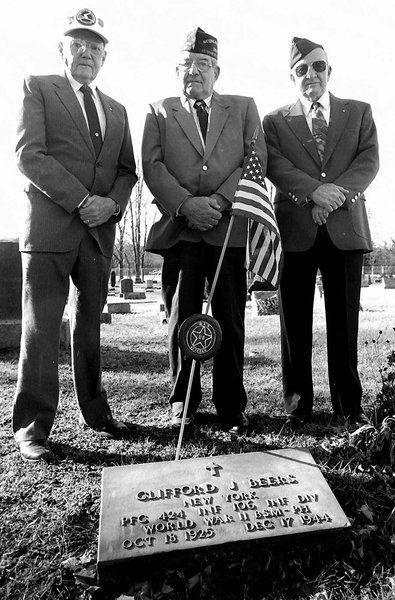 FILEBattle of the Bulge veterans are seen on Dec. 27, 1994. Landin Van Buren, Ed Keoughan and Howard Etts gather around the grave of Clifford Beers, a Davenport serviceman who was killed during the battle and is buried in Davenport Cemetery. 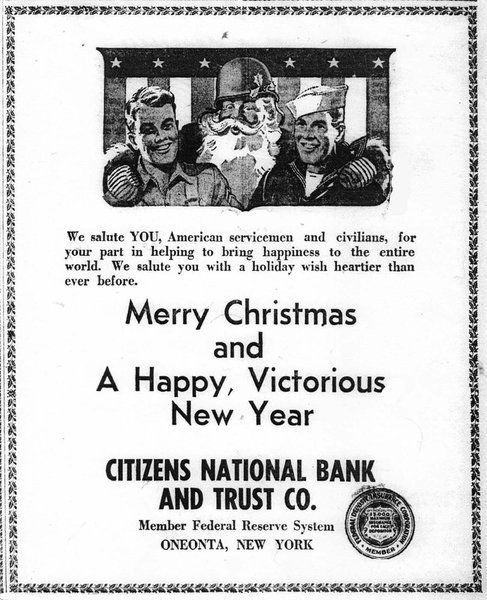 FILEThis advertisement appeared in the Dec. 22, 1944, edition of The Oneonta Star.

FILEBattle of the Bulge veterans are seen on Dec. 27, 1994. Landin Van Buren, Ed Keoughan and Howard Etts gather around the grave of Clifford Beers, a Davenport serviceman who was killed during the battle and is buried in Davenport Cemetery.

FILEThis advertisement appeared in the Dec. 22, 1944, edition of The Oneonta Star.

To use a football analogy, one might call it Adolf Hitler’s “Hail Mary” pass to the end zone with only seconds remaining in the game.

The “big game” between the Allied and Axis powers was anything but a game, but our area had a few soldiers on the field or in the air on the Western Front for the Battle of the Bulge.

As readers of The Oneonta Star of Monday, Dec. 18, found out, “The German army reinvaded Belgium and Luxembourg in an all-out offensive Sunday, denting U.S. 1st Army lines and thousands of troops and scores of tanks attacking on a 60-mile front.

“This first major counter-offensive since Normandy was gaining in intensity.

“Seizing the initiative for the first time since D-day, the Germans swept back along the paths of their 1940 conquests, spurred by an order from Field Marshal Karl Dudolf Gerd von Runstedt (sic) that ‘your hour has struck.’”

Oneonta area residents were already doing their part for the war at home, from rationing to salvaging, and buying war bonds and stamps. But with this new surge, they were asked to do something more — to be friendly and helpful.

“An outstanding opportunity to be of service to those who serve our country when a troop train stops in our city — especially when soldiers leave the train and go about Oneonta,” The Star reported on Dec. 20. “These men travel long, tiresome distances, and they will remember a city that is friendly, whose people are quick to show courtesies.

“Two young soldiers recently were grateful when told where to find a bakery. Others, with but a few minutes to spare, appreciated directions to a grocery store. Still others have been pleased with gifts of sporting magazines and newspapers.

“A friendly question, ‘Soldier, or Sailor, can I do anything for you?’ is remembered long after unhappy experiences of military life are forgotten.

“A word of warning is in order. Do not ask the men where they came from, where they are going, or the names of their outfits. Do not encourage them to talk about these matters. Friendliness, not curiosity, must be the keynote.”

While secrecy and confidentiality were crucial during Hitler’s last assault, some news of local interest did get through to the home front.

From The Star of Dec. 21 came news, “On a recent bomber escort mission to Germany, 1st Lt. Lothar Fieg, son of Mr. and Mrs. Lothar Fieg of 10 North Sixth, shot down an ME 109 while helping to disperse a large formation of enemy fighters that was attempting to attack the Flying Fortress and Liberator. His victory was one of the 23 that the 352nd Fighter group, based in England, scored that day to raise its total bag of enemy aircraft destroyed, in the air and on the ground, to more than 540.”

As the battle continued, the holidays approached and the local moods were mixed.

On Dec. 22, The Star reported, “‘Be it remembered that most of the world is at war with the arch-enemy of all that Christmas represents. He is fighting to banish peace and goodwill. The world is at war to save Christmas and everything it signifies, from a pagan power that scorns the Christ Child and persecutes His followers,’ Andrew C. Lange of the Rotary club said in his address on ‘Christmas in Wartime,’ given at the club luncheon yesterday in Wilson hotel,” once found where the parking garage is today, at the corner of Chestnut Street Extension and Market Street.

Likewise, New Year’s was subdued, as Star readers learned Jan. 2, 1945, “Oneontans greeted the new year with little festivity. The gaiety of celebrations was not quite so marked as in peacetime.

“Instead, in the hearts of many was a fervent hope for peace. The hour of midnight found many singing ‘Auld Lang Syne’ and bidding farewell to the old year, but many others prayed for their loved ones or silently offered up a toast to those far away.”

A couple of those loved ones being toasted and prayed for were at the Western Front during the holidays. They shared their stories with The Star in the Dec. 28, 1994, edition.

“Ed Keoughan still remembers Christmas dinner 50 years ago: a hard, frozen chocolate bar in the midst of the Ardennes Forest.

“Landin Van Buren does, too, a turkey dinner that was scraped from the snow and reheated after the jeep carrying it was hit by a shell. But that was a rare, warm meal.

“Keoughan, staff sergeant of Company C with the 291st Engineer Combat battalion, got word something was up on Dec. 15 with the report of German paratroopers dropping in the area. The Jefferson man was near the town of Sourbrodt, northeast of Malmedy, Belgium.

“‘We went and we searched the forests,’ he said. ‘We found some parachutes, but we didn’t find any Germans. We come to find out that they were all dressed in American uniforms, they spoke excellent English. And their job was to just upset behind the lines, change street signs and stuff like that.’

“But the Allies didn’t know that at the time.

“As Waffen SS Colonel Jochen Peipe advanced, Keoughan’s unit blew up a gas dump to thwart him, set up road blocks, lay mines, blew up bridges and built others. As a result, Peiper was later heard cursing ‘the damned engineers.’

“To the north, Landin Van Buren was near Aachen, Germany, by the Belgian border when the battle started. He and other members of the 84th Infantry Division were moved to Belgium’s city of Marche Dec. 20 and told to hold it, helping prevent the Germans’ goal of crossing the Meuse River and driving on to Antwerp. Members of rifle Company A were sometimes on the front lines.

“‘My particular battalion was assigned a hill on the outside of the city,’ the Oneonta man said. ‘We attempted to dig foxholes on that hill, but the ground was frozen and it was very difficult to dig in. And we really didn’t know where the front was.’”

Both said the worst of it was the cold and lack of hot food. Many went weeks without changing clothes, slept with boots in their sleeping bags so they wouldn’t freeze, and curled up in foxholes or anywhere they could. Some went for a month without sleeping indoors.

Keoughan, Van Buren and the Allies did their job and did it well, because Star readers of Jan. 27, 1945 learned the end of this battle was near as, “All German resistance collapsed Friday west of the Roer industrial valley and the U.S. 9th and British 2nd armies — with 35 miles of westwall behind them — seized assault positions only 25 miles from Dusseldorf.”

It took a month, a week and two days, but in late January, Hitler’s “Hail Mary” pass to the end zone was finally batted away by the Allies, out of Axis hands.

See Page 16 for more on the Battle of the Bulge