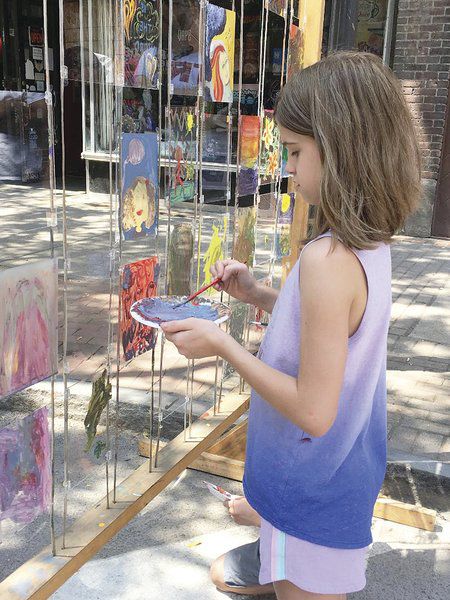 Allison Collins photos Eden Gallager, 10, of Oneonta, paints part of a window art installation during the 17th annual City of the Hills Art & Music Festival, presented by the Community Arts Network of Oneonta on Saturday. 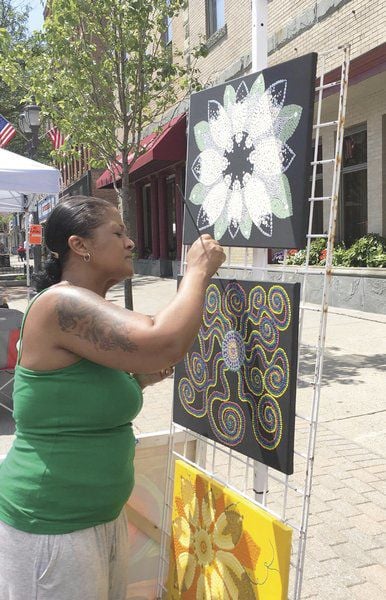 Oneonta resident and artist Lavonne Nicole, of Pruddygurl Exclusives, touches up a ‘chopstick painting’ during the 17th annual City of the Hills Art & Music Festival on Saturday. 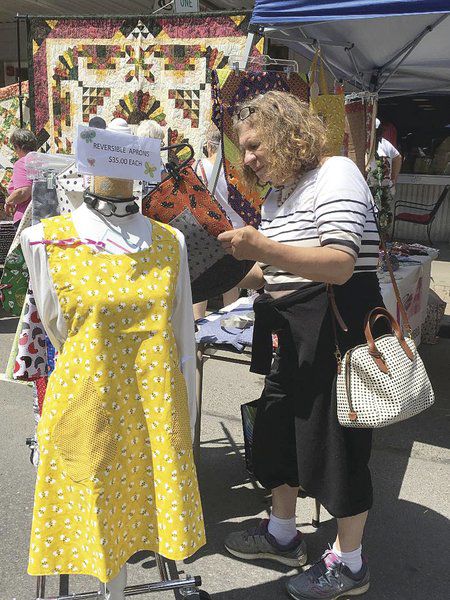 Allison Collins photos Eden Gallager, 10, of Oneonta, paints part of a window art installation during the 17th annual City of the Hills Art & Music Festival, presented by the Community Arts Network of Oneonta on Saturday.

Oneonta resident and artist Lavonne Nicole, of Pruddygurl Exclusives, touches up a ‘chopstick painting’ during the 17th annual City of the Hills Art & Music Festival on Saturday.

The Community Arts Network of Oneonta held its 17th annual City of the Hills Art & Music Festival on Saturday, with expanded offerings and an art-for-all attitude.

“Our mission is simple—to link artists, promote the arts and educate the community,” she said. “This festival allows us to reach a large audience in one day and hit each of those three points. We have tons of musicians, authors and visual artists and they all get to meet each other and collaborate, plus we’re promoting the arts just by being here and being free to the community.”

“By having artists on Main Street, we’re making it easier for people who maybe think art isn’t for them or that it’s something fancy,” Cacciola continued. “This is an easy way to learn about and see art and like something you’ve never seen or heard before. Art is accessible for all and I always hope this specific event sparks in (people) a curiosity, interest or passion for art.”

Cacciola said festival planning gets underway in January and, this year, was overseen by a five-person subcommittee of four CANO board members and one community volunteer coordinator. The grant-funded festival is one of CANO’s two largest annual events; the second is its January Chili Bowl.

“Because we’re a small organization and we’re all so busy,” she said, “we don’t often start before January and then the bulk of the work happens in March and April and the last weeks of July.”

“It’s huge, even though we had a very small committee,” she said. “God bless (committee members) for believing in the vision, because this is not easy to pull off.”

“Up until a few years ago, we just had the one main stage (in Muller Plaza),” Cacciola continued. “Last year we wanted to expand the music … because we wanted more musicians to have more opportunities, so (in 2018), we had two tents and that went really well. This year, we added a third, smaller stage so that the festival is really anchored on both ends of Main Street.”

Though Cacciola said CANO doesn’t track the number of festivalgoers, she estimated “a couple thousand” attendees.

“Everybody seems to love it,” she said. “When I walk up and down Main Street, I hear people saying, ‘This is just the greatest,’ so it is well received.”

Artists and attendees said they, too, value what the festival provides.

“It’s fabulous and I’ve already had a few sales,” she said, midday. “The CANO staff are beautiful people and I’m grateful. This is a nice atmosphere.”

Like Cacciola, Nicole said, the festival amplifies accessibility to the arts.

“I think it opens up a lot of doors to inspiration for people,” she said. “And it gets us all together as a community, hanging out and having a good day.”

“I think it’s great for the community,” Leary continued. “How nice a town this is that it offers so much. It’s really special.”

For more information or to become a volunteer, visit CANOneonta.org, call 432-2070 or find “Community Arts Network of Oneonta (CANO)” on Facebook. CANO is at 11 Ford Ave., Oneonta.