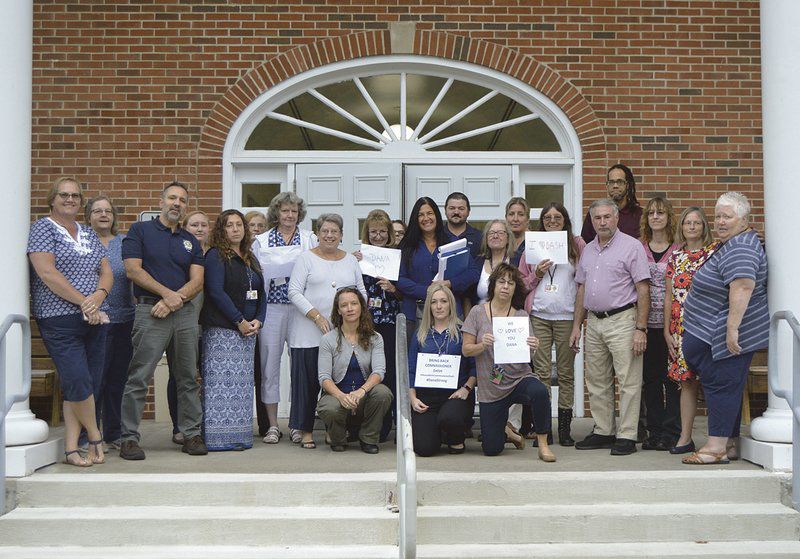 Sarah Eames | The Daily Star Dana Scuderi-Hunter, center, commissioner of the Delaware County Department of Social Services, poses with about 20 friends, family members, department employees and other supporters Tuesday in front of the Sen. Charles D. Cook County Office Building in Delhi before the start of the fourth day of disciplinary proceedings against her. 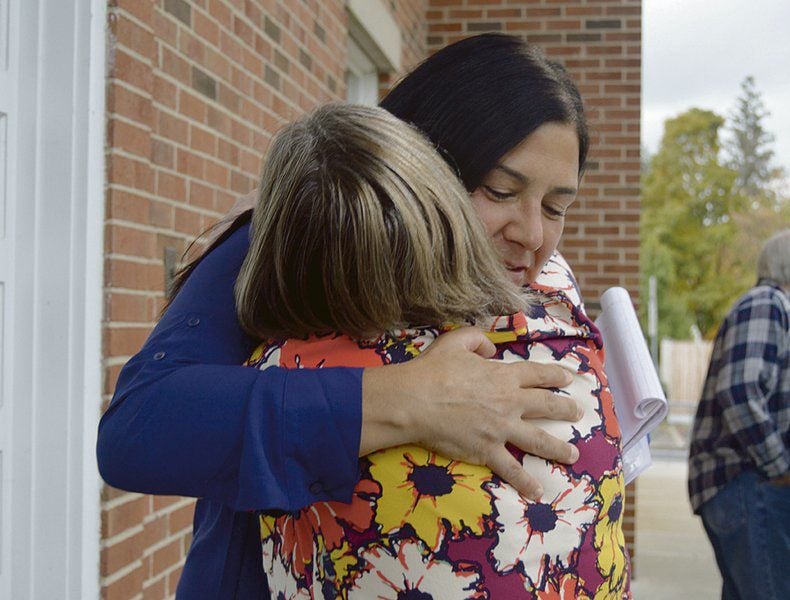 Sarah Eames | The Daily Star Dana Scuderi-Hunter, center, commissioner of the Delaware County Department of Social Services, poses with about 20 friends, family members, department employees and other supporters Tuesday in front of the Sen. Charles D. Cook County Office Building in Delhi before the start of the fourth day of disciplinary proceedings against her.

DELHI — County Attorney Amy Merklen was the sole witness to take the stand Tuesday in the fourth day of disciplinary proceedings against Dana Scuderi-Hunter, commissioner of the Delaware County Department of Social Services.

On four separate instances in her testimony, Merklen let slip the names of two of the four youths mentioned throughout the proceedings but whose identities both parties agreed to keep anonymous in the interest of privacy. Hearing officer Alfred Riccio ordered the names be stricken from the record and requested members of the audience refrain from sharing identifying information.

Dunn argued that Merklen engaged in a conflict of interest by representing the departments of both probation and social services in a May 21 family court case in which the parties issued adversarial recommendations concerning a youth referred to as Child No. 2 — probation favoring incarceration in a secure detention facility and social services advocating for placement in an inpatient drug and alcohol rehabilitation facility.

While Child No. 2 was in the legal custody of Scuderi-Hunter as commissioner, Merklen testified Tuesday that the Department of Social Services was not a party in the proceedings because the court petition was brought by the  probation department.

“The face of the county was probation,” she said. “I had on the record both the commissioner and probation saying that in fact, their interest was the best interest of the child and there was no conflict between the two.”

Merklen said she was not accused of creating a conflict of interest until Scuderi-Hunter’s June 20 letter to the county social services committee, which she directed in response to the county attorney accusing her of inappropriate conduct for taking a position contrary to that of the county in the May 21 proceeding.

“Did you regard that allegation of a conflict of interest as a serious matter?” asked prosecutor Frank Miller.

“Yes,” Merklen responded. “I’m the county attorney, but I’m a lawyer — that’s my license. I went to law school, I worked hard and I built my reputation. For people to be throwing out those accusations — it’s slanderous, it’s dangerous and it damages my reputation.”

Merklen referenced on numerous occasions testimony given Friday by Scott Glueckert, director of probation, despite the fact that she was not present for the testimony and the hearing officer had been diligent about sequestering witnesses from the testimony of others.

Echoing Glueckert’s testimony that Scuderi-Hunter conferred with the attorney for Child No. 2 — the opposing counsel in the family court proceeding — Merklen asserted that the commissioner “violated her duty of loyalty to the county” because as a county employee and department head, “she’s a represented party whether she likes it or not.”

Merklen testified that when she confronted Scuderi-Hunter and Tasha Amadon, director of services for the department, about any improper communication between the department and counsel for Child No. 2, Scuderi-Hunter denied the claim but Amadon looked uncomfortable, prompting Scuderi-Hunter to admit to some contact. Merklen said she later received a tearful phone call from Amadon, quoting her as saying “we’ve worked together a long time. You know I wouldn’t contact (Child No. 2’s) counsel unless I was directed to.”

After four and a half hours of direct examination, Dunn was left with one hour to cross-examine Merklen. He presented an affidavit signed by Scuderi-Hunter that was submitted in a permanency hearing concerning the eligibility for adoption of Child No. 4, a Delaware County child formerly in foster care whom Dunn said was the subject of Monday afternoon’s testimony.

When asked by Dunn if she recognized the document — an affidavit in opposition to a court order to comply with a psychotropic prescription ordered for Child No. 4 — Merklen said “I do, I just question how you got it.”

“We had made a request for the county to produce this document, and this was the document that was produced,” Dunn said.

Miller vigorously opposed the document’s admission as evidence but was overruled by Riccio.

Though she did not prepare the document herself, Merklen testified that she advised Scuderi-Hunter on its preparation, and as legal counsel for the department, independently investigated the claims before it was presented to the presiding judge.

Dunn elicited testimony that Scuderi-Hunter requested an appointment for the child with Suzanne d’Aversa, an Albany-based licensed clinical social worker specializing in cognitive behavioral therapy, who would then consult with Dr. Kenneth Gordon, the Oneonta-based developmental pediatrician who prescribed the Lexapro, to ensure the child’s treatment was fully-informed — a recommendation the judge ultimately sided with.

The hearing is scheduled to resume Tuesday, Oct. 8, at 9:30 a.m. and will be held either at the Delaware County Public Safety Building or the Sen. Charles D. Cook County Office Building in Delhi, to be announced at a later date. Additional dates were scheduled for Oct. 9, 21, 22 and 25.

Because Merklen officially remains on the witness stand in the interim, Riccio ordered her against discussing testimony with counsel for either side.