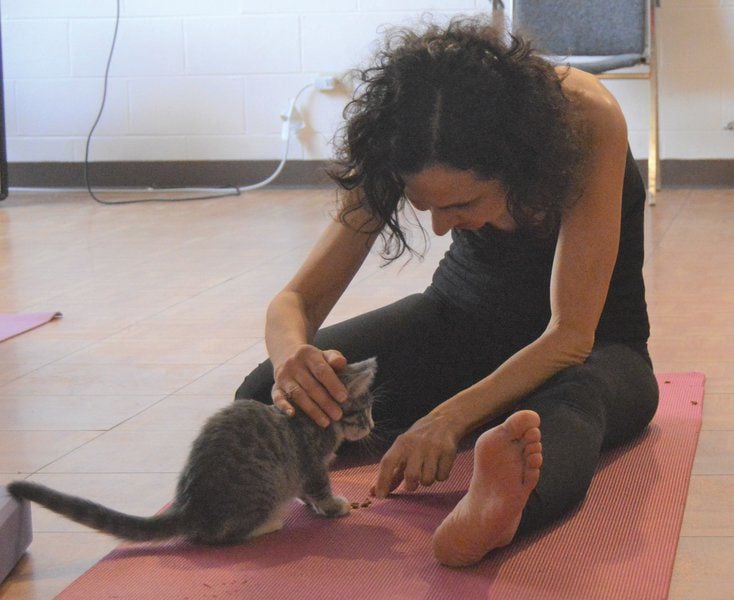 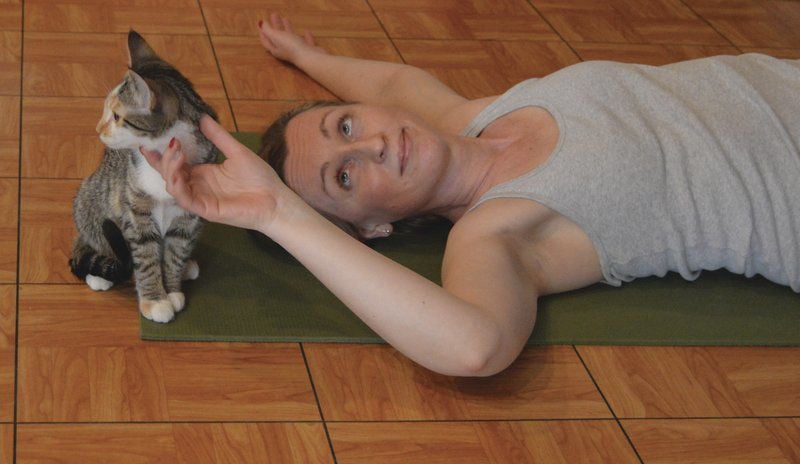 Six-month-old Peaches joins Oneonta resident Sophie Vallette on the mat Sunday during a cat yoga session at the Oneonta Family YMCA. Proceeds from the class benefit the building fund for Super Heroes in Ripped Jeans, a local animal rescue nonprofit.

Six-month-old Peaches joins Oneonta resident Sophie Vallette on the mat Sunday during a cat yoga session at the Oneonta Family YMCA. Proceeds from the class benefit the building fund for Super Heroes in Ripped Jeans, a local animal rescue nonprofit.

A yoga class at the Oneonta Family YMCA on Sunday gave new meaning to the “cat pose.”

Four cats available for adoption at Super Heroes in Ripped Jeans joined a dozen participants for two afternoon sessions of cat yoga, organized as a fundraiser for the local animal rescue nonprofit.

Shelter volunteer Steve Sisselman helped coordinate the event and escorted its feline guests. Of the dozens available for adoption, “these four were a good mix of personality,” Sisselman said.

“It was especially good to bring Ash, who can be a little scared. She got some exposure and got to be out a little bit,” he said.

A long-haired senior cat, Ash stayed hidden in her carrier at one side of the room, and Asia, a seven-month-old with mottled gray and orange hair, took refuge in a nest of rolled-up yoga mats at the opposite end.

Six-month-old Peaches, named for the pockets of soft orange in her striped gray coat, paced the perimeter of the room, meowing occasionally and nesting in various sweatshirts and other personal belongings of those in attendance.

“Just for one moment, imagine what these cats are thinking about us,” Morrissey said, leading the class in triangle pose.

Arthur, a gray and white ten-week-old tabby, vigilantly perched on the mat of one participant, unconcerned with her movements except to crawl under her torso as the poses allowed. He darted around the class to bat at dangling ponytails as Morrissey led the class in an inverted pose, planting her feet wide and stretching her fingertips to the floor.

“You never know what’s going to happen with the cats around,” Morrissey said.

Polish native Sophie Vallette said she had four cats at home but had never tried yoga with them before.

“I loved it,” she said after class.

With three cats at home, Oneonta resident Debra Marcus said she always has company for morning yoga and pilates.

“Two of them head for the mat as soon as I roll it out,” she said.

The shelter must raise $300,000 to purchase the Winney Hill Road property it occupies, according to organizers, and $75,000 is needed by July to secure the mortgage.

Upcoming events include a Tapas and Tails fundraiser March 29 and 30 at the Tulip and the Rose Café in Franklin, a meet and greet bake sale March 30 at the Houndstooth Bakery and Boutique in Sidney, and a Cause for Paws benefit concert April 6 at the Black Oak Tavern.