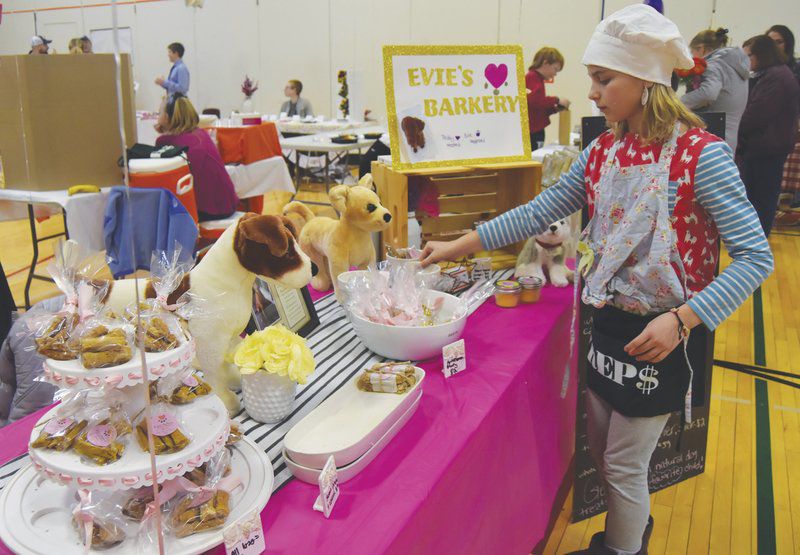 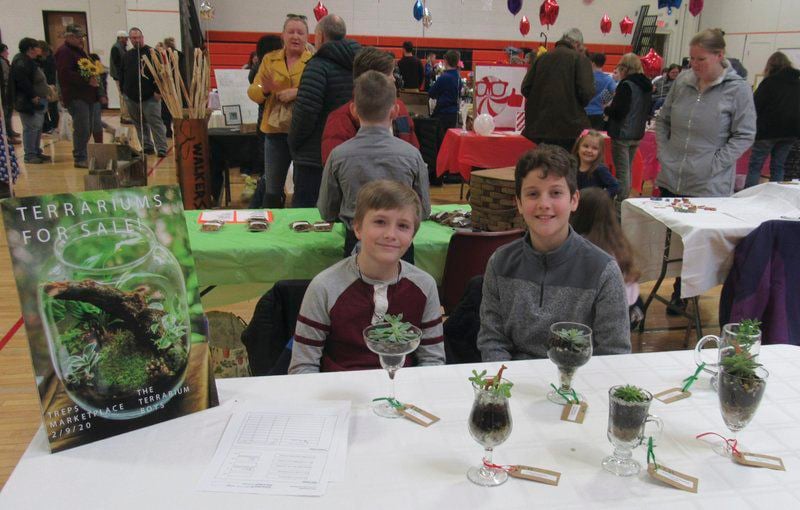 Cousins Hayden Spencer and Declan Spencer, who are in fifth and sixth grade respectively, show off the terrariums the were selling Sunday, Feb. 9, at the 11th annual Trep$ marketplace at Cooperstown Central School.

Cousins Hayden Spencer and Declan Spencer, who are in fifth and sixth grade respectively, show off the terrariums the were selling Sunday, Feb. 9, at the 11th annual Trep$ marketplace at Cooperstown Central School.

COOPERSTOWN — More than 50 students and their families packed Red Bursey Gymnasium on Sunday, Feb. 9, to sell their homemade crafts, wares and snacks at the 11th annual TREP$ marketplace.

TREP$, short for “entrepreneur,” teaches students about product development, business finance, advertising, marketing and sales in a series of seven after-school workshops, according to Katie Cole, chair of the TREP$ program.

Held in the high school gym, the flea market-style arrangement allows students to showcase their creativity and practice their marketing and advertising skills learned at the end of the session.

Cole said her son, Adam, received an offer from Barnyard Swing Miniature Golf to purchase his unsold wooden tic-tac-toe games at the end of the afternoon.

“I did TREP$ last year and was really successful, so I wanted to do it again,” she said.

Evie said she was inspired by her dog, Teddy, and found recipes on Pinterest that were “Teddy-approved,” including sweet potato and carrot treats, pumpkin peanut butter snacks and anti-inflammatory biscuits, made from turmeric, flaxseed, oats and eggs.

Eleven-year-olds Mia Stenzel and Meenu Manu, founders of M&M Soaps, said their products are made from all-natural ingredients including glycerin, essential oils and dried flowers purchased from a local farm.

Across the aisle, Alyssa Lichtman sold her “Terrific Toys,” which she described as “flexible fidget toys” 3-D printed using a corn-based filament.

“At any age, people can buy them and play with them,” she said.

Her featured creations, which include sharks, tyrannosaurus rex, geckos and unicorns, can take hours to make, Alyssa said, “but it’s worth it, I’d say.”

Students keep 100% of the proceeds they earn, Cole said. Each student donated one of their items for a raffle basket to benefit the Susquehanna SPCA.

Go to TREPSed.com for more information.