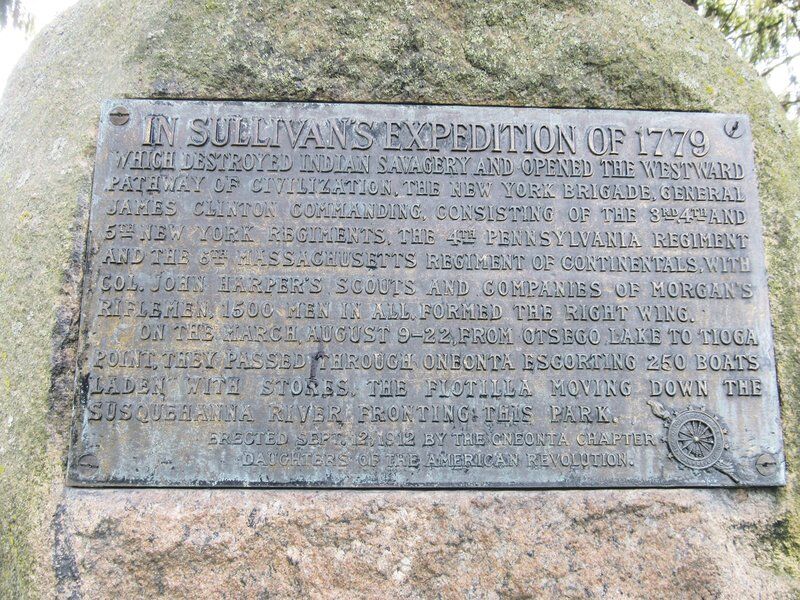 Greg Klein | The Daily StarOneonta Common Council member Luke Murphy said he wants to have a community-wide discussion about some of the language and history used on the plaque in the 1912 monument to Gen. John Sullivan's 1779 expedition, which is in the city's Neahwa Park. 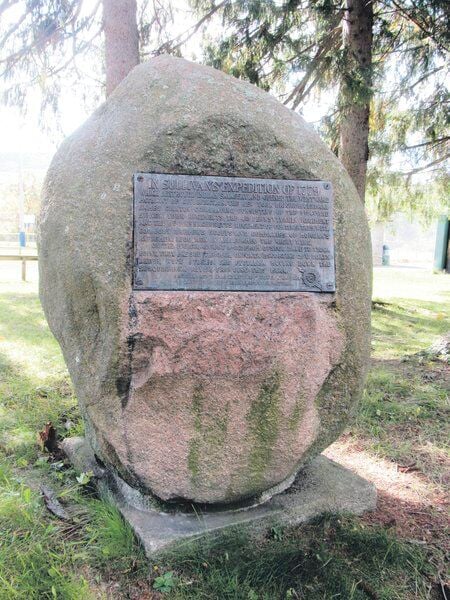 Greg Klein | The Daily StarOneonta Common Council member Luke Murphy said he wants to have a community-wide discussion about some of the language and history used on the plaque in the 1912 monument to Gen. John Sullivan's 1779 expedition, which is in the city's Neahwa Park.

An Oneonta Common Council member is seeking a discussion about a Neahwa Park plaque, calling some of the language and ideas on it racist.

Council member Luke Murphy, D-First Ward, told the council at its Tuesday, Oct. 6, meeting that he heard from a constituent who objected to the language on a plaque on a rock monument, commemorating Sullivan's Expedition of 1779.

The plaque and monument were given to the city in 1912 by the Oneonta Chapter of the Daughters of the American Revolution.

Encyclopedia.com sums up Sullivan's expedition, also known as the Sullivan-Clinton campaign for American Major Gen. John Sullivan and Brigadier Gen. James Clinton, as, "the name given to the Continental army's invasion of the Iroquois homeland, conducted between May and November 1779."

The Iroquois, also known as Haudenosaunee, who were loyal to the British were treated harshly and more than 40 native villages were destroyed by Sullivan's troops.

During the expedition, Clinton dammed the Susquehanna River and then exploded the dam, inspiring the annual Gen. Clinton Canoe Regatta, which ends at Gen. Clinton Park in Bainbridge. Clinton later helped draw the boundary between New York and Pennsylvania and served in both houses of New York's legislature. His son, DeWitt Clinton, was a U.S. senator and New York governor.

Murphy said the objection is not to the memorial or most of the language on the plaque, but to an early clause on it, which reads, "In Sullivan's expedition of 1779 which destroyed Indian savagery and opened the westward pathway of civilization ..."

Murphy said the opening clause assigns savagery to the entire native population, declares there was no western civilization before Europeans arrived in America and falsely states there are no Haudenosaunee living in the region today.

Murphy, who is the council liaison to the city's Commission on Community Relations and Human Rights also talked about the issue with that group at its most recent meeting, Thursday, Sept. 24. Both meetings were held via Zoom because of the coronavirus pandemic; they can be viewed on the YouTube channel City of Oneonta.

The subject of monuments and their language is not a new one for Murphy, who has a master's degree in museum science from the Cooperstown Graduate Program and is the education coordinator at Hanford Mills Museum in East Meredith.

"While I was in the Cooperstown Graduate Program, we talked about this happening a lot in the South," Murphy said in a follow-up phone conversation with The Daily Star on Tuesday, Oct. 13, "but this is the first time I have heard about it coming up here."

Murphy said he wants to have more conversations, including with Haudenosaunee who still live in the region, local DAR members and museum educators at the Iroquois Museum in Howes Cave before making any recommendations to the commission or the common council.

"My initial instinct was to remove the plaque, but that was a gut reaction," he said. "What I would like to do is to reach out to people on both sides ... to see how do we address this rather than just take it down."

The statue is near the River Street entrance to the park, at the western edge of a series of war monuments. Most of the monuments are memorials to American soldiers who died at war. The Sullivan plaque is a different kind of marking, Murphy said.

"In 1912, there was a tremendous amount of xenophobia," he said. "And there was an attempt to find pride in anything we had done in the past."

Murphy said he thinks it is fine to continue to commemorate the history, "but you can tell your history without trying to make an excuse for it."

Murphy said he is in no rush to force a decision on the matter and is still processing the issue himself, but he will continue to do outreach to get a full understanding of the issues and options.

"What I'd like to see is for us to have a discussion about what is going on," he said.

UNADILLA - Phyllis M. Jennings, 81, of Unadilla, passed away on Tuesday, Nov. 24, 2020. She was born on Dec. 25, 1938, in Oneonta, to Elmer and Marjorie (Bennett) Mackey. She married James Jennings on Thanksgiving Day in 1957, who predeceased her. She was a retired employee of Amphenol Corp.…

MARYLAND - Eleanor P. Hamill, 90, died early Saturday morning, Nov. 21, 2020, at home. Born on March 27, 1930, in the Bronx, Eleanor moved to Schenevus, when she was 11 years old. Eleanor was the daughter of German immigrants Henry and Marichen Pape who owned a small family dairy farm in Elk…

SCHENEVUS - Louanne was born on Jan. 17, 1958, in Johnson City. She passed away on Nov. 19, 2020, at Bassett Hospital in Cooperstown. Louanne was predeceased by her parents and many others. She is survived by her loving partner of 33 years, Danny Wayman; five children, Melissa Kinney of Oneo…