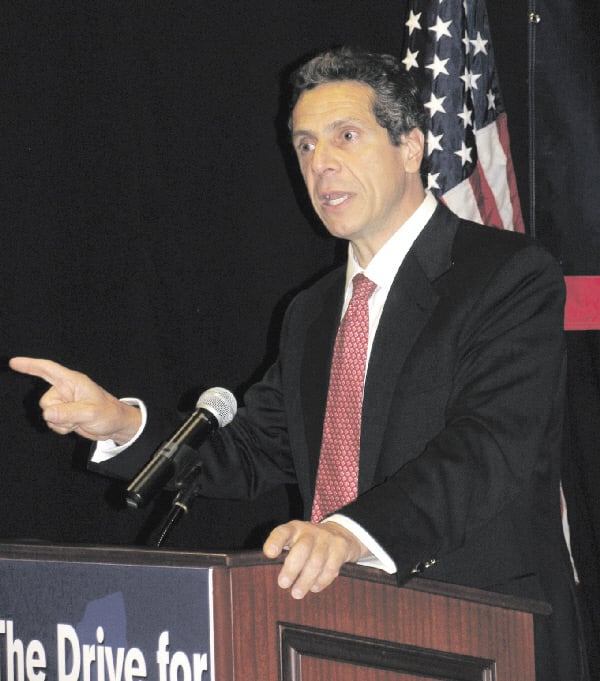 Denise Richardson Daily StarAndrew Cuomo, Democratic candidate for governor, speaks during a campaign stop at the Foothills Performing Arts and Civic Center in Albany on Saturday. 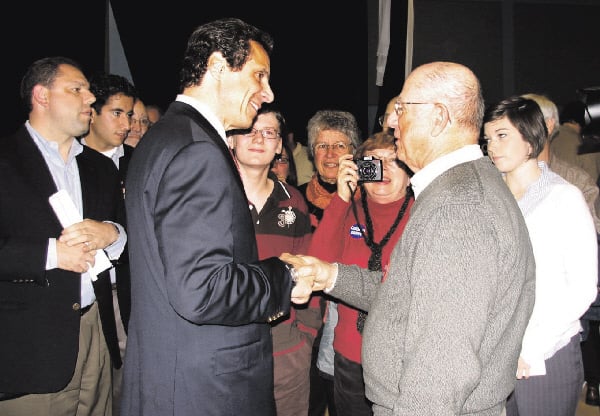 Denise Richardson Daily StarAndrew Cuomo, Democratic candidate for governor, speaks during a campaign stop at the Foothills Performing Arts and Civic Center in Albany on Saturday.

ONEONTA _ Government reform is the No. 1 job in Albany, Democratic gubernatorial candidate Andrew Cuomo said Saturday during a campaign stop in Oneonta.

"We have to clean up Albany," Cuomo, the state's attorney general, told more than 100 people at the Foothills Performing Arts and Civic Center on Market Street in downtown Oneonta. His repeated calls for change to restore trust in government sparked applause from listeners.

But he also said change depends on voters and their actions at polling places Nov. 2.

Recent polls have shown Cuomo with a growing double-digit-percentage lead ahead of Republican candidate Carl Paladino, a Buffalo millionaire.

Cuomo's "plan for a new New York" also aims to put the state's "fiscal house in order" and "right-size" government.

"This campaign is about returning government to the people and making it work for the people," Cuomo said. "Change is a long time coming. I'm excited to get past the election."

To remain a national leader in protecting and advancing individual rights, the state "must protect a woman's right to choose, achieve marriage equality, enact tough antidiscrimination laws, truly regulate Wall Street," and other goals, including continued opposition to the death penalty, Cuomo said.

Paladino, a developer and businessman, appeared at a Tea Party Patriots September rally in Otego that attracted more than 500 people. He pledged to cut state taxes by 10 percent in his first six months in office and reduce the size of government by 20 percent.

After his speech, Cuomo shook hands and spoke individually with voters and later with media representatives.

The state's lawmakers have relied too much on increasing taxes, Cuomo said, and his one-year emergency financial plan commits to no increases in personal or corporate income taxes or sales taxes and would impose a cap on local property taxes. The plan also calls for a cap on state spending and freezing salaries of state public employees.

Cuomo said efforts to rejuvenate the economy would draw on a regional rather than statewide approach, focusing on areas such as western New York and the Southern Tier.

Democrats Paul Robinson, Second Ward alderman in Oneonta, and his wife, Martha, said Sunday that they told Cuomo they were pleased "such a qualified candidate" was running for office. The standing ovations for Cuomo reflected support for the dynamic candidate, the alderman said.

Outside the Foothills center Saturday, about a dozen demonstrators waited for Cuomo holding "No Fracking" signs opposing drilling for natural gas.

Michael Fedorov of Maryland said Cuomo "would be surprised" at the number of anti-drilling voters supporting him with hopes that, as governor, he would "do the right thing" and not drill.