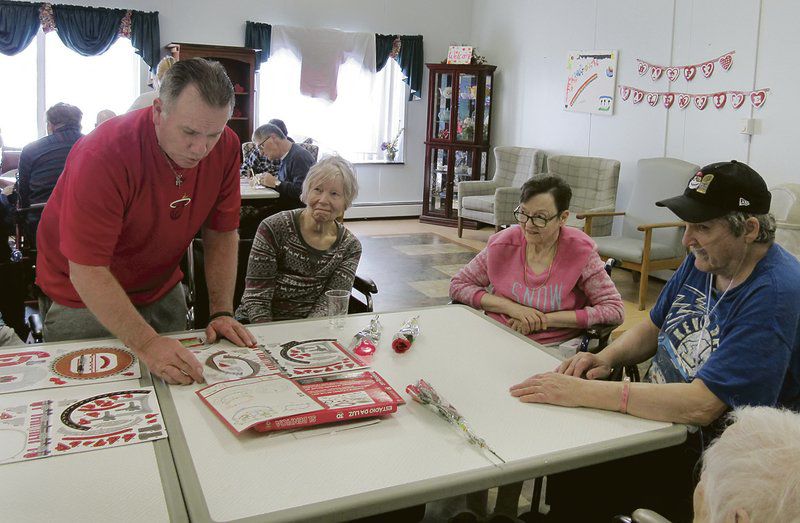 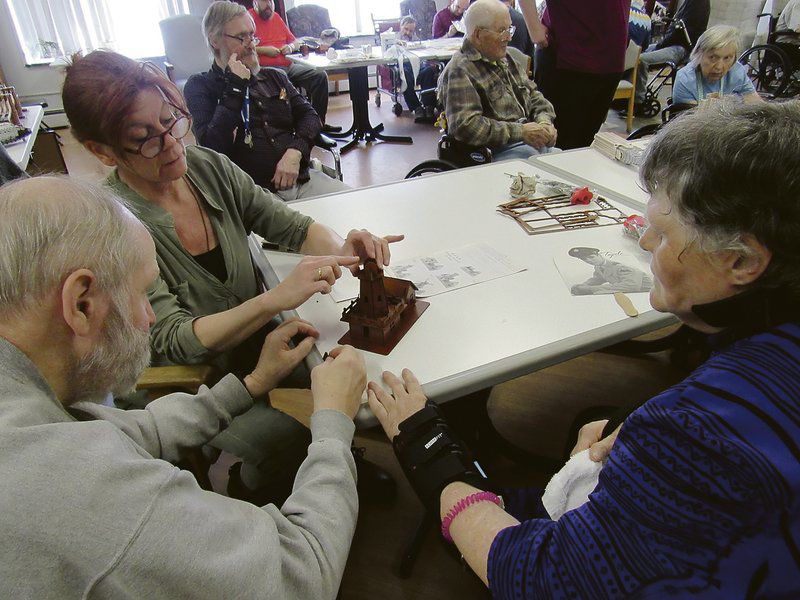 Shweta Karikehalli | The Daily StarFrom left to right, Janita Ansing, Gary Murphy and Ruthy Crawford build a model of a windmill while Bill Boyd, Howard Robinson and Diane Powell, from left to right, watch at the Chestnut Park Rehabilitation and Nursing Center in Oneonta on Wednesday, Feb. 12.

Shweta Karikehalli | The Daily StarFrom left to right, Janita Ansing, Gary Murphy and Ruthy Crawford build a model of a windmill while Bill Boyd, Howard Robinson and Diane Powell, from left to right, watch at the Chestnut Park Rehabilitation and Nursing Center in Oneonta on Wednesday, Feb. 12.

“I like getting to work with my hands,” Chestnut Park resident Gary Holcomb said. “It gives us something to do to pass the time away.”

"It's a complete distraction, it's a healthy distraction," Crean said, speaking of technology like television and smartphones. "You have to know when to break away. You want to find a cure, but sometimes it's just person to person, eye to eye, face to face."

Chestnut Park resident Anita Stratton said she and others worked on building a horse, which was a little tougher than they thought it would be.

"(The instructions) said 'plus 7,' and we thought, what 7-year-old could put this together?" Stratton said.

Stratton said she enjoyed the teamwork aspect and being able to get out of her room and do something. Crean gave all the ladies there a flower, she said, showing the red rose with a glowing light inside.

Some, such as resident Rick Barnes, worked alone. He grew up building car models, so something like this wasn't new to him, he said. Still, he said he enjoyed the challenge of putting things together, and the chance to get out of his room and move around a bit.

"It's picking up pretty well," Amaty said. "There are a lot of people that came and some people are hesitant to do the puzzles, but it's more about starting conversation and getting to know each other a little more."

Crean said his inspiration to help others in a welcoming way, without any agenda, came from his mother, who he said "participated, communicated and was a conversationalist."

Crean said he hopes to keep doing the puzzle activity at Chestnut Park. Some of the models he's already built, including detailed replicas of the One World Trade Center, the Notre Dame Cathedral, the Golden Gate Bridge and a globe, were displayed on a table in the room.

"That's a third of mine. I didn't bring the Taj Mahal," Crean said. "The thing is I have the Eiffel Tower out in the car, and that's three times bigger than any of those."

Crean said doing this for other people is beneficial for him too, helping him slow down.

"The greatest thing is, I have no agenda, I have no expectations. I'm just doing what I'm supposed to do," he said. "These people are my gift. I am not theirs."