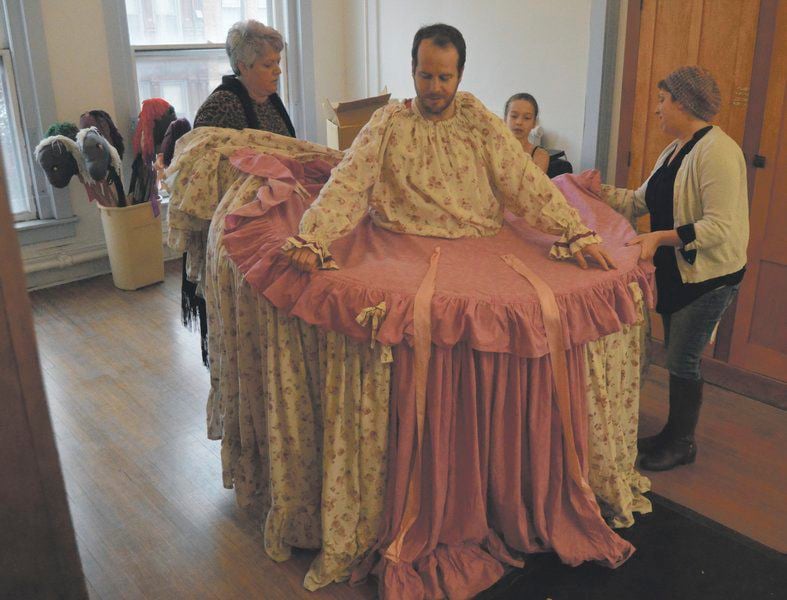 Sarah Eames | The Daily StarDan Buttermann, who will play Mother Ginger in the Fokine Ballet Company’s upcoming production of ‘The Nutcracker,’ tries on his costume for the first time Sunday, assisted by his daughter, Malena, center, and costume coordinators Anita Cleveland, left, and Liz Brzezinski, right. Men are traditionally cast in the role because the skirt and harness are too heavy for a woman to dance with, according to the costumers. 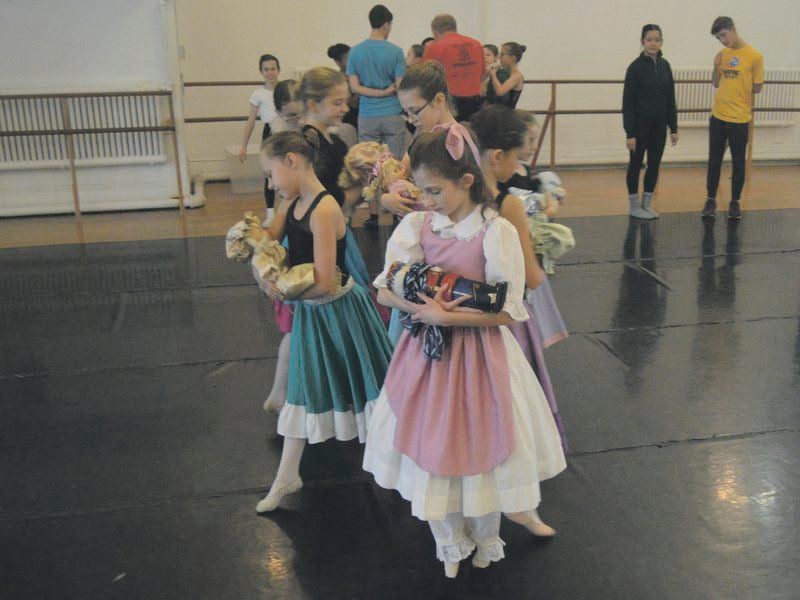 Sarah Eames | The Daily StarJuliana Brzezinski, who plays Clara in the Fokine Ballet Company’s upcoming production of ‘The Nutcracker,’ rehearses a dance scene on Sunday with other dancers in the show.

Sarah Eames | The Daily StarDan Buttermann, who will play Mother Ginger in the Fokine Ballet Company’s upcoming production of ‘The Nutcracker,’ tries on his costume for the first time Sunday, assisted by his daughter, Malena, center, and costume coordinators Anita Cleveland, left, and Liz Brzezinski, right. Men are traditionally cast in the role because the skirt and harness are too heavy for a woman to dance with, according to the costumers.

Sarah Eames | The Daily StarJuliana Brzezinski, who plays Clara in the Fokine Ballet Company’s upcoming production of ‘The Nutcracker,’ rehearses a dance scene on Sunday with other dancers in the show.

ONEONTA — The second-floor studio of the Fokine Ballet Company was a flurry of white tights and black leotards Sunday afternoon as scores of dancers, leaping and pirouetting across the hardwood floor, rehearsed for the company’s upcoming production of “The Nutcracker.”

The Fokine Ballet Company production is based on director Donna Decker’s grandmother Alexandra Fedorova Fokine’s restaging of the original production for the Ballet Russe in 1940, and on her mother Irine Fokine’s 1957 version.

Now in its 32nd year, this year’s production features about 65 dancers, ranging in age from 6 to 70, Decker said.

“Each year most of them come in knowing the part,” Decker said. “All we have to do is work on technique.”

Clara and Fritz, the adversarial brother-sister duo, are played by Juliana Brzezinski and Jack Fauth, both 12 years old and longtime dancers with the company.

“It gives me something to look forward to every year,” said Juliana, who has also played a little girl, a flower bud and a soldier.

“I love performing, and it’s fun to look forward to hanging out with my friends,” said Jack, who was previously cast as a soldier, a baby mouse and a gnome — “all the short-people parts,” in his words.

Auditions are held in the fall, Decker said, and the dancers rehearse nearly 100 hours before taking the stage in December.

“A lot of it comes down to size,” she said. “I like my first-act children to be tiny, and I like my parents tall.”

“What I love is the way the younger ones dance on the sides, imitating the older girls,” Decker said.

Some of the older dancers took a brief recess to teach the little gnomes their cues to enter and exit the stage during the second act.

Decker, who has taught ballet for 47 years, said many of the dancers return each year and some have passed on their love of performing to their children, who now attend the school.

Of the many veteran performers, Joe Cornell is “the only one who keeps coming back every year,” she said.

Cornell’s daughter, Alysen Parsons, performed in the first production, Decker said, and her father has joined the cast every year since.

Jamie Reynolds, playing the role of President Silberhaus, Clara and Fritz’s father, lifts Juliana in the air and waltzes with her in his arms during the adult dance number in Act One.

“Pretty much all the parents have kids in the show,” said dance teacher Mary Dirig, who plays Madam Silberhaus and whose three children also perform in the production. “It’s a family thing.”

Dancers playing the young boys and girls cradle dolls or mount hobby horses handed out from under the tree by the parents, building up to the iconic scene where Clara and Fritz struggle for the wooden nutcracker, with Fritz wrestling it from his sister’s grasp before carelessly smashing it on the ground and breaking it.

The mice and soldiers rehearsed their battle scene, scurrying across the floor on all fours or bearing wooden toy rifles, just before the nutcracker comes to life to fight them off.

The nutcracker, played by 11-year-old Caio Legname of Oneonta, comes to Clara’s rescue and clashes swords with the King Mouse, played by 24-year-old Evan Clark of Meredith.

In the Fokine production, men are traditionally cast as Mother Ginger because the costume base — a wide wooden frame held up by firemen’s suspenders — is typically too heavy for a woman to dance with, Cleveland said.

When asked to play the part, 10-year-old Malena Buttermann said her father was unsure at first, but agreed when “Ms. Decker told him ‘yes, do it.’”

“It wasn’t that hard to convince him after that,” Malena said.

Malena was cast as one of six polichinelle — little children or clowns — who emerge from Mother Ginger’s oversized hoop skirt and dance in the Land of Sweets.

The Fokine dancers will preview the performance for nearly 600 students in Morris, Edmeston and Laurens on Tuesday as part of the company’s mission to bring ballet to local children, according to Kira DeLanoy, chair of the publicity committee and one of the performers.

The show will also feature cameo appearances by adoptable animals from Super Heroes in Ripped Jeans.

General admission is $20 and students and seniors are admitted for $15. Tickets are available at fokineballetcompany.square.site or by calling 607-432-6290.

Sorry, there are no recent results for popular images.