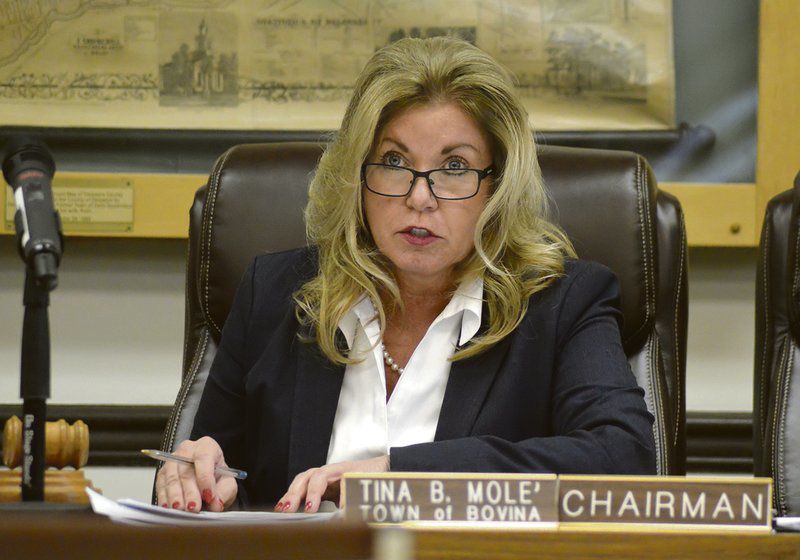 Sarah Eames | The Daily StarTina Molé, Bovina town supervisor and chair of the Delaware County Board of Supervisors, addresses the board with a prepared statement Wednesday following its vote to terminate the employment of Social Services Commissioner Dana Scuderi-Hunter. 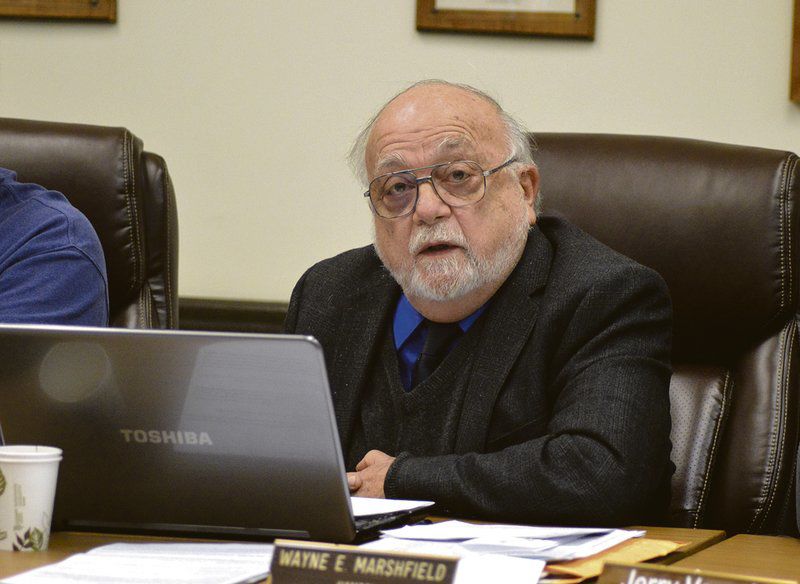 Sarah Eames | The Daily StarTina Molé, Bovina town supervisor and chair of the Delaware County Board of Supervisors, addresses the board with a prepared statement Wednesday following its vote to terminate the employment of Social Services Commissioner Dana Scuderi-Hunter.

DELHI — The Delaware County Board of Supervisors voted Wednesday to formally terminate the employment of Social Services Commissioner Dana Scuderi-Hunter, effective immediately, after months of negotiations and a nine-day disciplinary hearing on the matter.

The decision came two days after Alfred Riccio, the hearing officer appointed by the county to preside over the disciplinary hearing, issued his recommendation, ruling in favor of the county and recommending Scuderi-Hunter’s termination

The board met behind closed doors for nearly an hour, significantly delaying the start of Wednesday’s regular board meeting to discuss the matter with Frank Miller, the Syracuse-based attorney retained to represent the county in the disciplinary proceedings against Scuderi-Hunter.

In line with the recommendation of Ronald Dunn, the Albany-based attorney who represented Scuderi-Hunter in the matter, Tina Molé, Bovina town supervisor and chair of the board, and James Eisel, Harpersfield town supervisor and former board chair, recused themselves from the vote, reading from the same prepared statement to acknowledge that they both testified as witnesses during the disciplinary hearing.

“Under relevant case law, I am to abstain in order to avoid an appearance of bias,” they both read.

Sidney Town Supervisor Eugene Pigford also abstained from the vote. Scuderi-Hunter and other witnesses testified during the hearing that Pigford was present for a number of her meetings with Molé, county attorney Amy Merklen and personnel officer Linda Pinner, who characterized the meetings as disciplinary counseling sessions in their respective testimonies.

Addressing the board before the vote, Marshfield delivered a prepared statement justifying his vote against firing Scuderi-Hunter.

“The whole ordeal has divided the county to a level I’ve never witnessed before in my 26 years on this board — it will take years to repair, if ever,” he said. “Whether one was for or against the procedure, both sides lost.”

Marshfield, who serves as chair of the social services committee, decried what he described as the board’s disregard for the opinions of the committee, adding that the county’s “committee-style of government has also been damaged.”

“But we all know that it is our county taxpayers that took the biggest hit,” Marshfield continued. “They’re paying the bill for something that should never have happened.”

He noted the discrepancies between the county’s handling of Scuderi-Hunter’s termination and the events preceding the September resignation of real property tax services director Michael Sabansky.

In April, 12 of the board’s 19 supervisors voted against a pay raise for Sabansky, while nearly every other eligible department head was unanimously granted a raise. According to the county personnel officer, Sabansky resigned one day before his six-year term was set to expire.

“Instead of waiting four or five months (until the expiration of Scuderi-Hunter’s five-year term), we had to spend tens of thousands of dollars of hard-earned taxpayers’ dollars and create divisions throughout the county — we all know this has happened,” Marshfield said. “As usual, the only ones who have made out in the process are the attorneys — one smiling, and the other one not.”

Gladstone also took the floor to explain his position.

“After reading the hearing officer’s decision, I do not feel the blame should rest solely on the DSS commissioner,” he said. “In addition, I feel we could have done a better job following disciplinary process, that if morally and ethically correct, would apply the same to all of Delaware County employees.”

Reading from a prepared statement, Molé thanked the county department heads and employees for their “courage to come forward — to go on record — regarding the intolerable and unproductive working conditions surrounding Mrs. Scuderi-Hunter.”

“They stood up for the truth and for what is right in the face of all negativity in the media,” she continued. “Despite what has been reported or intimated, the majority of the staff stands behind the board in these decisions.”

From the time Scuderi-Hunter was placed on paid administrative leave in July, several department employees publicly stated their support for the commissioner.

More than 20 of the department’s 104 employees assembled outside the county office building in a Sept. 24 rally of support for Scuderi-Hunter during the disciplinary proceedings.

Her attorney included in his closing brief excerpts from sworn affidavits submitted by 22 social services employees “extolling the Commissioner’s supportive and empowering management style,” along with quoted testimony from eight additional witnesses called to the stand during the hearing who attested to Scuderi-Hunter’s professionalism.

“Having attended the hearing in its entirety, I wish to express my extreme dissatisfaction with the various media outlets that covered the public hearing,” Molé said, describing the reports as “highly inaccurate and biased.”

“I believe that the local media has done a disservice to the citizens of our county by falsely and inaccurately reporting on this hearing,” she continued. “I wish for the public to know that these charges were substantial and brought with great reluctance.”

Molé also contended, without further elaboration, that the county’s continued refusal to comment on the proceedings “has been interpreted by the media as a lack of transparency.”

“The county has not commented out of respect for this process and for the employees involved — all of them, including Mrs. Scuderi-Hunter,” she said. “The facts speak for themselves, and need no interpretation or filter.”

Molé claimed that Scuderi-Hunter and her attorney “disparaged the county attorney in an attempt to distract from the real issues.”

“Let the decision, which is supported by days of testimony, case law and numerous exhibits, serve to refute those claims and outlandish allegations,” she said. “Amy Merklen continues to conduct herself with the highest professional standard.”

In closing, Molé commended employees of the social services department, under the leadership of Deputy Commissioner Sylvia Armano, “for staying focused for this time of transition.”

“Despite the added stress of the last five months, the department remained true to their mission,” Molé said.

“I remain proud of my entire record and would change nothing that I have done, despite the outcome,” Scuderi-Hunter told The Daily Star on Wednesday. “As a public officer, I took an oath of office and I have served honorably and compassionately.”

The hearing officer’s recommendation and complete list of the disciplinary charges, along with Molé’s prepared statement to the board, may be viewed in their entirety at co.delaware.ny.us

Delaware County Social Services Commissioner Dana Scuderi-Hunter should be fired, according to the officer who presided over a disciplinary he…

MOUNT UPTON - Charles Wightman, born on Jan. 8, 1927, in Norwich, passed away at the New York State Veterans Home at Oxford. He was son of the late Charles B. and Neva (Marean) Wightman. Chick's mother, Neva, died when he was in third grade. Stan and Adda Crawley and family lived across the …