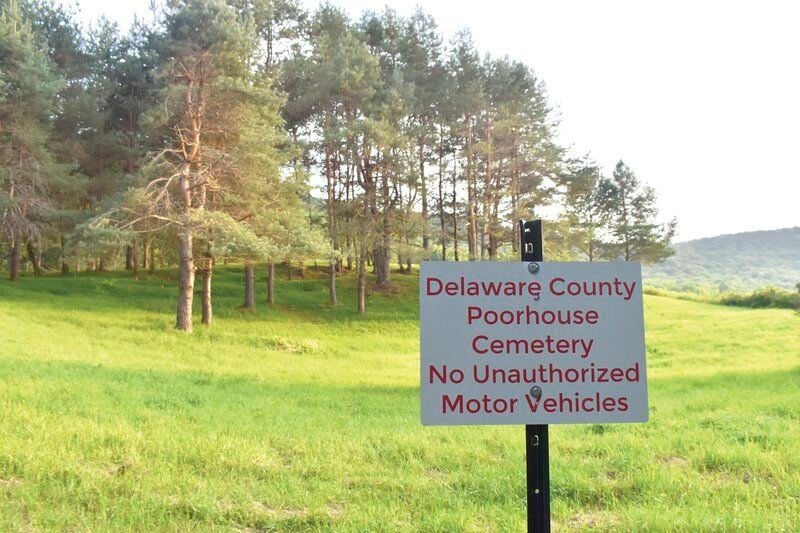 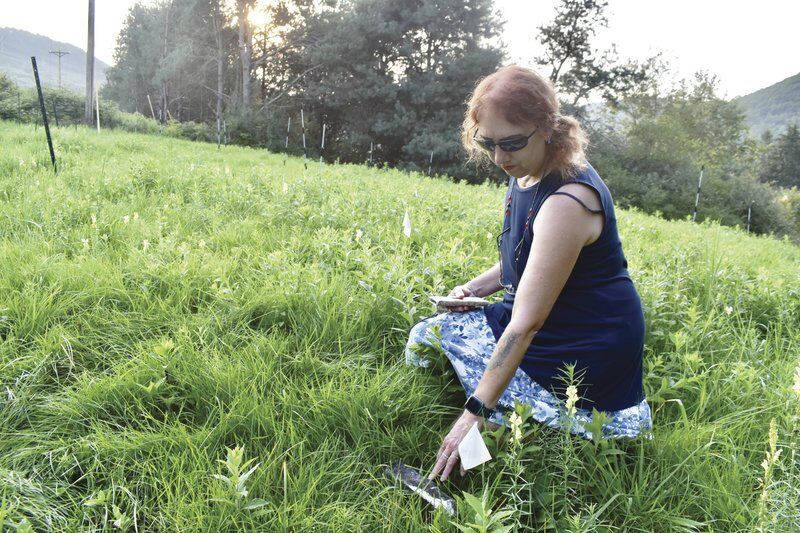 Sarah Eames | The Daily Star Delaware County Historian Gabrielle Pierce uncovers a stone marking one of the hundreds of graves at the cemetery of the former Delaware County Poorhouse in Delhi on Wednesday, Aug. 25. 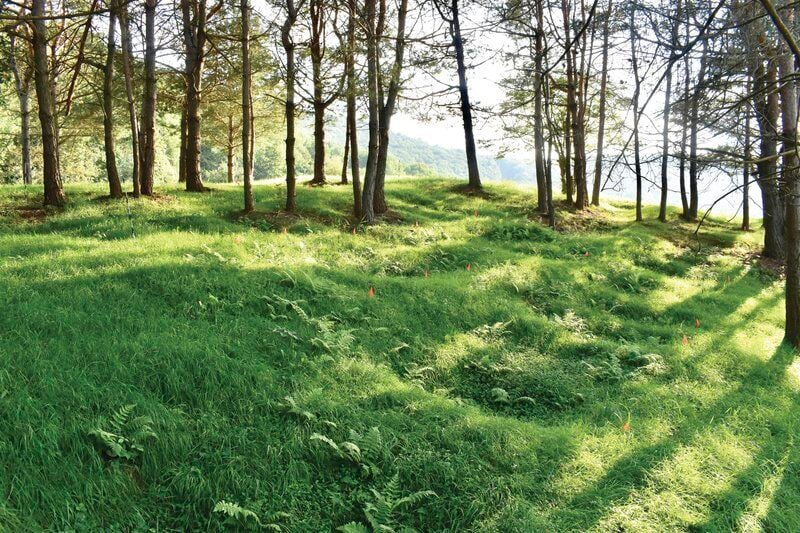 Sarah Eames | The Daily StarABOVE: Unmarked sunken graves are visible in the upper section of the cemetery at the site of the former Delaware County Poorhouse, shown Wednesday, Aug. 25. RIGHT: Delaware County Historian Gabrielle Pierce uncovers a stone marking one of the hundreds of graves at the cemetery.

Sarah Eames | The Daily Star Delaware County Historian Gabrielle Pierce uncovers a stone marking one of the hundreds of graves at the cemetery of the former Delaware County Poorhouse in Delhi on Wednesday, Aug. 25.

Sarah Eames | The Daily StarABOVE: Unmarked sunken graves are visible in the upper section of the cemetery at the site of the former Delaware County Poorhouse, shown Wednesday, Aug. 25. RIGHT: Delaware County Historian Gabrielle Pierce uncovers a stone marking one of the hundreds of graves at the cemetery.

DELHI — A decades-long effort to restore and preserve the graves of hundreds of former Delaware County residents got a financial boost from the county last week.

The cemetery serves as the final resting place for at least 401 residents of Delaware County’s 19 towns and beyond, according to Delaware County Historian Gabrielle Pierce, who is overseeing its restoration.

“The issue of maintenance of this sacred ground has been my driving force for years,” Pierce said. “I would like to note my appreciation to the members of the Board of Supervisors for taking a positive step forward in the future restoration and ongoing maintenance of this place, and in so doing, making it accessible to the public and providing awareness that such places existed in our history.”

Most of the graves are unmarked, Pierce said, and those few with a stone are identified with only a number.

Through old keepers’ registers in which the overseers of the poor recorded basic biographical information about everyone admitted to the poorhouse, including name, age, place of birth, reason for admittance, date and reason for leaving, Pierce said she was able to catalog all the information available about each resident into a single spreadsheet.

Although no formal map of burial spots was ever kept, the overseers would note, when appropriate, the date and cause of death and the location of the burial, Pierce said, but grave numbers at the poorhouse cemetery were not consistently recorded.

“Unfortunately, with only a few original stone markers remaining, plus no map of the cemetery, we can only match a handful of names to the few existing markers,” Pierce said.

Many of the stones were moved or taken throughout the years, Pierce said, further complicating the task of identifying the graves by name.

A pair of stones were unceremoniously relocated to the cemetery grounds shed to be used as stepping stones, Pierce said. Another pair were recently discovered in a drainage ditch on private property in the village.

The grounds, including the cemetery, have changed hands several times in the half-century since the shuttering of the poorhouse, Pierce said.

The property, adjacent to what is now the College Golf Course at Delhi, was sold in 1963 to the Faculty-Student Association of the State University Ag & Tech Institute for $35,500 by the county.

“Somehow, county officials and the county attorney did not notice that the grounds included the cemetery, which never should have left county ownership,” Pierce said.

Under the ownership of the college, the cemetery was used as storage and grazing grounds for the college farm, according to Pierce.

While some graves are visible in the upper and lower sections of the cemetery, either because they sunk through the years or because the stones were undisturbed, the central portion is nearly unrecognizable as a burial site.

The cemetery grounds were “rediscovered” within the last decade when New York City sought the purchase of the surrounding 200 acres for its watershed, Pierce said. Because the watershed program is not permitted to obtain lands that include a burial ground, the cemetery was returned to county ownership by the College Association at Delhi.

Under the direction of then-Delaware County Sheriff Tom Mills, residents at the Allen Residential Center in South Kortright worked to clear and maintain the property, Pierce said. The boys were formally recognized for their work with certificates of appreciation presented at a county board meeting.

“Those boys did an amazing job and showed genuine interest in the history of this place,” she said.

Upkeep of the grounds is now the responsibility of Delaware County Buildings and Grounds Maintenance, under the direction of Superintendent Pete Montgomery.

The next priority is filling in the visible sunken graves to ensure the safety of grounds crews, volunteers and visitors, Pierce said. Ideally, the graves will be marked before they are filled.

The county contracted with a local mother-and-son duo — who also provided permanent markers for the Pepacton Cemetery after it was relocated to make room for the reservoir — to carve stones that read: “Delaware County Poor House: Unknown.”

From 1828 to 1963, the poorhouse served several hundred residents, Pierce said; some of whom arrived voluntarily and others who were committed against their will.

“This was a time when people — women especially — could be sent away for just about anything,” Pierce said. “Husband left you? Off to the poorhouse! Acting ‘odd’ once a month? ‘Away you go!’ says your doctor.”

Pierce said she has uncovered stories of wealthy, independent residents who were committed to the poorhouse by greedy family members after their fortunes.

“It’s a shame that more people today don’t seem to care about what happens to this place,” Pierce said. “You never know if it’s your relatives who are buried here; if this place is part of your history.”

Pierce, who has served as county historian for 10 years, said she took up the reins of restoration from the late Charles Eustis, a Delhi resident whose son, Harold, owns Delhi Paint & Paper.

“He died being unsuccessful in getting anyone to listen,” Pierce said. “I hope that will not be the case with me.”

The restoration of the cemetery grounds is also slated to include the creation of a parking area by the old sheep barn on Arbor Hill Road and the clearing of a path from there to the cemetery for easier and safer access by the public, Pierce said. An informational kiosk will also be installed.

“Throughout New York state, there has been a growing recognition and appreciation of these important historic places and some counties are working hard and admirably to restore their poor house cemeteries,” Pierce said. “Sadly, in too many counties, the opposite is true, and these places continue to suffer from neglect and a lack of respect for the history of those counties. These are sad chapters in our histories and should not be ignored. It would be a feather in Delaware County’s cap to be a shining example in doing a good job with this.”