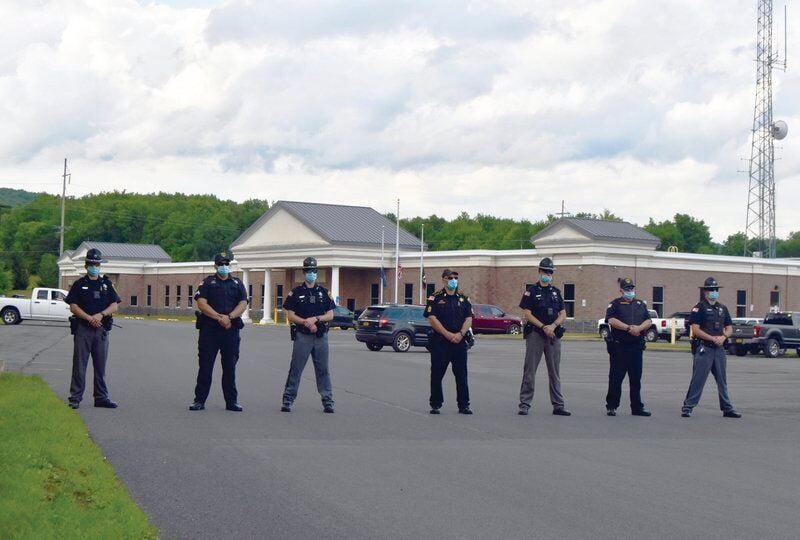 Sarah Eames | The Daily Star In this Aug. 1, 2020, file photo, Delaware County sheriff’s deputies block the driveway entrance to the Delaware County Public Safety Building on Aug. 1, 2020, as demonstrators from the March for People’s Protection approached the facility. The parking lot was closed except for emergencies. 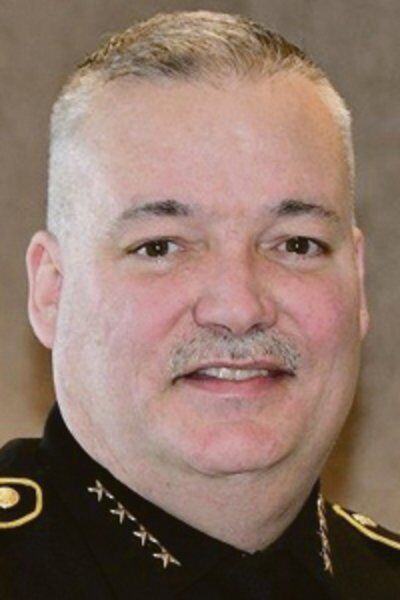 Sarah Eames | The Daily Star In this Aug. 1, 2020, file photo, Delaware County sheriff’s deputies block the driveway entrance to the Delaware County Public Safety Building on Aug. 1, 2020, as demonstrators from the March for People’s Protection approached the facility. The parking lot was closed except for emergencies.

Two members of Delaware County’s police reform and reinvention collaborative have quit and three others are submitting a supplemental report to the state after deeming the committee’s final report unsatisfying and incomplete.

The 27-page final report was formally introduced at the Feb. 24 meeting of the Delaware County Board of Supervisors. A public hearing on the plan, as required by New York state Executive Order No. 203, was set for 12:45 p.m. Wednesday, March 10.

“It’s been very difficult for us because we thought we were doing so well with the committee. We did not expect it to end this way,” said Joyce St. George, a professor of criminal justice at SUNY Delhi and one of five committee members to sign a Feb. 25 “statement of concern” in response to the final report.

The statement, which named 40 recommendations that were disregarded in the final plan, was also signed by SUNY Delhi criminal justice professor Simon Purdy; Jen Cutting, a rape crisis counselor and certified recovery coach and peer advocate; and Jessica Farrell and Walt Keller of the Delaware and Otsego chapters of the National Alliance on Mental Illness.

The latter two members of the committee have since resigned, St. George said.

“They just felt it would be an insult to attach their names to this final report,” she said. “I wanted to quit. I was ready to quit on Friday, but I want to be a committee member when I speak at the public hearing.”

St. George said she and her fellow dissenters intend to have a minority report ready in time for the public hearing. A copy will also be forwarded to the governor’s office and a new division of the state Attorney General’s office tasked with investigating police misconduct.

Molé responded to the statement of concern in a Feb. 26 letter, of which she provided a copy to The Daily Star.

“Thank you for taking the time to express your thoughts on this important project,” she wrote. “I am sorry that you misapprehend the role of the committee in the development of our Delaware County Police Reform and Reinvention Collaborative Plan.”

“You have had since November 4, 2020, in which to make your case for your ideas. We had many valuable discussions and … many of your ideas were accepted in the drafting of the plan,” Molé continued. “However, there is a time when ‘consultation’ with stakeholders must end and the development of the plan must be accomplished. If every time we drafted a ‘final plan’ we had to send it out for ‘approval’ by all the stakeholders, with all their differing views, we never would have a final plan.”

The official report failed to address the committee’s examination and discussion of race, substance use and barely mentioned mental health, St. George said.

“The executive order was predicated on George Floyd, Breonna Taylor and all the other African American people who have died at the hands of police,” she said. “That’s something the sheriff and Tina Molé did not want to address.”

In her examination of four years’ worth of county arrest and conviction data, St. George said she found a remarkable racial disparity. She was shut down on numerous attempts to bring the Delaware County Jail into committee discussions.

“The jail is not part of Executive Order 203,” DuMond said. “The sheriff has nothing to do with convictions. Police don’t convict people.”

Results from the committee’s second community survey indicated that respondents who identified as people of color had a higher level of trust in the sheriff’s department than white people, and showed little difference in the rate at which white respondents reported being pulled over or arrested from the rate of people of color.

“We wanted to make clear that in terms of race, there may be nothing significant happening right now based on the survey data, but it’s there,” St. George said. “We are aware of it and we will pay attention to it.”

“We’re talking about a system that’s just not working for people today,” she continued. “Instead of looking at the system, Craig said it has nothing to do with the sheriff so we’re not going to deal with it.”

“The plan is a plan to move things forward for the future,” DuMond said. “Why would we include something that’s not a problem?”

St. George said DuMond was opposed to the idea of the committee from the start. She said he asked her to review his department’s policies and procedures and “sign off” on a report to send to the state in lieu of forming a committee and going through the evaluation process.

“That conversation never took place,” DuMond said. “I was always in support of this committee 100%.”

DuMond said St. George “misinterpreted” his request, which he described as an effort to convince her to sign on to the committee at the start of the process.

“Because of our accreditation, it’s going to be an easy lift,” DuMond said he told St. George. “I was looking at her as a valued member of our committee and I wanted to make sure she was with us.”

St. George attributed DuMond “dragging his feet” on the matter to the nearly five-month delay in the committee forming, from June when the executive order was issued to the committee’s first meeting in November.

“I can respect the resistance anybody would have to this level of scrutiny,” she said. “Everybody’s trying to protect their turf. Nothing’s going to change that way.”

“I said it from the very beginning: I’m very proud of our deputies,” DuMond said. “I invite outsiders to see and validate the wonderful work we’re doing and also to offer a critical eye on things. I think it’s important to gain perspectives of people who think differently than we do.”

DuMond said he believes the requirements of the executive order are covered mostly by the state accreditation process.

"The New York state accreditation process requires you to stay progressive, " he said. "The best thing about accreditation is it prepares you for the problems of tomorrow."

St. George noted that the committee members whose contributions were not included in the plan were private citizens and community advocates.

“We have backgrounds, we have experience,” St. George said. “We are the community voice and we feel we have been silenced. We were shut down and we have been told that our comments are no longer welcome.”

Prior to moving to Delaware County, St. George investigated corruption within the NYPD as an investigator with the Attorney General’s Office

“We wanted to see this plan and this county to upgrade to meet the new demands of society: bail reform, marijuana legalization, the changing demographic,” St. George continued. “I’ve been trying to work with the sheriff in the capacity for years. We all had a real, genuine interest. Craig seemed very interested in what we were saying and very welcoming of any feedback.”

“I consider myself a bridge-builder,” DuMond said. “I think I do a diligent job reaching and building consensus. I think we can still come out of this strong.”

“We’re just trying to make the community better,” St. George said. “We don’t have a dog in this fight. For us, it’s not about politics.”