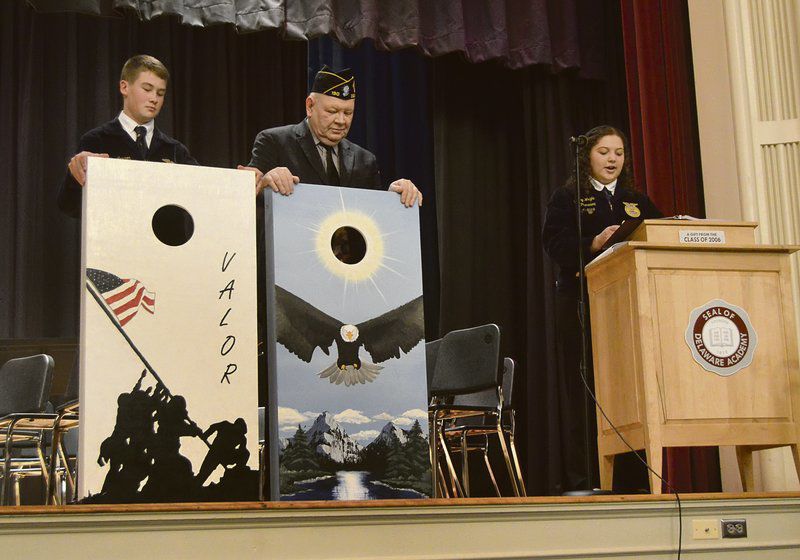 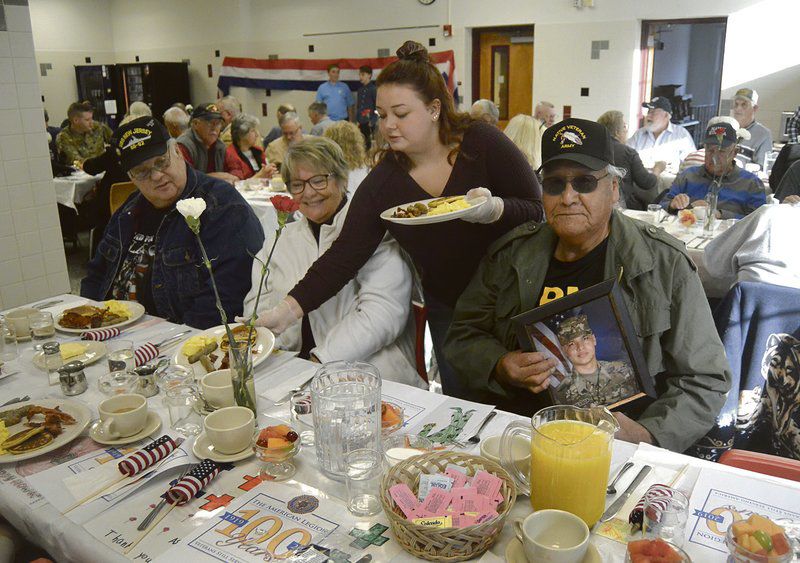 Sarah Eames | The Daily StarDelaware Academy senior Ashley Hook serves plates of pancakes and eggs to Rudy and Diane Stripp, left, of Stamford, and Cliff Eaglefeathers, right, who holds a photo of his grandson, Eli Eagleroad, a 2019 DA graduate stationed in Afghanistan.

Sarah Eames | The Daily StarDelaware Academy senior Ashley Hook serves plates of pancakes and eggs to Rudy and Diane Stripp, left, of Stamford, and Cliff Eaglefeathers, right, who holds a photo of his grandson, Eli Eagleroad, a 2019 DA graduate stationed in Afghanistan.

DELHI — Students and staff at Delaware Academy welcomed their largest crowd of veterans to date for the school’s annual Veterans Day celebration Wednesday.

Veterans were welcomed with a slideshow of Delaware Academy alumni who served in the armed forces and invited to sign a Veterans Day banner. Student volunteers escorted their guests to the cafeteria, where they were served a breakfast of pancakes, eggs, bacon and sausage on handmade laminated placemats for each veteran to take home.

This year is the school’s sixth hosting the event, according to school counselor and event organizer Michelle Cleveland.

“When we first started, we had about 20 veterans — everybody fit on the stage,” said student organizer Sarah Ackerly. “It grows every year.”

Seniors are required to complete 10 hours of community service, and members of the National Honor Society are also required to volunteer throughout the year, Ackerly said.

“We’re a very active school, so it’s not hard to find kids to help out,” she said.

Staff Sgt. Jordan Ellis, who works as a recruiter in Oneonta, spoke about the significance of the “Missing Man Table,” also known as the “fallen comrade table.”

The table is round to represent the everlasting concern the survivors have for the missing, he said, and covered with a white tablecloth to symbolize the pure intentions of the service members who responded to the country’s call to arms.

Superintendent Jason Thomson welcomed students and guests in the auditorium for a special presentation.

“Today we get to honor real-life heroes,” Thomson said. “Look around you. Our veterans are heroes.”

Students of all ages participated in the ceremony, from the second- and fifth-grade choruses to the middle school and high school band and orchestra, performing a patriotic selection that included variations of the “Star-Spangled Banner,” “Battle Hymn of the Republic” and “America the Beautiful.”

Kayleigh Verspoor, a senior, performed the national anthem, and Warren Pardee, also a senior, sang a cover of Jamey Johnson’s “In Color.”

Polly Dellacrosse raffled off handmade quilts to 10 veterans in attendance, and students Sean Carron and Lindsay Wright presented the school’s annual gift to the American Legion — this year, a pair of cornhole boards built by students in the seventh-grade technology class and painted by members of the school’s art club.

Pfc. Alex Specht, a 2014 DA grad, described his experiences serving with the New York National Guard, which included the presidential security detail during the 2017 inauguration.

Rossley, 92, maintains that he has two ages — his real age and his military age, accounting for the two-year difference between his birthdate and the one he used to enlist underage.

“The students do a fabulous job every year,” McGrath said, calling for a standing ovation for the students in attendance. “It means a lot to the local veterans.”