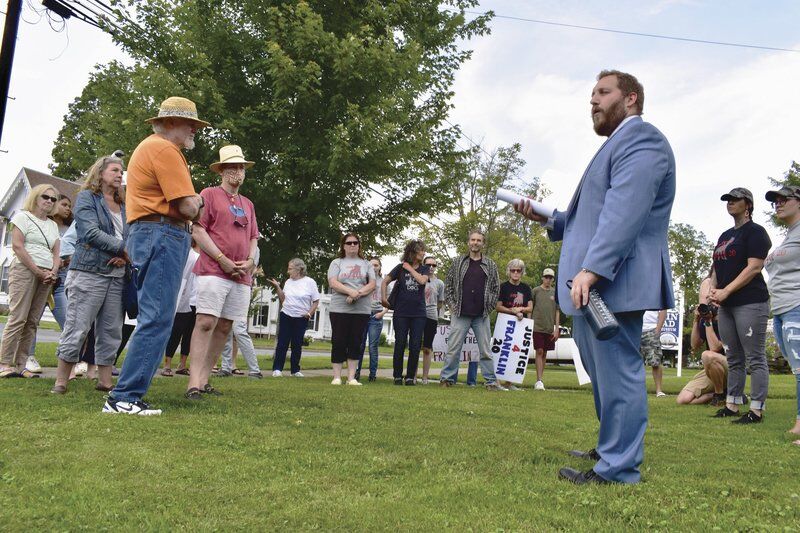 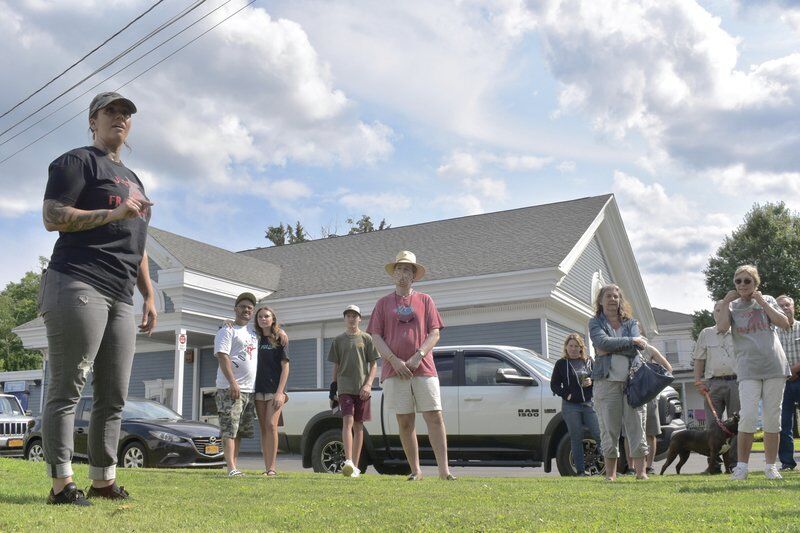 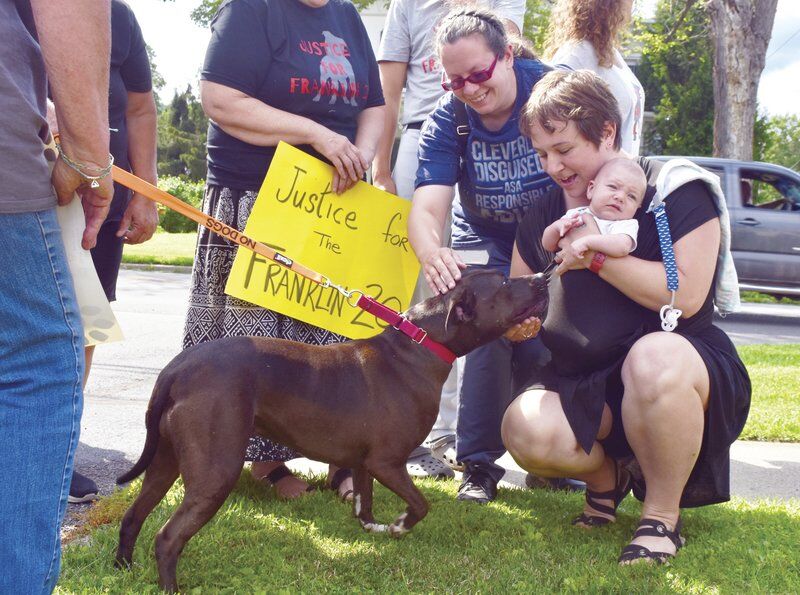 Sarah Eames | The Daily Star Fable, one of the Franklin 20, greets Oneonta resident Jenn Wendling and her six-week-old son, Everett Oralls, outside Franklin Town Court during a Thursday, July 22, demonstration supporting the prosecution of former Franklin resident Nasir Azmat, who was charged last year with more than 40 counts of animal cruelty in connection with an alleged dogfighting ring. 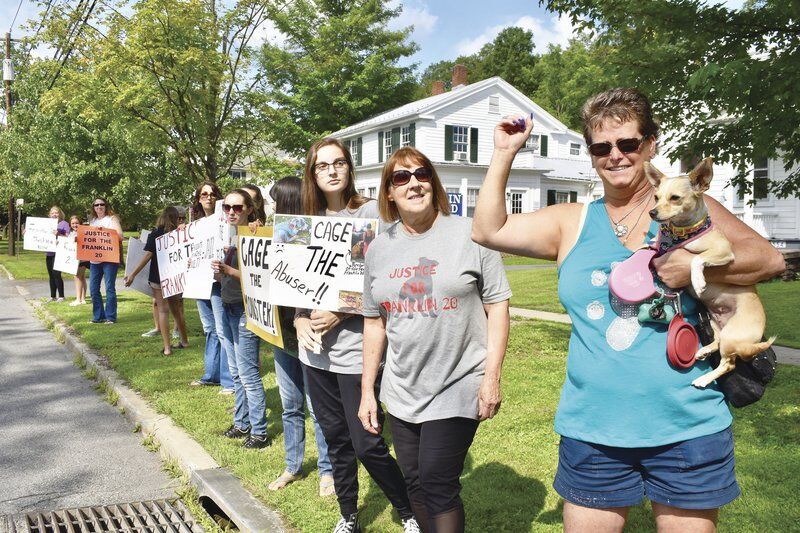 Sarah Eames | The Daily Star Franklin resident Cyndi Hendrickson and her rescue dog, Zoey, stand beside Sidney resident Janice Vitek as they demonstrate outside Franklin Town Court during a Thursday, July 22, demonstration supporting the prosecution of former Franklin resident Nasir Azmat, who was charged last year with more than 40 counts of animal cruelty in connection with an alleged dogfighting ring.

Sarah Eames | The Daily Star Fable, one of the Franklin 20, greets Oneonta resident Jenn Wendling and her six-week-old son, Everett Oralls, outside Franklin Town Court during a Thursday, July 22, demonstration supporting the prosecution of former Franklin resident Nasir Azmat, who was charged last year with more than 40 counts of animal cruelty in connection with an alleged dogfighting ring.

Sarah Eames | The Daily Star Franklin resident Cyndi Hendrickson and her rescue dog, Zoey, stand beside Sidney resident Janice Vitek as they demonstrate outside Franklin Town Court during a Thursday, July 22, demonstration supporting the prosecution of former Franklin resident Nasir Azmat, who was charged last year with more than 40 counts of animal cruelty in connection with an alleged dogfighting ring.

Under the terms of the deal, Nasir Azmat would have been sentenced to serve 364 days in jail with the possibility of early release for good behavior after eight months, according to Delaware County Assistant District Attorney Richard Caister, who was assigned to prosecute the case at its onset more than 17 months ago.

The Delaware County Sheriff’s Office charged Azmat with 41 counts of animal cruelty-related offenses after 20 dogs were discovered in squalid conditions in a barn on his Franklin property in February 2020.

Because Azmat, who was not present for Thursday’s proceedings, rejected the plea deal through his assigned counsel, George Collins, the case may still go to trial, Caister said.

Unless the case is moved to Delaware County Court, Azmat is scheduled to appear in Franklin Town Court on Thursday, Aug. 12.

“No!” the crowd answered in unison.

Shelter volunteer Jill Stafford joined Insinga in voicing her frustrations with the slow pace of the case, which was further compounded by statewide court closures amid the onset of the coronavirus pandemic within weeks of Azmat’s arrest.

“The ADA can stand up here and say, ‘It’s COVID, we can only do so much.’ That’s (expletive),” Stafford said. “It’s time for them to do their jobs. Their job is to prosecute people like this that harm innocent beings in our community. I don’t care if it’s a dog — what’s next, a kid? A person? If he’s able to commit acts of violence this severe, what else is he capable of? I’m over it.”

Stafford helped Insinga and Delaware deputies remove the dogs from Azmat’s property and relocate them to the shelter. Within weeks, she fostered and eventually adopted Remo, the oldest and most visibly scarred of the group.

“Every day, I have to see my dog — I can’t talk about this without crying,” she said tearfully. “My dog is living with long-term trauma because of what Nasir Azmat did to him.”

“My dog has a blood disease that only dogfighting dogs get,” Stafford continued, referencing Remo’s babesia diagnosis, which required several rounds of antibiotics. “Your dogs don’t get this disease, dogfighting dogs get it. The proof is in everything that the sheriff put together and gave to them on a silver platter.”

“Somebody who’s helping dogs is not keeping 20 of them locked in a barn where nobody else knows about them,” Stafford said.

Vestal resident Jen Brockner recalled the story of how she came to meet Arthur, one of six Franklin dogs transferred to the Broome County Humane Society shortly after their rescue.

“I decided during COVID that I was going to foster dogs,” she said. “I had never done it before, but I was working from home and it was an empty home, so it was perfect.”

Brockner said she was “a little taken aback” when she learned of her foster dog’s history.

“We got in a room together and this dog was the sweetest dog I’ve ever seen. He was happy to be alive, and now I can completely understand why,” she said. “I brought him into my home. He was shy, he was scared, but he was so loving. I am so blessed and so grateful to have had him in my home, even for four months.”

“Hats off to her, a first-time foster taking on a dogfighting survivor,” said Stafford, a seasoned rescue dog rehabilitator.

“I would recommend it to anyone,” Brockner said. “Anyone who has the ability to show love to a dog, you can do it.”

The star of the show Thursday was Fable, a 4-year-old pitbull mix who was likely used for breeding, according to Insinga.

Fable — who has not yet adjusted to her new name, Sable — was the last of the dogfighting survivors known as the Franklin 20 to be adopted into a permanent home.

“In her 17 months at the shelter, Fable thrived,” Insinga said. “Somebody forgot to tell her she was a shelter dog.”

Fable went for almost daily excursions with Insinga’s husband, Jack, who owns a barbershop in Sidney about a mile from the shelter, where she enjoyed the company of his clients, a bed and toys of her own and regular pepperoni snacks from Gavin’s Pizzeria across the street.

Earlier this month, Fable found a home in the village of Otego with Buzz and Jackie Hesse, who recently lost their pitbull rescue, Bella, to cancer.

“As good fortune would have it, and some may see it as an act of God, we went down to the shelter,” Buzz told the crowd gathered in Franklin. “Erin showed us four dogs — they were all good dogs — and there was sort of a moment where she didn’t say anything, and then said, ‘Well, we have one more.’ She came out with this little doggie here.”

“We took her home, and she would not leave me alone,” he continued, patting the smiling, tail-wagging dog laying proudly at his feet. “Every place I went, she followed me along. She sleeps on my bed every night.”

Fable runs without a leash on the Hesses’ seven-plus acres and loves to dive into their pond, Buzz said. The transition did require some adjustment: Fable had never before encountered stairs, and had to be learned in their use.

“She is just about a perfect doggie, I’m telling you,” Buzz said. “I can’t even begin to tell you how grateful Jackie and I are to Erin.”

“This should be open and closed,” Stafford said. “This should not be a difficult case, but for some reason, the district attorney’s office of Delaware County is making it a difficult case — for what reason? Do your jobs, do it quickly and put Nasir Azmat in jail.”

A demonstration supporting the prosecution of former Franklin resident Nasir Azmat, who was charged last year with more than 40 counts of anim…