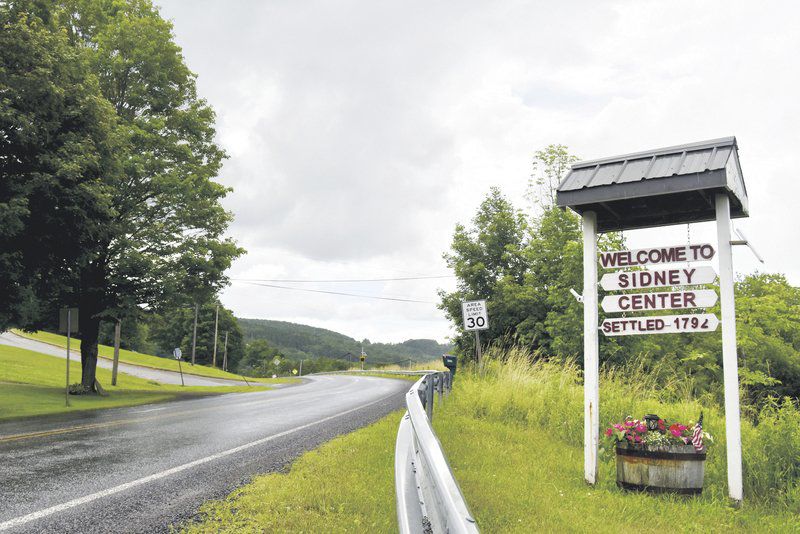 Sarah Eames | The Daily StarA sign along county Route 23 welcoming travelers to the hamlet of Sidney Center is shown Wednesday. 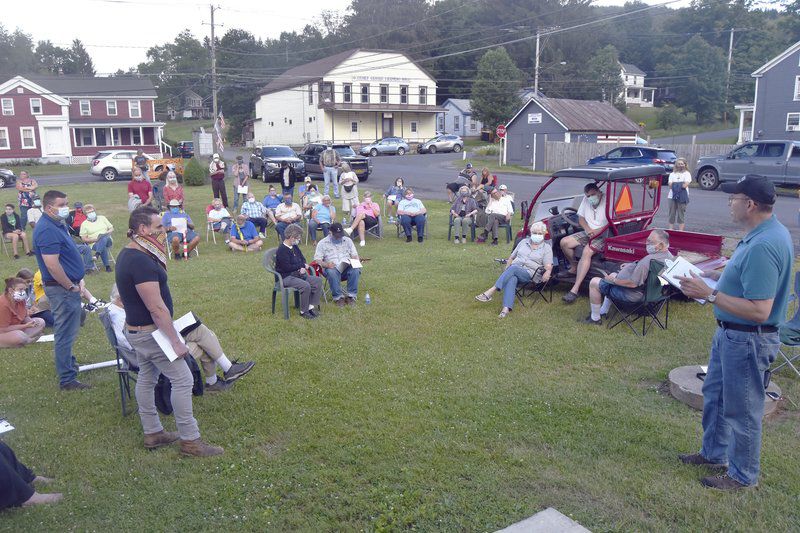 Sarah Eames | The Daily Star Sidney Center resident Gary Ramsey addresses more than 60 other residents on the fire station lawn during a Wednesday meeting with town officials to discuss the proposed rezoning of the hamlet.

Sarah Eames | The Daily StarA sign along county Route 23 welcoming travelers to the hamlet of Sidney Center is shown Wednesday.

Sarah Eames | The Daily Star Sidney Center resident Gary Ramsey addresses more than 60 other residents on the fire station lawn during a Wednesday meeting with town officials to discuss the proposed rezoning of the hamlet.

SIDNEY CENTER — A meeting with several town officials drew more than 60 residents in face masks and lawn chairs to the front yard of the fire station Wednesday evening to discuss a proposal to rezone a stretch of county Route 23 from residential to commercial.

Sidney Center resident and longtime community organizer Jessica Farrell said she called the meeting out of concern that decisions were being made for the hamlet without contribution from its residents.

“There is a long, long history that we do not have a voice here,” she said. “It’s a sad feeling to think you don’t count.”

Many residents were unaware of the proposed changes until seven-year-resident Gary Ramsey brought it to their attention, Farrell said.

Describing the hamlet as “mainly residential with a defined commercial zone,” Ramsey said that rezoning Sidney Center’s “downtown” seems “like a radical solution to a more nuanced issue. It just doesn’t feel right.”

The hamlet’s current commercial zone consists of 16 lots clustered at the intersection of county routes 23 and 35, near the Sidney Center Fire Department and Firemen’s Hall, and three lots near Jess F. Howes Building Supplies.

“The idea is to have a continuous run,” said Bill Brown, chair of the zoning board of appeals.

“We are not against expanding our existing zoning. We need room to grow,” Farrell said. “We are not against progress, but we lack infrastructure,” highlighting the hamlet’s lack of sidewalks, limited parking and history of flooding and septic problems.

Many residents voiced their support for small business development in the hamlet — as Ramsey described it: “seeking to increase business opportunity without rezoning to commercial use.”

Brown noted that certain commercial endeavors could be developed in a residential zone by obtaining a special-use permit.

“We are the perfect example,” said Niki Greenwood, who is in the process of opening a cafe with her husband, Andy. “We bought a dilapidated house thinking we could bring some community into the community.”

“I’m from New York and he’s from Massachusetts,” she continued. “We love our breakfast, and there’s no good breakfast joint around here.”

When the couple purchased the county Route 23 property nearly three years prior, its deed designated it for residential-agricultural use, Andy said. They were granted a special-use permit, but were issued a cease-and-desist notice just eight months later when code enforcement officials realized the property was zoned exclusively for residential use.

“We bought it on the assumption a business could go there,” Andy said.

Many setbacks later, plans are still in the works to open the cafe, Niki said, but the process has been “extremely frustrating.”

Brown said that the deeds for many properties throughout the town could be 100 years old or more.

“The town’s zoning map is dated. It doesn’t even show Interstate 88,” he said, adding that Sidney Center’s zoning has not been updated since 1989.

Addressing suspicions that the proposed zoning changes were motivated by the town’s desire to develop three empty residential lots it owns along county Route 23, Sidney Town Supervisor Gene Pigford said that the proposal had been “a long time in the making.”

“Sidney Center residents have wanted to facilitate appropriate commercial development in the area,” he said. “We want to look at development without it being at the expense of the ambiance that has made this community the wonderful place it is to be.”

He promised to more actively engage residents of the hamlet in a continuing dialogue concerning its future, starting with Zoom meetings as early as next week.