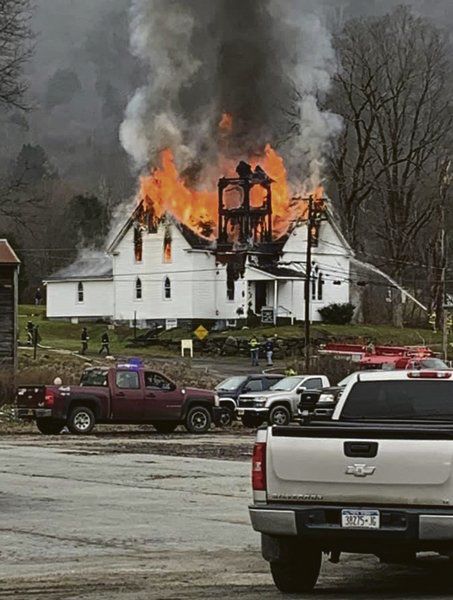 Michael SteeleFlames are shown erupting from the roof and steeple of the East Branch United Methodist Church on Monday, Nov. 11. 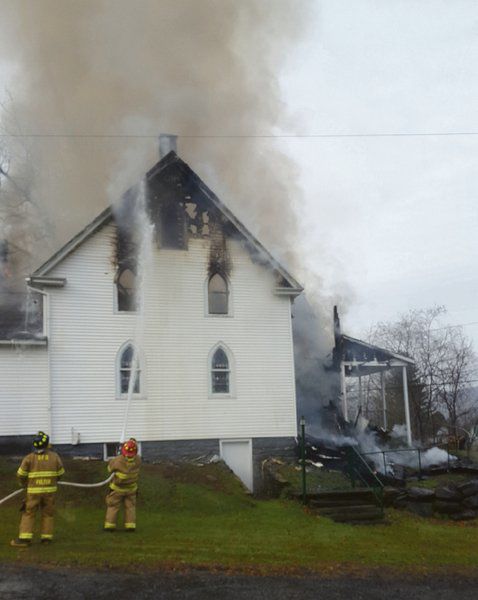 Michael SteeleFlames are shown erupting from the roof and steeple of the East Branch United Methodist Church on Monday, Nov. 11.

The sanctuary, vestibule and steeple of the East Branch United Methodist church were destroyed by flames, but firefighters saved a portion of the building that housed a community food bank, according to Delaware County Deputy Fire Coordinator Dale Downin.

Downin said the fire is believed to have started in the steeple.

“The fire started high,” he said. “It was heavily involved when firefighters got here.”

He said the blaze was reported by a passerby between 9 and 9:30 a.m. The East Branch Fire Department, commanded by Chief Rod Keesler, was on the scene quickly and was later joined by firefighters from Hancock, Cooks Falls, Roscoe, Downsville, Walton and Deposit. The Hancock Fire Department ambulance stood by, though no injuries were reported. About 75 firefighters were involved in the effort, he said.

Downin said departments from a wider radius were called to stand by for departments involved, and firefighters from Sidney and Liberty came to help roll up hoses when it was over.

That help was needed, he said, because more than a mile of hose was laid out.

He said tankers initially shuttled water from the nearby Firemen’s Park, adjacent to the east branch of the Delaware River, but the shuttle was later replaced by 6,000 feet of five-inch hose.

Downin said the fire was under control by 11:30 a.m. and that an excavator was brought in to knock down debris so firefighters could extinguish hot spots. He said the fire spread quickly because of the “balloon construction” of the building and a lack of insulation. Balloon construction leaves large air gaps within walls and allows fire to travel quickly.

Downin said Monday afternoon the cause of the fire had not been determined, and investigators from the state Office of Fire Prevention and Control would join in the investigation.

Pastor Dora Odarenko said late Monday afternoon that it’s too early to tell what the future holds for the church. She said she expects insurance adjusters to look at the ruins Tuesday.

“We have good insurance for the church,” she said.

Odarenko said the church office was in the same area as the pantry. She said that part of the building, a later addition to the church, was “trashed,” but seemed structurally intact. A parsonage, just a few yards away across a driveway, was not damaged, she said.

“It was a beautiful old church with beautiful old pews and memorial windows,” she said. “We have to keep knowing that God is with us and God is in that place, even though it is burned and destroyed.”

Odarenko said she is grateful for a “wonderful outpouring of community support”  and the “heroic” efforts of the firefighters.

“It was a raging fire. It was just amazing,” she said.

Looking ahead, she said, “We look forward to how we can rebuild.”

She said there have been offers of meeting space for the congregation, but she does not yet know where the church members will meet on Sunday. She urged those who are interested to check the church’s Facebook page.