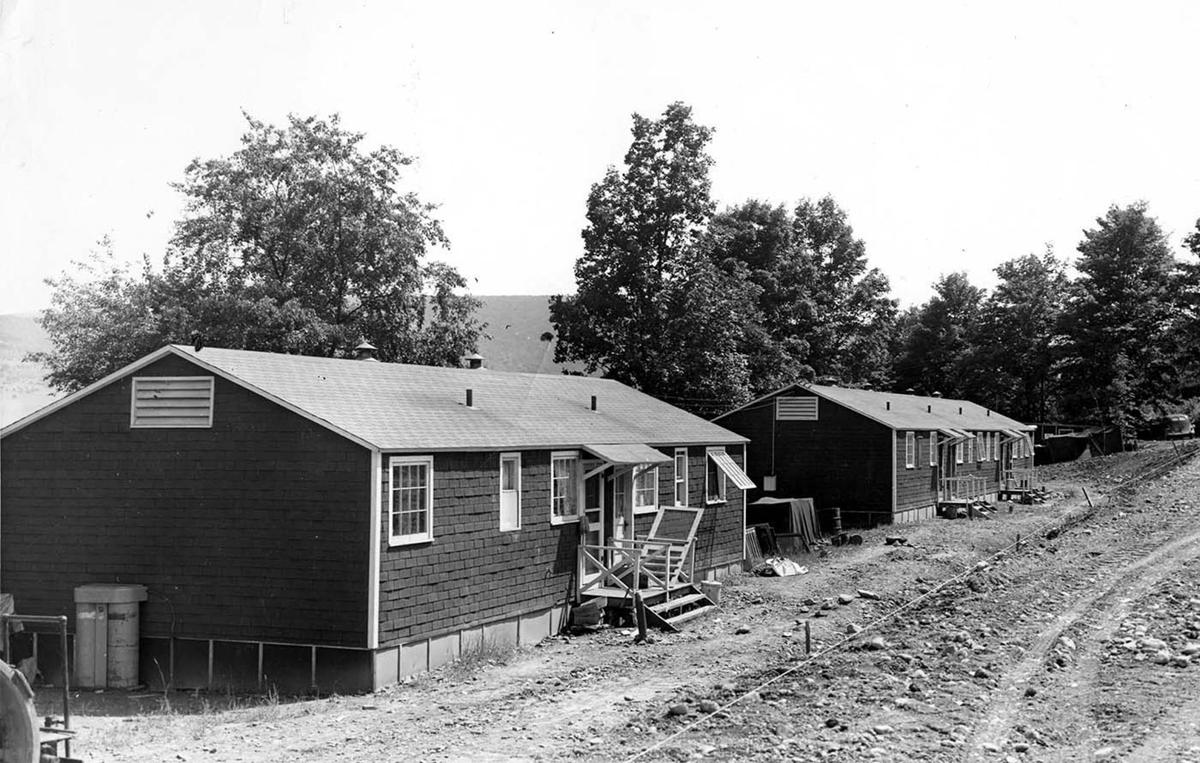 To accommodate a surge in enrollment by veterans after World War II at Hartwick College, wooden housing units were brought in from Sampson Naval Base and other Army bases. These buildings were nicknamed ‘Splinterville.’ 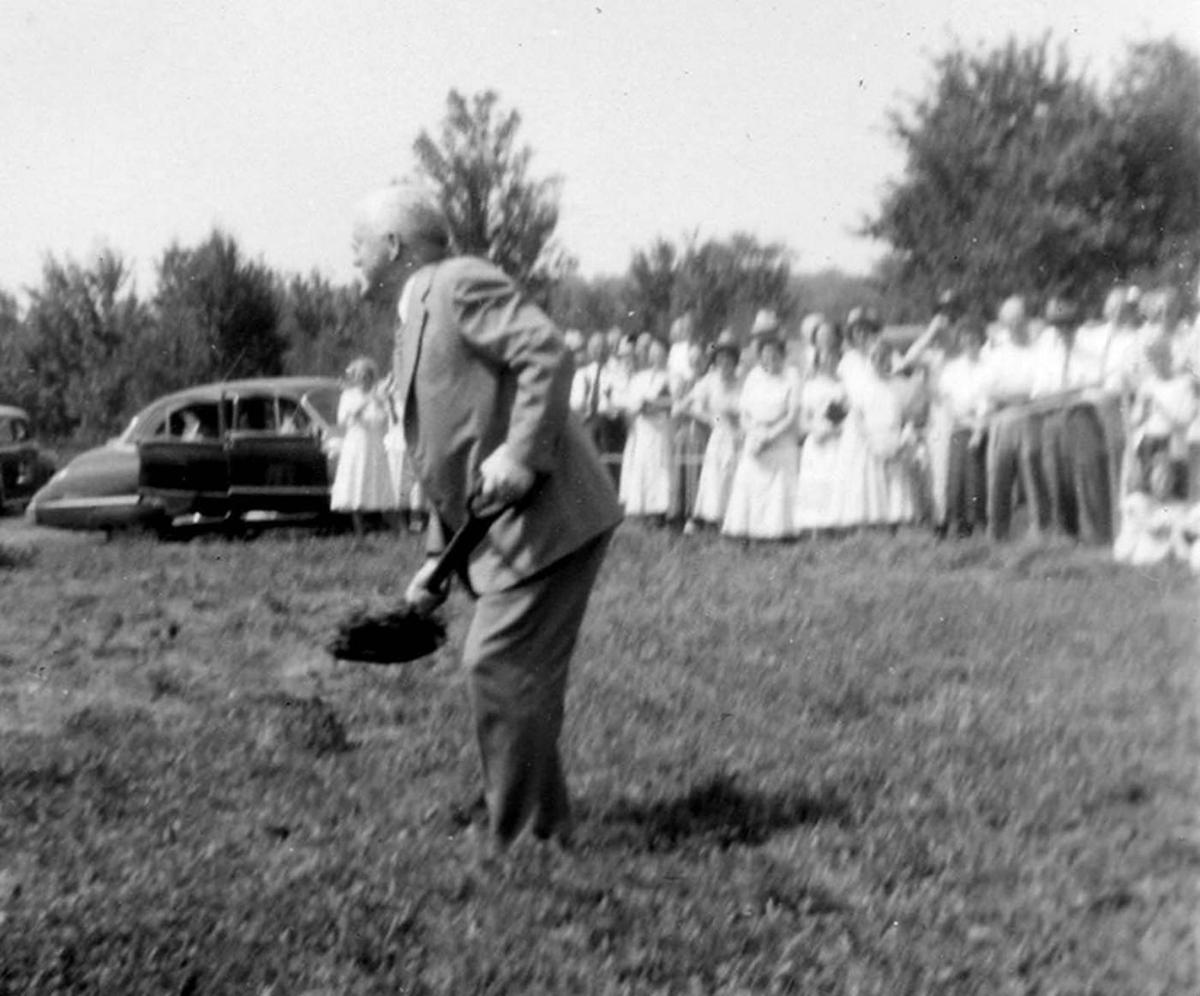 Taken by then-student Frances Green in the summer of 1948, Dr. Charles Hunt, president of the State University College at Oneonta turns over a shovelful of dirt at a groundbreaking ceremony on the new ‘upper campus.’

To accommodate a surge in enrollment by veterans after World War II at Hartwick College, wooden housing units were brought in from Sampson Naval Base and other Army bases. These buildings were nicknamed ‘Splinterville.’

Taken by then-student Frances Green in the summer of 1948, Dr. Charles Hunt, president of the State University College at Oneonta turns over a shovelful of dirt at a groundbreaking ceremony on the new ‘upper campus.’

Today, The Daily Star continues its series of features looking back on the newspaper’s 125th years of publication. This weekend highlights our local life and times immediately following World War II.

There have been many ways our country has expressed its thanks to veterans of war for their service. But there is probably not another far-reaching way the veterans were thanked for their service than after World War II. Namely, the G.I. Bill. This act of legislation had a profound effect on the way our region grew after the end of the war.

Some veterans went to college, others built homes, courtesy of the G.I. Bill —which was formally known as the Serviceman’s Readjustment Act of 1944. After World War II, a key word became “readjustment” in just about all walks of local life.

Around 1940, the average G.I. was 26 years old and had one year of high school as his only education. The G.I. Bill promised returning veterans a chance to go to college to advance themselves. At first, many university presidents said the idea would be disastrous. The president of Harvard University said the initiative would create “unqualified people, the most unqualified of this generation,” coming to college.

However, the discipline and ethics taken from the military made many students want to get ahead. The idea of doing a job, and doing it well during their time in military service, meant promotions in rank - qualities that could transfer to education and subsequently into the workforce.

There were a lot of takers for going to college, and it wouldn’t be long before the Oneonta State Teachers College, Hartwick College and Delhi College experienced huge growth, as more than 101,000 returning New York veterans expressed interest in higher education. This unprecedented demand moved Gov. Thomas Dewey to get the wheels turning for expansions on state-run campuses across New York. Dewey established a first budget of $67.5 million to cover a five-year development period, and formed the State University of New York system in 1948.

Economic conditions after the war put some delays on providing housing and classroom space for students. The Civilian Production Administration put new construction of dormitories on hold in 1946, in favor of the nationwide Veterans’ Emergency Housing program. Federal help for Hartwick College didn’t begin until the fall of 1946, and when the help began, a total of seven wooden structures were erected, to include 15 family and 90 single units.

The dwellings were obtained from Army and Navy barracks, brought to Oneonta and rebuilt on the campus. They were nicknamed “Splinterville.” As the 1950s through ‘70s came along, these structures were replaced by current brick dormitories. Off-campus, Hartwick purchased the former Parshall Hospital on Myrtle Avenue, apartments today, for more housing of student veterans. It was renamed Buckley Hall.

At the Oneonta State Teachers College, the large building at the top of Maple Street, commonly called “Old Main,” had become crowded after the war. Expansion was slow because of postwar economic conditions as well. Dr. Charles Hunt, president, held a groundbreaking ceremony during the summer of 1948, but the new “upper” campus wouldn’t see much growth activity until around 1950. Like Hartwick, barracks-style housing was established on the Delhi College campus.

If the veterans didn’t seek a college education, the G.I. Bill provided the opportunity to purchase a home. Some college graduates also wanted to buy homes, and these opportunities changed and created new neighborhoods in and around Oneonta.

An August 1946 edition of The Oneonta Herald reported the first postwar housing project would be on upper East Street, in an area between today’s entrance to the Oneonta Middle and High School and Bugbee Road.

Called “Eastland Heights,” Oneontalawyer Owen C. Becker said, “The G.I. will have the first preference in the purchase of the homes we are going to build ... for $10,000 or less.” Becker headed a corporation to finance the new development. The nearly 50-acre parcel of land had been owned by Oneonta pioneer Daniel Gifford and successive family generations. The purchase price was not disclosed, but Becker revealed that assessed valuation in Oneonta would increase by $1 million. Becker said the new development would yield a total of 120 lots. Part of the parcel was outside of city limits, which required annexation.

Oneonta’s inner-city neighborhoods changed in the years following World War II. Families and renters moved to these and other newer developments, including Woodhaven Park in West Oneonta, and near Country Club Road and today’s state Route 205 in the Oneonta Plains area. Several new homes were also built on lower Oneida Street, west of Country Club Road. Many of the older inner-city homes were later converted into apartments or off-campus housing for Hartwick College and SUNY Oneonta students.

The workforce in our region was turned upside down with the end of World War II. Residents of the village of Sidney went wild with the news of the end of the war, especially those and thousands of commuters who worked at the Scintilla Magneto Division of the Bendix Aviation Corp., which we know today as Amphenol. Suddenly here was a major employer, which had been operating on a 24/7 basis, and almost immediately it was ground to a halt. At the peak of the war, Scintilla employed 9,000. By November 1945, there were 950.

Slowly, peacetime contracts began arriving and workers gradually returned. Scintilla turned its production line to aircraft and other commercial types of magnetos. Other regional employers who had converted to wartime production temporarily halted operations and went back to other lines of production, such as dressmaking in Oneonta with manufacturing shops at 10-12 Dietz St. and 213-217 Chestnut St.

Economic uncertainty for workers and others became a way of life after the war. At midnight on Monday, July 1, 1946, price controls were ended on just about everything. The limits had been established when the war broke out, as the Office of Price Administration (OPA) began operations. The agency had the power to place ceilings on all prices except agricultural commodities, and to ration scarce supplies of other items such as tires, automobiles, shoes, nylon, sugar, gasoline, fuel oil, coffee, meats and processed food.

Having had the security of no price increases for almost five years, local reaction to the demise of the OPA ran the gamut from joy to downright depression.

The Oneonta Star got some of the reactions, and found that the end of price controls had little effect on business in Oneonta area stores. Many business advertisements seen in the newspaper pledged that their prices wouldn’t go up. Within a week, however, local prices were reported to have gone up 10 to 15 percent on food costs and “grocers freely predicted the spiral would go higher next week and thereafter.”

The Star reported on July 18 that our area wasn’t too concerned about the increases. A huge quantity of meat, the likes of which hadn’t been seen in local grocery stores for several years, became available and caused a stampede of meat-hungry shoppers.

“The price did not matter. Joyously the patrons laid the cash on the line at the rate of 57 cents per pound for center cut pork chops against the last OPA ceiling of 39 cents,” The Star said. One store manager commented, “They’ve been hungry for meat for a long time.” Grocery and produce clerks stood by and watched their butcher colleagues sweat.

The OPA was abolished once and for all on May 29, 1947. Once the Korean War began, similar functions were performed by the Office of Price Stabilization.

In the next Daily Star 125th anniversary entry, in July, the subject will be the local life and times of the 1950s.

In 2015, The Daily Star celebrated our 125th anniversary. We ran  a series of stories looking back at the newspaper and the area in that time.