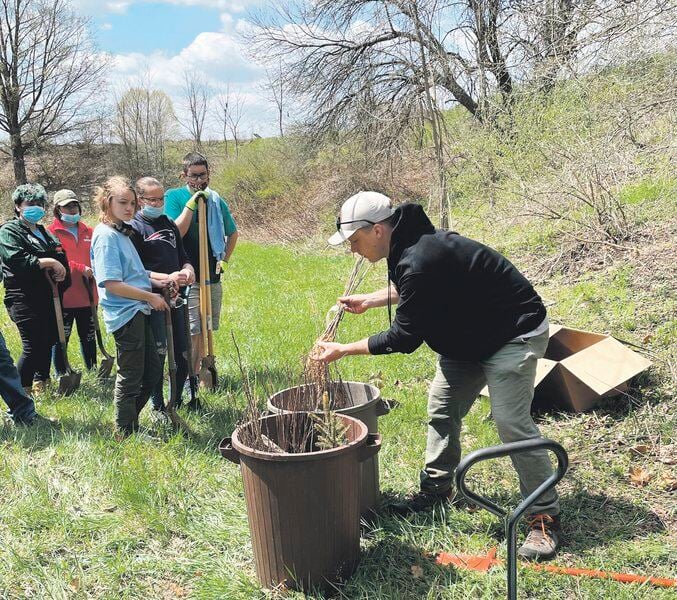 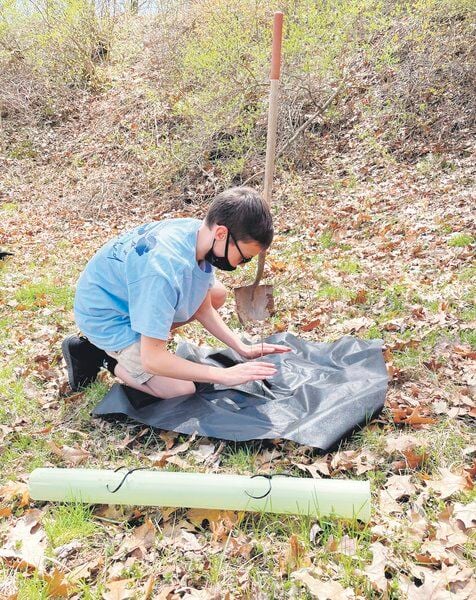 Allison CollinsTroop 1 member and Unadilla resident Connor Borowski, 14, situates a protective weed mat over a hazel sapling during a tree-planting event on Saturday, April 24 in Unadilla. 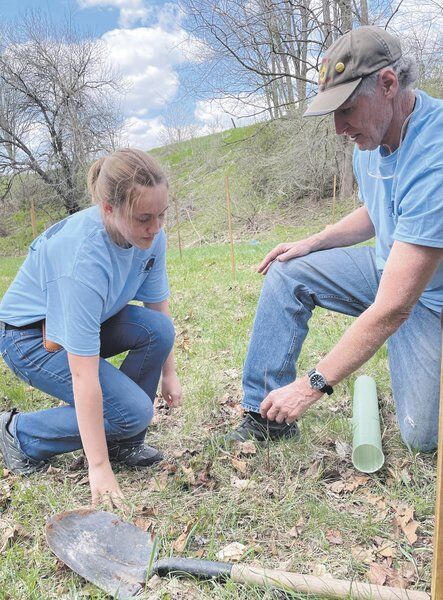 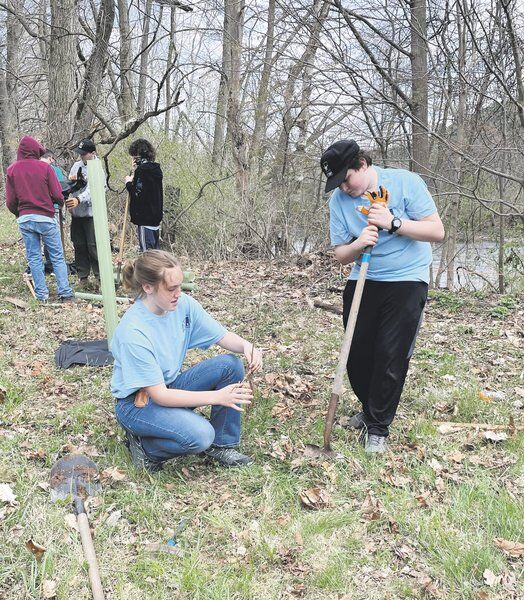 Allison CollinsTroop 1 member and Unadilla resident Connor Borowski, 14, situates a protective weed mat over a hazel sapling during a tree-planting event on Saturday, April 24 in Unadilla.

About 150 trees were planted on a half-acre of land belonging to David and Gail Lapointe, whose Covered Bridge Road property borders the Ouleout Creek. Members of Unadilla Boy Scouts of America Troop 1 helped the Lapointes and officials from the Delaware County Soil and Water Conservation District plant and protect the bareroot stock. The plants, a mix of hardwood and evergreen trees and shrubs, were planted in a former sheep pasture.

Joe LaCourt, program technician with the Delaware County SWCD, said the process began nearly two years ago and aligns with the department’s mission.

“We got in touch with the landowners because they wanted more native vegetation down there, and we were put in contact with them through a local farmer,” he said. “Our soil and water district is always seeking out landowners or farmers and producers who have land adjacent to a stream and are interested in planting to fill that area in.”

The Lapointes said they’re pleased to see the land reclaimed.

“What they’ve been trying to do is put these bio-barriers along the creek,” David said. “This will help our retention and keep things from getting in the Ouleout and Susquehanna.”

“I grew up (on this land) and it used to be a sheep farm,” Gail said. “We don’t have sheep anymore, but where we’re planting used to be a sheep pasture. It’s been vacant and overgrown, and we wanted to turn it into more of a natural habitat and attract more birds and wildlife, so we’re really excited for this.”

The trees, LaCourt said, will form a riparian forest buffer.

“It’s native, woody vegetation and you have your trees — the overstory or canopy, and the shrubs — or understory, and the main purpose of it is having that dense area of forest right alongside the stream to help with storm water runoff,” he said.

“They’re all (plants) that grow well in wetter areas, like around streambanks and floodplains,” LaCourt said, naming species such as sycamore, red maple, tulip trees, button bushes and river birch. “Erosion is another big one; there’s always a multitude of really great benefits for a lot of different environmental reasons. It’s good for trout populations and all the microorganisms and the ecosystems in the stream habitat, but most important and what we’re really going for is filtering out excess nutrients within the stream waters.”

Doing so, LaCourt said, is part of a bigger aquatic picture.

“The larger scope of things is the Chesapeake Bay,” he said. “The Ouleout is part of the Susquehanna, which is part of the Chesapeake Bay, and the (Environmental Protection Agency) has set a TMDL, or total maximum daily load, of nutrients that’s allowable to be discharged into the bay, mainly targeting nitrogen, phosphorus and sediment, and these trees and shrubs do a pretty good job at filtering out those excess nutrients.”

The stock, LaCourt said, was sourced from a state Department of Conservation-run nursery in Saratoga Springs and the process is “completely free for the landowner.”

“It’s funded through one of our conservation partners, an agency out of Tioga County called the Upper Susquehanna Coalition,” he said. “They find a lot of funding for us through local, state and sometimes federal grants. They purchased all the tree stock, the supplies and they help us with the planning … so they’re a really crucial partner.”

Including area Boy Scouts in such plantings, LaCourt said, provides an educational opportunity. Troop 1 Scoutmaster Brian Danforth, he noted, is also a technician with the Delaware County Soil and Water Conservation District.

“We’ve used Scouts in the past and it’s a really good opportunity for them to get outside and learn about conservation and how important trees are to ecosystems, and really everything,” LaCourt said.

Danforth, too, said Scouts benefit from such events.

“We always love to do conservation and community service projects and this dovetailed nicely with the two hours of highway cleanup we did today,” he said, noting that about 16 Scouts, ages 11 to 17, volunteered, alongside about 15 adults and friends of the troop. “There’s a conservation angle for some of the merit badges and extra awards they can earn, so this goes toward that and it’s just a good way to show kids how to care for the environment. The shading (from the trees) will keep the water cooler for trout and the leaves that deteriorate and go into the water help clean it and help the wildlife, so it’s all part of the ecosystem.”

Brayden Eastman, a 15-year-old, nine-year Scout from Unadilla, said he enjoys “helping the community and other people.”