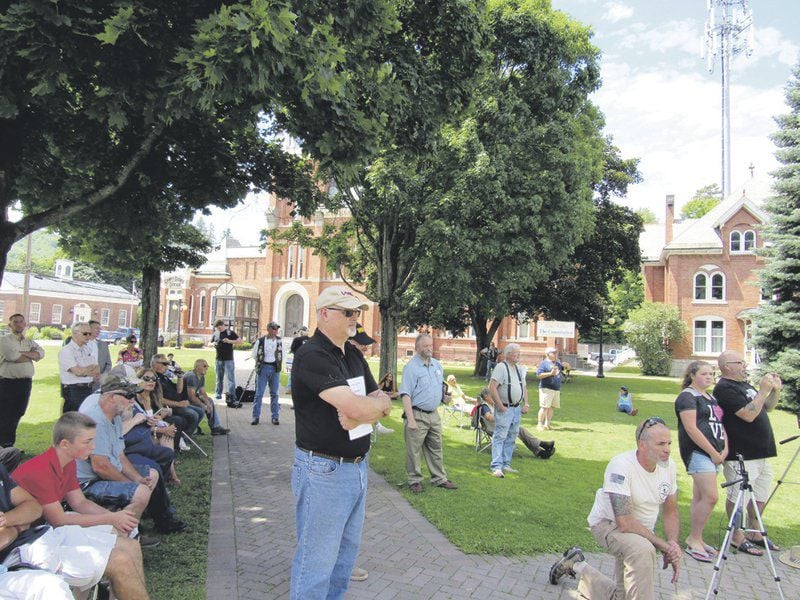 Gun-rights supporters listen to speakers at a rally in Courthouse Square in Delhi on Saturday. 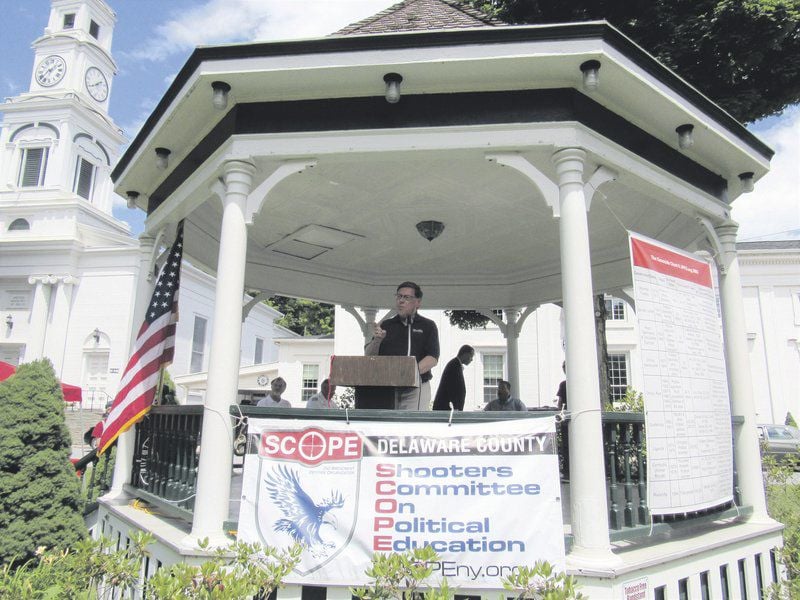 Gun-rights supporters listen to speakers at a rally in Courthouse Square in Delhi on Saturday.

Second Amendment supporters gathered in Delhi on Saturday for a gun-rights rally on Courthouse Square.

A crowd of about 50 people heard from several local politicians speaking on the bandstand during the event organized by SCOPE of Delaware County, the Shooters Committee on Political Education.

Some speakers and attendees called for repeal of the New York Secure Ammunition and Firearms Enforcement Act of 2013, commonly known as the SAFE Act, which introduced some of the strictest gun-control policies in the country. The legislation mandated universal background checks on gun purchases and prohibited some weapons and weapon modifications, among other measures.

“We need to take care of our mental-health crisis if we want to solve our gun-violence problem,” said state Sen. James Seward, R-Milford, who mentioned Remington Arms is in his Senate district*.

Seward described the SAFE Act as an overreach and voted against the legislation. In March, he voted against a law that now prohibits individuals convicted of domestic abuse from purchasing firearms.

Delaware County Sheriff Craig DuMond said that many sheriffs across the state did not support the SAFE Act and that “people want to blame firearms.” Noting that Delaware County has the highest rate of gun suicide in the state, he maintained that a degradation of society, including a lack of employment, community, religion and personal accountability has exacerbated gun violence.

Libertarian candidate for governor Larry Sharpe lambasted Republicans for trying to “hold the line” on Second Amendment rights instead of turning things around and ridiculed the idea of armed school security guards.

Attendees who spoke to The Daily Star agreed that New York regulations infringe on the right to bear arms.

“I think that good people with guns are a good thing,” said Ehren Curbelo of Stamford, who came with her three children and said she didn’t think gun-control laws should be passed to try to protect schools.

Corey Luchetta, who owns F&C Firearms in Stamford, said that the SAFE Act weapons modification bans seem arbitrary and show a lack of gun education from lawmakers. More than one so-called military-style feature on a gun is banned, but something like an adjustable stock simply allows his wife to use the same gun as him, Luchetta said.

“I’ve done my research,” Jonathan Dough of Bainbridge said, pointing to a poster listing genocides of the 20th century it blamed in part on gun control. “The Second Amendment is what our founding fathers put in place to protect us.”

ONEONTA - A graveside service for Robert L. Wood, 82, who passed away May 19, 2020, will be held at 11 a.m. Saturday, July 11, with military honors, in Oneonta Plains Cemetery with the Rev. Mark Montfort officiating. Under current restrictions, all must wear face coverings and maintain socia…